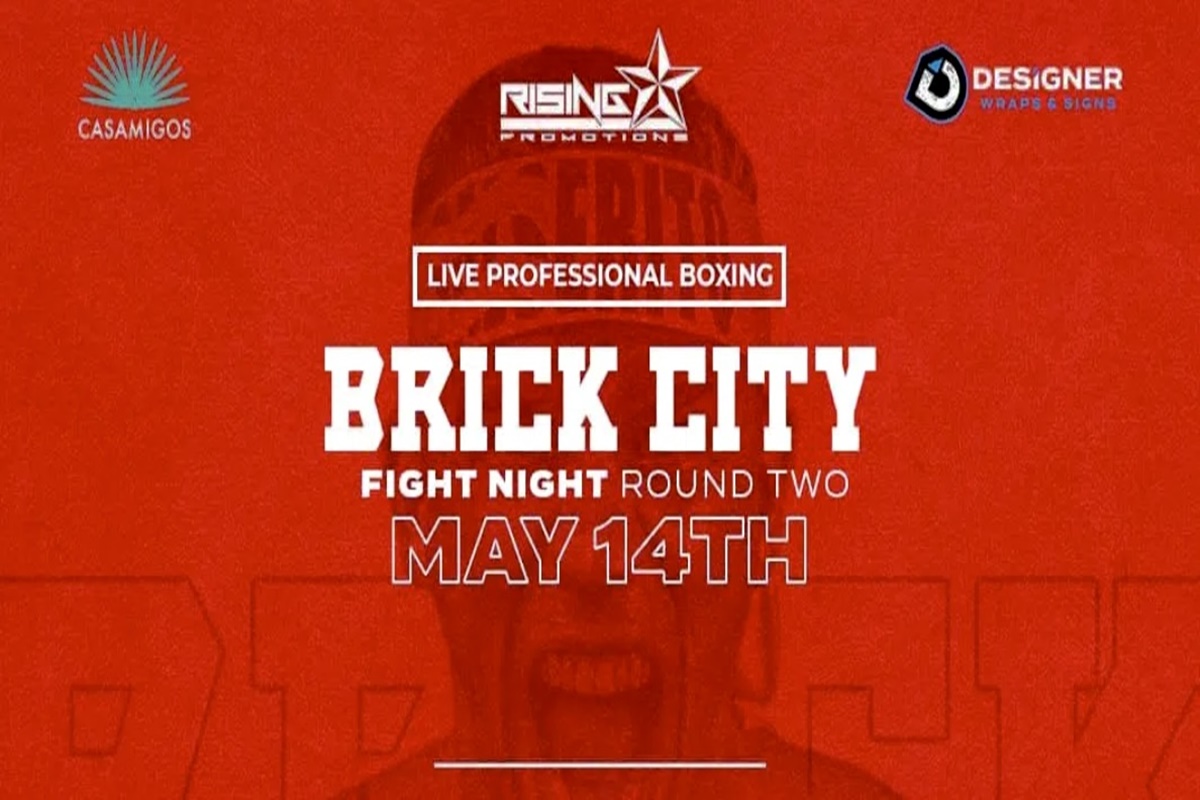 Thomas “Cornflake” LaManna (Rising Star Prom’ns) brought back boxing to Newark, NJ’s historical Robert Treat Hotel on 5/14/22. The Prudential Center has staged many title fights, but the Robert Treat has been the site for club shows developing local talent for many years. Numerous promoters have run here and now Cornflake has moved up from South Jersey to pack the thousand-seat ballroom with an SRO crowd!

Ten bouts by matchmaker Renee Aiken gave local undercard boxers a chance to develop against stand-up opposition, with only one upset and only one opponent failing to deliver a yeoman effort. Fans loved the action and it was a lively evening. But it was tough on ringside reporters after ring announcer Alex Barbosa walked around the auditorium with a remote microphone evidently made in Siberia. Little of it was intelligible, but the fans did not care; they just rooted for their favorites. Fred Blumstein kept time.

In a scheduled eight, Emmanuel Rodriguez, 118, Newark, 11-0 (6), stopped Juan Gabriel Medina, 115 ½, La Romana, DR, 14-10 (12), at the end of 6. The bout was a tense , tactical contest with no big rounds either way, but a combo of size, strength and sharper hands held the edge for the local favorite throughout. Medina switched from countering to initiative in taking the third, while both were cautioned by referee Benjy Esteves; Medina for low blow and Rodriguez for rabbit punch. Emmanuel opened fast in the fourth with lead rights and sweeping lefts to regain control. He landed a jarring lead right late in the fifth and continued it into the fateful sixth. Juan Gabriel appeared tiring and fading and surrendered in his corner at the end of the round. Rodriguez was ahead on all cards, 58-56 and 60-54 twice.

In a good fight with an unhappy ending, Andy Dominguez, 108 ½, Bronx, 7-0 (5), stopped Edwin Reyes, 108, Madison, TN, 8-8-3 (5), in 1:23 of the fourth , scheduled 8. The compact Dominguez bored in from a squared stance and worked short, straight punches effectively. The game visitor was very much in the fight, but lacked the tight discipline of the local favorite. Edwin began taking a beating in the third. In the fourth, Reyes tried to bail out with a sweeping left in an exchange. He missed completely as Andy ducked under and the momentum pulled him off balance. Dominguez quickly tapped him with an opportune right and he went down. But the punch was not a knockdown punch in its own right. It merely took advantage of Reyes being out of position. He bounced right up, clear headed and protesting the knockdown. Referee Mary Glover stopped the fight and called a TKO at 1:23. This was probably because Reyes was not following referee’s instructions. But it did not sit well with either the loser or the crowd. Edwin paraded around the ring calling on the crowd for support. They booed the stoppage, because it had been an all-action contest.

A third scheduled eight ended at 2:10 of the sixth as Brian Ceballo, 158, NYC, 13-0 (7), stopped Gerald Sherrell, 156, Pittsburgh, 10-3 (5). A good match on paper turned into a one-sided drubbing by the local favorite’s precise single-shot punching. Brian started with long lefts, then added the right. Sherrell was rocked by a left, then a right, to close the third. He was jarred again by a right in the fourth and was in full flight as Ceballo pounded him to the bell in the fifth. Every punch was landing hard in the sixth when the underdog’s cornerman mounted the apron and signaled to referee Harvey Dock to stop the bout.

It was only scheduled four but one of the biggest fights on the show in fan interest as Anthony Johns, 117, Newark, 3-0 (3), faced Gilberto Duran, 118, Yakima, WA, 4-6 (4). The contest was nearly over in the first exchange. A counter left hook buckled Duran’s knees almost to the floor before he stood back up. Ref Glover gave him a count. The tall, rangy visitor tried to get back into the fight and gave the fans more than their money’s worth, but took a hopeless drubbing. The compact favorite skillfully stepped in and punched accurately to dish out a beating in torrid action. In the third, Duran was cornered and leveled by a pinpoint right followed by scorching left hook that sprawled him out, finished and bleeding from the left eye, as fans went crazy. He was still wobbly when the doctor got him up minutes later.

The only upset was a majority decision gained by Jostin Ortiz Maysonet, 126 ½, Alta Vega, PR, 4-0 (3), over John Leonardo, 125, Manalapan, NJ, 7-1-1 (4), 6. The flat-footed and sturdy favorite came out banging and it looked like it would be a routine win. But the Puerto Rican underdog began switching left to right and back while circling away in the second, frustrating the favorite’s attack. Leonardo tried to increase pressure in the third but got nailed by a big right. In the fourth, it was a left hook by the underdog that swung an otherwise close round. Maysonet seemed to be losing his mobility in the fifth as Leonardo tried to apply pressure. But a sneak right late in the final round seemed to nail the decision for the underdog. Ron McNair scored 57-57 while Anthony Lundy and John Signorile both had 58-56 for Maysonet. Eddie Claudio refereed.

In an earnest but somewhat monotonous six, Robert Terry, 155 ½, Jersey City, 6-0, unanimously shut out (Jacklyn Atkins, Lynne Carter, Mark Consentino) veteran Evincii Dixon, 155, Lancaster, 10-30-2 (5) . The tall, rangy visitor relied almost exclusively on the jab while the shorter favorite circled away, led him on, worked the body and mixed in rights to the head. A workmanlike performance by the dominant winner. Claudio refereed.

Jose Nieves, 122 ½, Woodbridge, NJ, 3-0 (2), took one punch to get rid of the only opponent who failed to put up a game effort, David Ashley, 116 ½, Rock Hill, SC, 0-2 . Nieves charged out and threw a left hook to the body. The underdog folded to his knees and then put on a histrionic performance of trying to struggle up while too hurt to continue. Ref Glover obliged with a TKO at 0:26 of a scheduled four.

Another visitor got stopped in one, but not without a game effort. Tall and rangy Kahshad Elliott, 151 ½, Plainfield, 2-0 (2), battered stocky Tray Martin, 153 ½, Columbia, MO, 3-6 (2), to a TKO at 2:53 of a scheduled four. Martin was immediately rocked by a booming left-right combo in the first exchange. He circled the ring and tried to hang in, but was jolted whenever Elliott decided to cut loose. Late in the round, with Martin in a corner, a left hook and hesitation right buckled his knees, but he stood back up into a booming left hook and crumbled. Still he gamely got back up, when Benjy rescued him.

David Roman Curiel, 146 ½, Paterson, 5-1-1 (1), was too sharp for game Margarito Hernandez, 145 ½, Wapato, WA, 2-2-1, in a good four. After dropping a feel-out first, Curiel began letting his hands go in the second. Action was brisk, with the flashy favorite dishing out a beating to the stolid underdog. Curiel was bailing out with rights in the third and Margarito was just surviving. The final round was more merciful. All cards (Lundy, McNair, Signorile) 39-37. Dock refereed.

Gian Garrido, 166, Queens, 5-0 (4), and Derrick Vann, 170, Phila., 1-3, opened the card with a crowd-pleasing and hard fought scheduled four at 168. The mobile and switch-hitting underdog got off with some good combos, but the solid and aggressive favorite quickly began tracking him down and dishing out punishment. Garrido swarmed and battered him in a heated second, with Vann losing his mouthpiece twice. He was unable to come out for the third.

Yet another development in the Raphinha transfer saga has emerged on Tuesday. The Brazilian has been linked with several clubs this summer, with a...
Read more
NBA