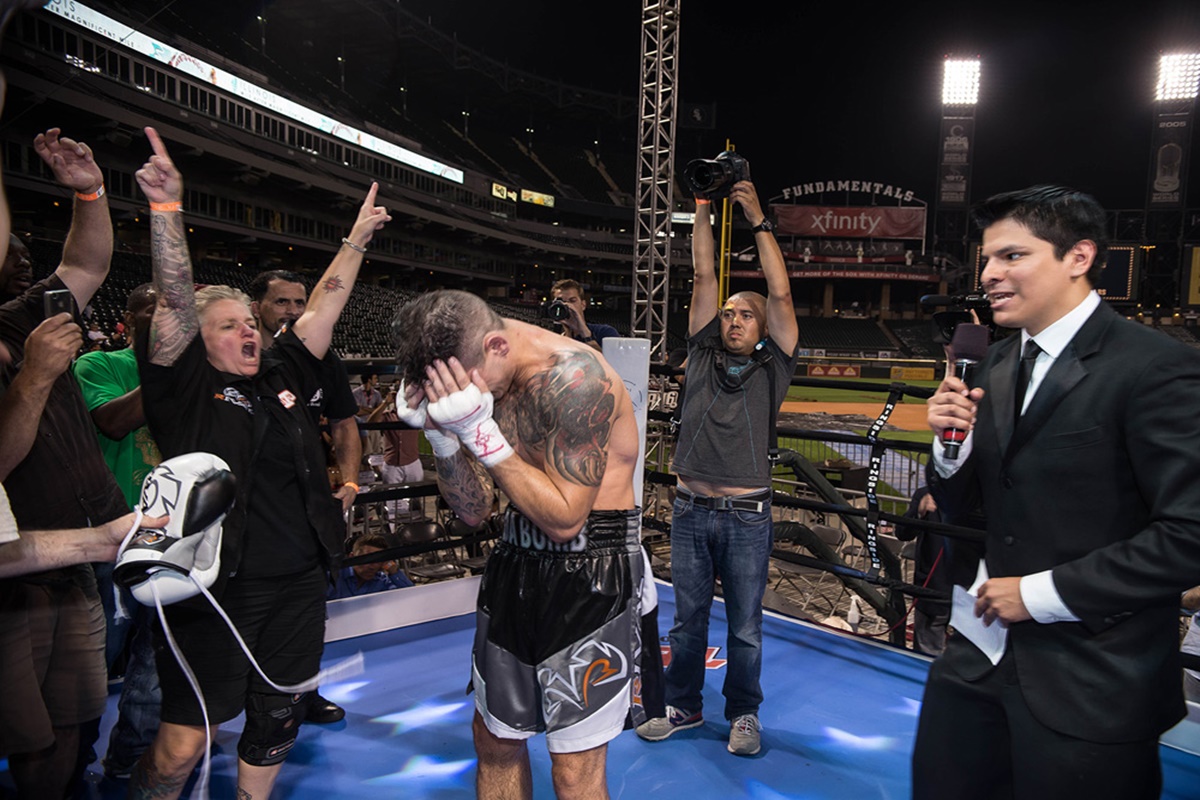 After an absence of 14 months, Don “Da Bomb” George returns to the squared circle on October 16 to face undefeated light heavyweight Sean Monaghan. George, we’ll readily admit, he’s not the best boxer in the world, but he’ll say that nobody has a bigger heart.

George is a warrior. He’ll take three punches to land one. He only knows one way to fight, and that’s aggressively. His right hand can explode off in an opponent’s chin — hence the nickname “Da Bomb.”

That right has produced 22 knockouts in 25 wins. George won the vacant USBA middleweight title four years ago by stopping Maxell Taylor in eight rounds. He subsequently lost the belt to Edwin Rodriguez in 2012.

His courage was never more evident than when he challenged Adonis Stevenson in Montreal, CN. in 2012. Stevenson, a resident of Quebec, was cheered wildly during most of the bout. However, by the middle of the fight, most of the fans were shouting for George, who was floored five times during the contest. To the shock of many, George pulled himself up and mounted a rally in the middle rounds.

George lost the fight, but in a sense, won the war. The respect he received after the bout was universal. George’s 11-year career has been filled with many peaks and valleys. A disputed draw with David Alonzo Lopez in Chicago, ILL., His hometown, hurts him deeply. Three months later he was knocked out by Caleb Truax.

Then he got a break. He was offered a chance to fight for the IBO super middleweight championship in Chicago. He accepted the match, but his opponent was injured during training.

“I guess something happened,” George told Dennis Taylor and this writer on The Ringside Boxing Show last year. “My opponent got injured and then the IBO said I signed the fight agreement so they honored it and let me fight (Dyah) Davis. All of a sudden the fight is at US Cellular Field in the biggest show of the year in Chicago. ”

With his pregnant wife and the rest of his family cheering him on, George, fighting with a broken mitt, defeated Davis by unanimous decision. The victory was sweet for George. He had another title, but this one felt more important. He had gone through hell to get it. A few weeks later it was taken away when George was found to be taking an anti-inflammatory drug for his hand injury, but failed to declare it on a pre-fight application. The Illinois Boxing Commission suspended him and changed his victory against Davis to a no-contest.

George refuses to make excuses. What bothered him was how a number of boxing outlets drew their own conclusions.

“The fact that boxrec and all the websites only released that I tested positive for a banned substance without any other details was very upsetting,” George told this writer via email. “Yes, I failed my post-fight drug test. But I tested positive for Tylenol Three and had a prescription. Many people are under the impression that I was on some kind of steroid. Look at me; I’m a skinny white boy. Do I look like I take performance-enhancing drugs?

“I broke my hand two weeks before the fight and was in a full arm cast until the day of the press conference,” said George. “If anything, the pain medicine slowed me down and hurt my performance. I entered the ring that night with two broken bones in my hand, but there was absolutely no way I was not going to fight for the title that night.

“They did take my win away,“he continued “but they can never take that night away from my family and I. Ever. Put it on the list of sh *** boxing rules along with the countless other things that are broken in this sport, ”said the always-candid George.

A lot has happened in George’s life since the Davis bout, including hand surgery that required a six-month rehabilitation, and the arrival of a set of twins.

“Me wife and I had the most amazing twins. They make life worth living. “

When he was ready, his promoter, Bobby Hitz landed him a fight with light heavyweight, Sean Monaghan.

Monaghan has scored 16 knockouts in his 25 wins. George, who has boxed as a super middleweight (168 pounds) and middleweight (160 pounds), will be fighting as a light heavyweight (175 pounds) for the first time in his 11-year career.

“If you asked me that three years ago, I would have been one hundred percent against the idea of ​​moving up in weight,” said George. I always believed that I belonged in the middleweight division. That is until I got my face smashed in on national television. “

“My main problem is that I always felt physically smaller than everyone I fought. It drove me nuts for years until my wife lied to me and said it must just be my big brain. Obviously, she’s wrong but I’ll run with it, “he quipped.

George, who won the Chicago Golden Gloves and Chicago Park District Tournaments as a teenager, is thrilled to be fighting again.

“I am extremely excited to have this golden opportunity to be on network TV against a quality fighter,” George said. “It’s a can not miss matchup of two sick Irishmen that are willing to fight and put on a show. I can not wait to get in the ring and jam. ”

George is a throwback to another time. He’s cut from the same mold that produced sluggers like Rocky Graziano and Gene Fullmer. He eats punches like candy. All the punishment usually adds up to a short career. George is 31. He knows his fight on October 16 could be his last.

“The fight is a one hundred percent must-win for me,” said George. “If things do not work out on the sixteenth, odds are that I will hang up my gloves. I do not plan on fighting many more times. I will not become one of those terrible boxing stories. I’m not Einstein by any means, but I’m educated and capable of working a nine-to-five job. As you know Mr. Raspanti, boxing is a take sport. It takes and takes from us fighters and very rarely gives back.

“I am prepared for a classic war and willing to leave it all in the ring.”

With the selection of Kenneth Walker lll in this year's draft, the Seattle Seahawks now have one of if not the...
Read more
NHL

Apple's Studio Display is a great monitor for people who want something that offers a native 5K resolution without being an ugly...
Read more
Load more