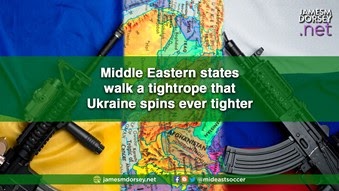 Israel and Gulf states struggle not to fall off the tightrope they walk as a Russian attack on Ukraine makes hedging bets increasingly tricky.

Unlike Israel, the Gulf states may feel that they have more flexibility than the Jewish state that depends on the United States for its regional military superiority and political support in an international community critical of its 54-year-long occupation of the West Bank.

That is, at best, a long-term bet that could prove costly in the short-term and fails to consider any number of potential gray and black swans.

Israel initially sought to walk a fine line. It expressed support for Ukraine’s territorial integrity and sovereignty but did not mention Russia in its statements prior to Russian attack on the East European country. Similarly, it has stopped Baltic states from transferring Israeli-made weapons to Ukraine.

Israel fears that criticism of Russia or material support of Ukraine could prompt Russia to retaliate by intervening in Syria in ways that would prevent Israel from striking against Iranian forces and Iranian-backed militias in the country.

Israeli officials suggested that their juggling act is unsustainable and that Israel will ultimately have to join the global chorus condemning Russia’s actions in unequivocal terms.

They had barely spoken when Israeli Foreign Minister Yair Lapid sharpened Israel’s tone. “The Russian attack on Ukraine is a severe violation of international order. Israel condemns the attack and is prepared to provide humanitarian assistance to the citizens of Ukraine. Israel has long experience in wars, and war is not the way to resolve conflicts,” Mr . Lapid said hour after the attack.

Prominent Israeli journalist Anshel Pfeffer tweeted that the comments were “rather bland in comparison to that of other governments but still a major departure from Israel’s steadfastly neutral position throughout the Putin era. ”

Israeli concerns about Russian retaliation in Syria put Israel in an awkward position as it potentially juxtaposes the interests of the Jewish state with the potential plight of some 140,000 Jews in Ukraineonce home to the world’s third-largest Jewish community.

Israeli officials suggest that they will help those Israelis and Jews who flee Ukraine and make their way overland to Romania, Hungary, Poland, Slovakia, or Moldova.

Israel and the Gulf states appear to have adopted different strategies in responding to the Ukraine crisis. While Israel has sought to avoid Russian ire by not adopting anti-Russian measures and publicly beating around the bush, Gulf states like Saudi Arabia and the United Arab Emirates seemed to reach out to Russia and China in ways designed to signal both powers as well as the United States.

The Saudi and UAE moves appeared to respond not only to a desire to hedge bets but also to public opinion in the region that in the decade since the 2011 popular Arab revolts has become disillusioned with democracy and political change that failed to produce economic development.

that people across the Middle East desperately craved, ”concluded Arab Barometer pollsters Amaney A. Jamal and Michael Robbins in an analysis of their surveys over the past decade.

As the United States seemingly reduces its commitment to the Middle East, “the Chinese economic and development model and, to a lesser extent, the Russian one, have become more attractive to many Arabs… (These) systems, at least as viewed by many in the Middle East, appear to avoid the political tumult of democracy and offer the promise of stability and economic growth, ”Ms. Jamal and Mr. Robbins noted.

Much like Israel, Saudi Arabia too has sought not to be seen acting against Russian interests. In doing so, the kingdom could kill two birds with one stone: keep the door open to Moscow and give US President Joe Biden some payback for his refusal to engage with Crown Prince Mohammed bin Salman. Mr. Biden has snubbed Mr. Bin Salman due to the 2018 killing of Saudi journalist Jamal Khashoggi.

In a phone call last month, Mr. Bin Salman’s father, King Salman, rejected Mr. Biden’s request for a Saudi increase in oil production that would have depressed prices and reduced Russian income as it massed its troops on the borders of Ukraine.

Oil and gas sales have allowed Russia to amass a $ 600 billion war chest with which it could buffer the initial impact of US and European sanctions that are likely to tighten as Russian forces attack Ukraine.

What makes the rebuff of Mr. Biden remarkable is that Saudi Arabia has long balanced global supply and demand in ways that benefited Western economies, even if it meant less income for the kingdom.

Probably coincidental in timing and unrelated to the Ukraine crisis, the UAE said this week that it was acquiring 12 L-15 light attack planes from China, with the option of purchasing 36 more. The sale is not likely to go down well in Washington coming two months after the UAE suspended talks on acquiring US-built F-35 jets, widely seen as the world’s most advanced fighter aircraft.

The problem for Saudi Arabia and the UAE, as for non-Arab Middle Eastern states like Israel and Turkey, is that developments in Ukraine potentially open a Pandora’s Box in which big powers on both sides of the divide could revert to former US George W. Bush’s post 9/11 maxim of “you are with us or against us.”

US sanctions that are extraterritorial in nature and force third countries to oblige or be similarly penalized could accelerate that trend.

At the same time, Russia may look like it has, for now, the upper hand in Ukraine, but that could change if Russia gets sucked into a more protracted conflict that could wear it down. It also remains unclear how much domestic public support there is for Russian President Vladimir Putin’s incursion into Ukraine.

The bottom line is that neither Russia, certainly if it is bogged down in Ukraine, nor China, is willing or able to replace the United States as the Gulf’s security guarantor. As a result, hedging bets may be one thing; another is not acting against Russian interests while acting against US interests.

In the end, Middle Eastern states risk falling off a tightrope that is rapidly being spun ever tighter.

To watch a video version of this story please click here.

A podcast version is available on