Mike Tuck reflects on his historic weekend for the Sharks 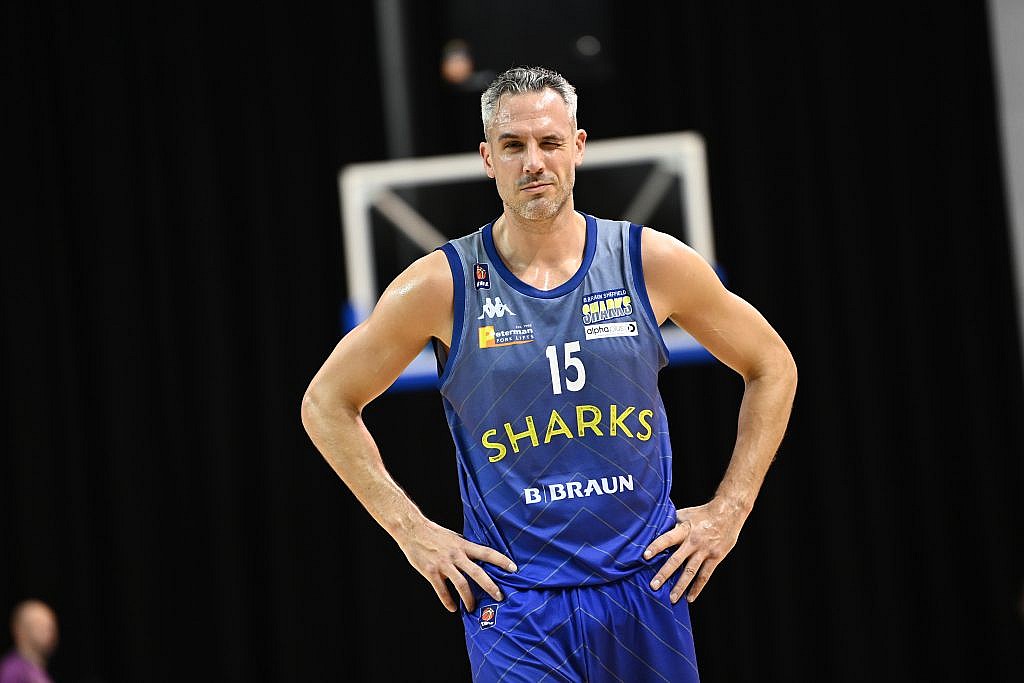 It has surely been on the minds of so many across the BBL for some time now – when was the legendary Mike Tuck going to carve another epic achievement into B. Braun Sheffield Sharks folklore and become the club’s all-time leading points scorer !?

Well, this past weekend in the BBL, the Sharks stalwart achieved the feat in style as he passed Todd Cauthorn’s total of 4,253 and broke the 2,500-rebound mark as well in a bumper weekend of milestone moments that saw the British Basketball community erupt with adoration for the Sheffield captain.

We caught up with Tuck recently to reflect on his achievements.

“I’m still a little bit in shock, but it’s a big deal for sure. One of those milestones you never really dream of ever getting to, and when I first arrived at the Sharks I would have never, ever thought in a million years I’d be at this point.

“To get here and take over a legendary guy like Todd Cauthorn really means a lot to me and I’m just really grateful to the Sharks organization for having me, sticking by me all these years and helping me get to this point.

If I was not already aware of it (the record), people were going to make me aware of it, because for the last month it is all people are talking to me about, so I am kind of glad it is over to be honest so I do not have to worry about it and it does not become a distraction for the team.

“It opened my eyes to how big a deal it was, and I’m just so grateful.”

Needing just four points going into Sunday’s game against the Surrey Scorchers to break Cauthorn’s record, Tuck powered his way to 16 overalls on the day and blitzed his former teammate’s total in the process.

The Sharks would eventually go on to secure a five-point victory, and whilst the moment itself of breaking the record was naturally one that Tuck will cherish, he remarked on another moment a few hours after the game was over that really made the magnitude of the achievement hit home.

“I was aware that it was only four points at the beginning of the game, then I came out and had a putback so in my head I knew how close I was to matching or breaking the record, then I came off a screen at the top of the key and right in my sweet spot, drained a three-pointer and I was so fired up, did the fist bump, and it was done.

“It was so nice to have the Surrey announcer declare that I’d broken the record and it was a strange feeling to have the away crowd give me a big cheer, but I was definitely feeling the love from across the league on Sunday and since .

“On the coach home from the game we were watching the Cheshire match and even their commentators were talking about it and saying really nice things, and I was getting so many messages from everybody, so it opened my eyes to how big a deal it was , and I’m just so grateful.

“We’re in a good place… and I’m excited to see how the rest of the season goes.”

Such has been the nature of the early stages of the season, with the pandemic still causing postponements and rearranged fixtures, it has been an up-and-down opening to the season for many teams and difficult to gauge where a lot of clubs are truly at this season.

In the case of the Sharks, they started well but have had a difficult run of results since the new year – with the Scorchers game being their first Championship win in 2022 out of four games – and their veteran leader reflected on the season to date.

“It has been an up-and-down season for us, we’ve made changes in our roster, games have been canceled and Covid has affected us a lot. I felt like we were getting a good footing before Christmas, but then Covid hit us and we lost our way a little, but we’re getting our feet back under us and getting better every game, I feel.

We’re gelling a lot better as a team, we’ve brought in new players who are getting used to the guys and the plays, so once we all get rolling together I think we’ll be a tough team to stop.

“We need to remember though that despite saying all that, we’m still in a good place at the table with six wins and I’m excited to see how the rest of the season goes. I’d like to be in that top four, personally, and it’s good that we’ve already gone through our adversity because we can address it, build some rhythm and hit the playoffs hard. ”

“I’ve got him to thank for my whole career, to be honest.”

With Tuck’s major milestones now secured, another Sharks legend has a major achievement to look forward to as Head Coach Atiba Lyons is one victory away from 250 total in the BBL, and the club captain reflected on the relationship he has with his friend and coach, as well as how proud the club are of Lyons’ impending landmark.

“I could not be happier for Coach Lyons to get to this point and be on the verge of 250 wins in the BBL. Myself having just gone through major milestones and all of that emotion, to have him so close to achieving one right afterwards is such a big deal and I’m so excited for him.

“I’ve got him to thank him for my whole career, to be honest, as he is the guy that kept offering me the contracts alongside the front office here, but I’m just so happy for him because he works so hard every single day and deserves every success.

“He’s got to take all of the criticism and pressure from all the fans and everybody and make sure the team is ready to perform at a really high level, but he does it so well and takes it all in his stride. 250 wins is a big number for a Head Coach in a professional basketball team, so he should be very proud of that and we’re all proud of him for being on the verge of that, for sure. ”

AEW announced its first-ever Owen Hart tournaments earlier this year, and both the men's and women's competitions are in full swing. ...
Read more
Sports

Lemieux Felt Canelo Was Too Small For Bivol, Should Not Fight at 175