Monster third quarter propels No. 2 Stanford to win over Cal, 97-74 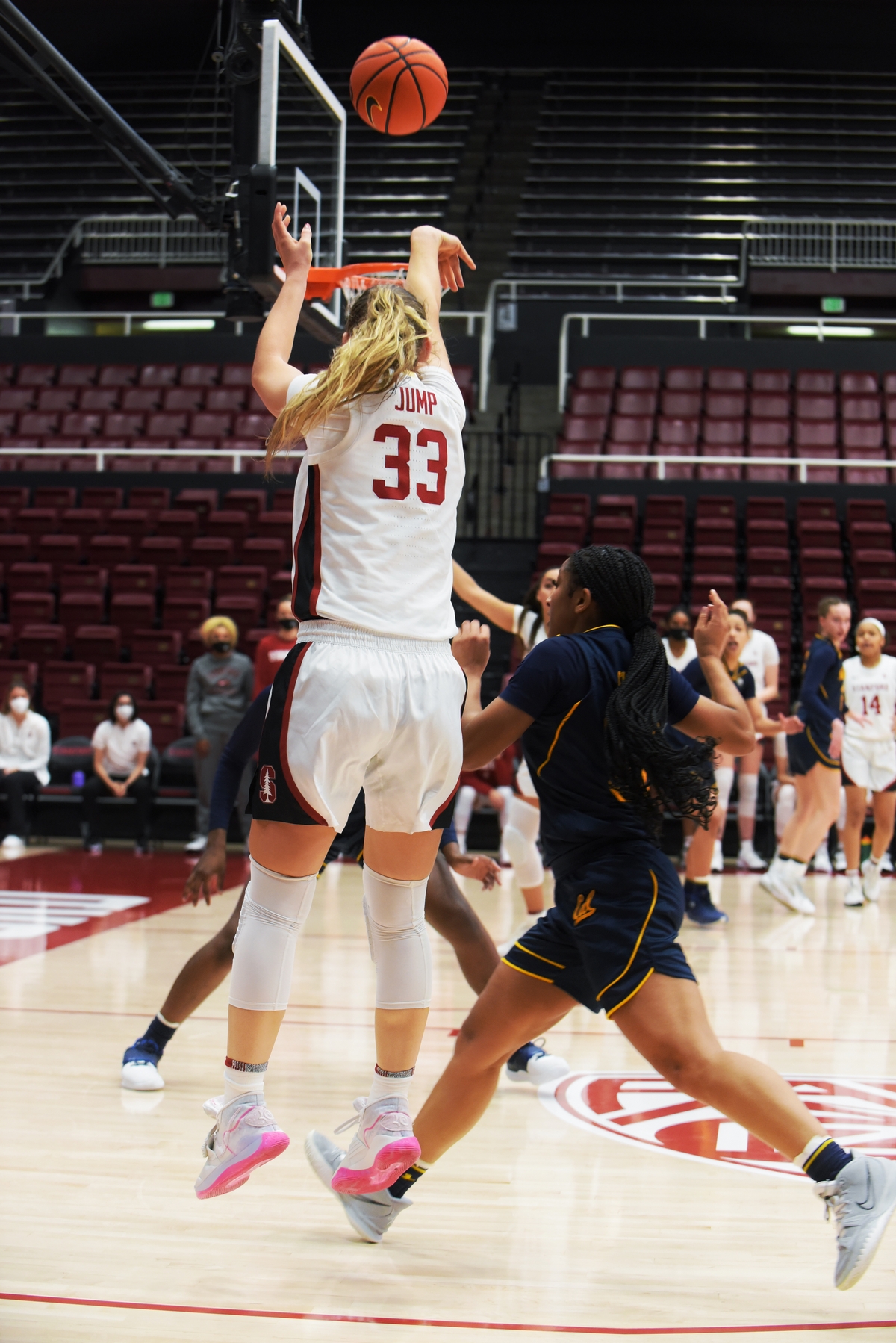 Update: The second game in the series, No. 2 Stanford at Cal originally scheduled for Sunday Jan. 23 afternoon, has been postponed due to health and safety protocols within the Cal program. Tickets purchased for Sunday’s game will be good for the rescheduled date.

However, Stanford took the first contest with a decisive third quarter at Maples Pavilion in front of just family and friends due to the school’s temporary limited attendance policy due to a spike in Covid-19 cases.

In the first quarter, Stanford guard Haley Jones began a dominant ten minutes for the Cardinal scoring the first four points of the game. In her first start of the season, Cal center Fatou Samb countered with a second-chance layup. However, starting with a three-pointer from Hannah Jump, Stanford finished out the quarter on a 16-8 run to head into the second period leading 20-10. Jones led all scorers after the first ten minutes with nine points.

Cal turned the tables on both sides of the court in the second quarter, giving the reigning national champs a run for their money. Four-time Pac-12 Freshman of the Week, guard Jayda Curry, had an outstanding ten minutes, scoring 13 points and leading all scorers at the break with 16. The Bears outscored the Cardinal 32-22 in the period to tie the game up . Also, Cal shot 58% (15-26) in the second quarter compared to just 30% (3-10) in the first period.

The third and fourth quarters were a different story. Stanford turned up its offense and came out blazing to stop the Bears in their tracks after halftime.

Stanford head coach Tara VanDerveer was pleased with her team’s effort after halftime, “our second half in general but especially our third quarter.”

“We were moving the ball well. We did a good job at the free-throw line. I think overall we had a lot of people contribute obviously. Haley and Fran [Belibi] had a real high scoring percentage. ”

Jump paced Stanford with 10 points in the third quarter, and Jones contributed eight. Stanford’s defense limited Curry to six points. Overall, the Cardinal outscored the Bears a whopping 33-13 in the penultimate quarter to head into the last frame leading 77-55.

The last period was more competitive, with Stanford outperforming Cal just 22-19 in the scoring column and Curry getting back into the offensive groove with eight points. She finished with 30 points becoming the first Cal player to score 30 or more since Jaelyn Brown scored 30 in November 2019 against Arkansas. Leilani McIntosh added 14 points for the Bears.

Jones had a team-high 26 points for Stanford, plus ten rebounds and five assists. Jump contributed 21 points. Belibi had a season-high 20 points plus six rebounds. Cameron Brink was also in double figures with 12 points along with five rebounds.

Stanford guard Anna Wilson, who was dressed and on the bench, sat out the game because she was not feeling well, according to VanDerveer. The coach also emphasized that Wilson’s condition was not Covid related.

Stanford moves to 5-0 in conference play. The next game in the series is set for 4 pm PT on Sunday and televised on the main Pac-12 Network channel and Pac-12 Bay Area.