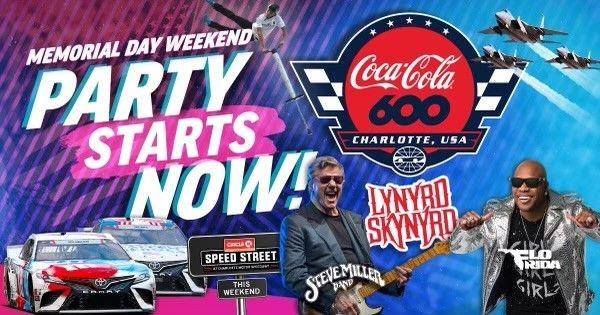 for Fans During Coca-Cola 600 Race Weekend

One of NASCAR‘s crown jewels, the Coca-Cola 600, roars to life this Sunday at Charlotte Motor Speedway, capping off an action packed weekend at America’s Home for Racing. Before NASCAR’s best strap in for the 63rd running of the iconic event, here’s a look at some of the other can’t-miss attractions fans will enjoy during the most patriotic race weekend of the year at the legendary 1.5-mile superspeedway:

From a trio of popular food trucks dubbed “Little Pig Town” to celebrity chef Robert Irvine‘s all-new “Chef Shack” and The Speedway Club’s limited-time Coca-Cola infused menu items, race fans will have no shortage of options when it comes time to fuel up for fun. Located just inside the Gate 4 entrance, Little Pig Town features the culinary offerings of three barbeque-themed food trucks, including Flip Flop’s BBQ’s famed BBQ sundae. New for 2022, Irvine’s Chef Shack, located on the concourse, has pulled out all the stops with a mouth-watering menu featuring a dueling pork grinder, Thai chicken bahn mi and pork barbecue stack. And as a tribute to Sunday’s Coca-Cola 600, The Speedway Club is offering an array of Coca-Cola inspired dishes from pork belly bites to a Coca-Cola infused brownie. Seating is limited and reservations are required.

In addition to show-stopping musical acts, Circle K Speed ​​Street will come to life with high-flying, death-defying stunt shows throughout the three-day event. Fans can step back in time with medieval Full Steel Combat shows or take in the aerial acrobatics of the Xpogo extreme pogo stunt team. If two-wheeled tricks are more your speed, do not miss the King BMX demonstrations or the Globe of Death.

Stars Will Shine at Coca-Cola 600

On Memorial Day Weekend, Old Glory will not be the only stars on display at Charlotte Motor Speedway. Carolina Panthers’ wide receiver DJ Moore, who will drive the Toyota Camry TRD pace car to lead the field to Green Sunday, is expected to be joined by teammates Derrick Brown and Mike Jordan. Other stars confirmed to attend include country artists Ray Fulcher and Jordan Davis, comedian John Crist and actors Griffin Santopietro, Lucy Martin and Clive Standen.

What’s better than riding a giant Ferris wheel during the Coca-Cola 600? Check out all the views of the massive Circle K Speed ​​Street from high above – if you’re not afraid of heights. This year, the Ferris Wheel will be a centerpiece of the Speed ​​Street fun, located just outside of Gate 6.

After a Sunday spin through Speed ​​Street, fans should be sure to head in to their seats early for an electric 60-minute pre-race concert with Hall of Fame rockers Lynyrd Skynyrd. Those who upgrade to a pre-race Track Pass will get stage-front access to chart-topping hits like “Free Bird” and “Sweet Home Alabama,” plus be right up front for driver introductions.

As has become tradition at the Coca-Cola 600, Charlotte Motor Speedway will once again host a moving tribute to the men and women of the US Armed Forces ahead of Sunday’s 63rd running of the iconic race. Highlighting all six branches of service, the patriotic salute will include aerial support by US Army Blackhawks, Howitzer demonstrations, static military vehicle displays and more than 600 service men and women taking part.

Bringing the rousing NASCAR Salutes campaign to a stirring finish, the race’s 600 Miles of Remembrance includes the names of fallen service men and women prominently featured on the windshield of each NASCAR Cup Series car competing during the Coca-Cola 600. In addition, at the halfway point of the race, the 40-car field will be brought down pit road and shut off during a moving moment of remembrance.

New for 2022, The Speedway Club has revamped its champagne toast to give fans even more entertainment in one of the most exclusive post-race celebrations in sports. After watching the victory lane celebrations from a dedicated stage just outside of the winner’s circle, guests will be treated to a four-course meal and live music in The Speedway Club before toasting with the race winner to end the night. Limited seating is available by calling 704-455-3216. Full details online at www.gospeedwayclub.com.

When it comes to driver appearances, no one delivers more than NASCAR’s home track. Throughout the weekend, fans can catch Michael McDowell and Todd Gilliland (Saturday) or Erik Jones and Austin Dillon (Sunday) on the Circle K Speed ​​Street stage, while Daniel Suarez, Ricky Stenhouse Jr., Kurt Busch and Joey Logano are all scheduled to make appearances on the pre-race stage on Sunday. Cominbed with several of the teams hosting fan days and reopening their race shops to fans for the first time since the pandemic began and there’s no place to take in all things motorsports better than Charlotte.

Happy July, Flock Nation. We's another month closer to having our Ravens back out on the football field, but the whole organization...
Read more
Technology

Gotipua dance – A tradition performed by boys in Odisha