New Jersey, Baseball, and You — Perfect Together 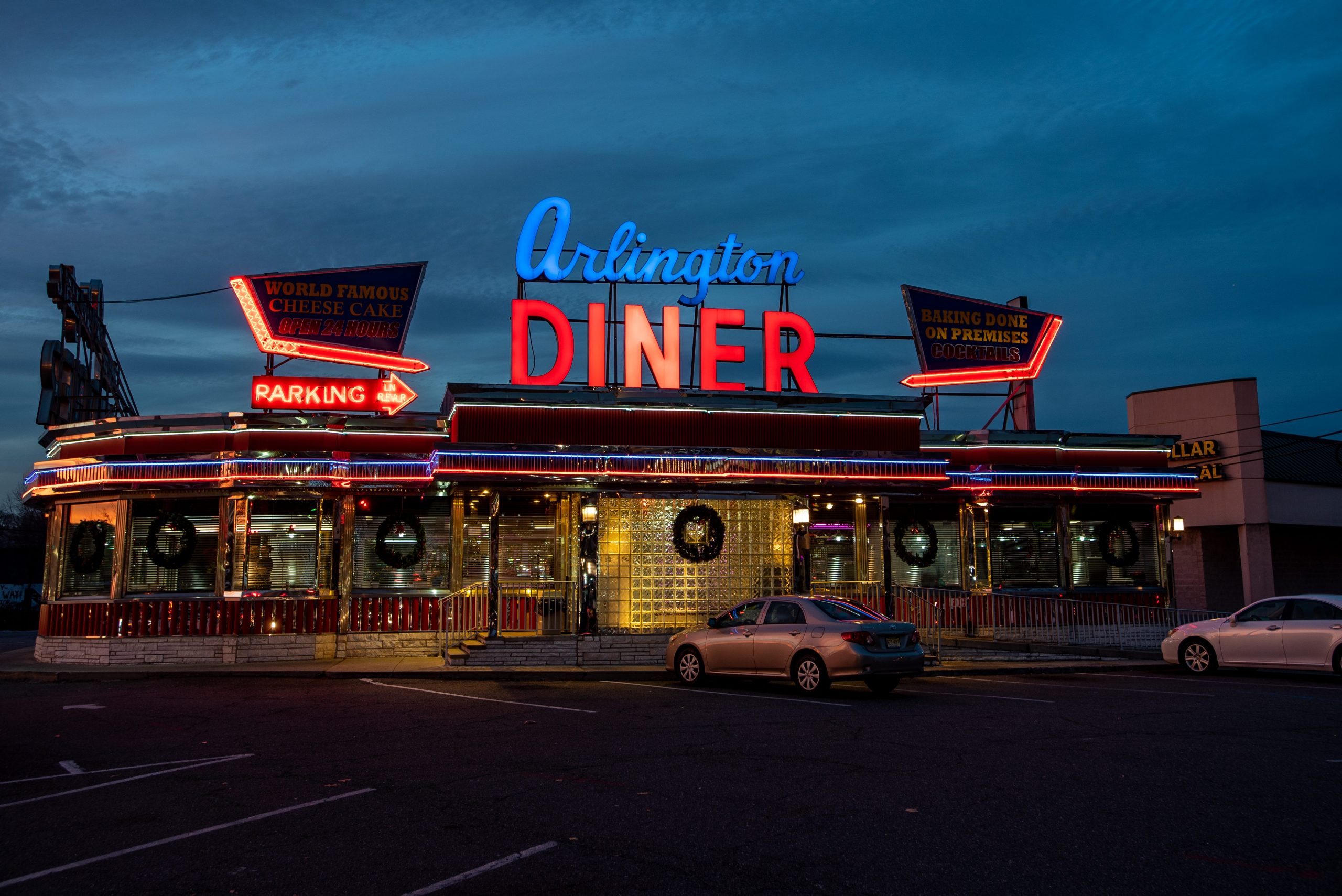 The only thing I value more than books and baseball is breakfast food. My predilection for omelets, pancakes, French toast, blintzes, Benedicts, and the rest of the served-til-11 gang attests not only to a naivete about cholesterol levels (pretty good, actually — thank you, Crestor!) And carbohydrate consumption ( no comment) but my lifelong residence in New Jersey, the diner state. Because New Jersey functions as a corridor between New York and Philadelphia, we have over 500 of the convenient little joints lining our many roadways and most of them serve breakfast all day. Want to have Sunday brunch, just you and dad while mom sleeps in? Head for the diner. Need something at midnight after a concert experience and you already had dinner but you also want something that’s not exactly dessert? Go to the diner. Just broke up with Melissa and you’re alone in a windswept movie-theater parking lot in the twilight hours? Go to the diner; have a waffle. They’ll put whipped cream on it for you. Hell, have two. You’re going to be without her for a long time.

Between the pandemic and the ongoing Major League Baseball lockout, the three legs that comprise the tripod of my existence have been knocked out. I have not been going to bookstores or diners and now there is no Hot Stove League. I used to be an individual but now I am like everyone else, nullifying my life via Netflix and other cable services rather than my own idiosyncratic drugs. For want of a skillet egg dish and a Matt Olson trade was a carefully forged identity bleached out of existence.

How are we all going to come back from this? Expansion. When baseball was geographically misaligned with the American population, what was the solution? Expansion. When the midget-lords of baseball let Bud Selig make off with the Seattle Pilots franchise and were righteously sued, how did they get out of it? Expansion. Collusion and the resultant damages costing the owners a few shekels? Expansion. Kill enthusiasm by slaying a World Series? Expansion. Want to rationalize the schedule and balance out the standings after expanding the playoffs to include almost everyone? Want to throw a sop to the union by creating more jobs? Want to recoup some of the money you lost to COVID, changing tastes, and ham-fisted stewardship of the game? Expansion.

Expansion seems like an inevitability, especially as the national economy rebounds from the disruptions of the pandemic. As attendance trends downwards and dwindles in importance compared to media money, baseball can only grow by expanding the television map. The question is which cities would best serve that goal. In 2018, commissioner Rob Manfred listed Portland, Las Vegas, Charlotte, Nashville, Montreal, Vancouver, and unnamed cities in Mexico as possibilities. In the above-linked Athletic story, Eno Sarris tried to find the ideal candidates but ended up zeroing in on a number of difficulties with Manfred’s picks: Below Charlotte a certain sameness creeps in among the contenders and Charlotte has its own problems. Baseball is largely already in the nation’s top markets; the cities on the next tier share broad statistical similarities in terms of revenue potential and also may have already been captured by an existing team’s gravity in the same sense that Neptune captured Ceres.

That’s why one of the new teams should go to New Jersey. Yes, the increasingly garden-free Garden State lies within the zone of exclusion for three different teams, but (A) we are speaking of aesthetic considerations and what should be rather than what could be; (B) as Sarris’ work suggests, market-violation is almost inevitable, even if the new teams will be outside the boundaries of exclusivity; (C) we have diners. There are other reasons as well — first that the Yankees, Mets, and Phillies’ hold on the area is anti-competitive trash and this area of ​​over 20 million people can handle another team, thanks. Remember, there used to be five ringing New Jersey–the Giants, Dodgers, Yankees, Phillies, and Athletics. Second, we have money and population density. In fact, the counties adjacent to New York City are so packed they make New Jersey the most squished state (with almost 1300 men, women, children, and their dogs per square mile) even though the rest of the place — what you might think of as “The sylvan vista out of which strode Mike Trout”—Doesn’t have very many people in it at all. Some of those counties also rank among the highest in the country by per capita income, which is to say they can afford to buy multiple hot dogs and foam fingers when they take the family to the ballpark.

If you took the Yankees’ Double-A team at Somerset (Somerset County, that is; the team is located in the town of Bridgewater), promoted it to major league status, and slap another deck or two onto TD Bank Ballpark it might just outdraw the Rays. There is a diner just over two miles away to the North and another about two miles away to the East. When I was in college and the Yankees ranged from mediocre to abjectly miserable, my friends and I would drive up to the Bronx at the last minute knowing we would get seats and then afterwards we would drive all the way down to Wo Hop in Chinatown, the 24-hour home to cheap-ass servings of chow fun. It was just the thing for a starving college boy, but it lacked the instant gratification that would have come from having a diner breakfast ready just up the block during which Jersey and Mets fans might argue Bridge-and-Tunnel trades and the annual Commuter series .

As BP alum RJ Anderson wrote of the Stadium Game:

“In an ideal world, the team would stumble upon a large, vacant lot in a densely populated area adjacent to restaurants, bars, and tourist destinations. The surrounding neighborhood would offer sufficient access to trains and buses and would be safe enough to be deemed walkable, easing the burden on developers by removing the need for endless parking lots. The stadium site would sit within hollering distance of corporate sponsors, whose executives could root for the home team every night after work just as soon as the company dished out for costly suites. ”

Yeah; we’ve got that. The nearest train station is even within the ballpark complex.

Baseball’s territorial rules are antiquated. There’s an interesting question to be considered when it comes to the possibility of further dividing baseball’s existing markets versus creating new ones: Would it be more rewarding to try to capture a very high percentage of Portland or Charlotte’s approximately 1.3 million households or to try to entice a higher percentage of the New York area’s 7.5 million households? If Major League Baseball liberalized its rules and considered both, it’s possible it could have its diner food and eat it too. Wee Willie Keeler said you had to hit ’em where they ain’t; Major League Baseball has to go where they are.

We know it’s not going to happen, but a world circumscribed by excessive reality is a hopeless bore. It lacks bagels, blueberry muffins, huevos rancheros, matzah brei, kedgeree, congee, toast with honeyed butter. It lacks the freedom to go places and do things without calculating the danger first. Despite a planet with a surface area of ​​nearly 200 million square miles it’s only as big as your television set and as deep as what the various channels and streaming services have on offer. It’s not just a virus that ails us but the old ways of doing things and the death of the old freedoms. Knock down a smokestack, raise up a wind turbine, plant a mangrove forest, and put a ballpark anywhere one will bring peace to the people, not fatten a monopoly. They can stop you from doing it, but they can not stop you from dreaming, whether you’re in Portland or Charlotte or New Jersey.

The best diners have huge menus. That’s because they know that in the best of all possible worlds no possibility is foreclosed. In the near future another bland ballpark will rise out of an asphalt sea and host a team that physically cannot garner sufficient support to succeed. That is the way of things, but the universe is infinite and in our minds we are free.

The post New Jersey, Baseball, and You — Perfect Together appeared first on Baseball Prospectus.

SAN FRANCISCO, CALIFORNIA - APRIL 16: Head coach Michael Malone of the Denver Nuggets complains about a call during their game against the...
Read more
Sports

Joanna Jędrzejczyk says she'll be the champion again by the end of the year <!-- -->
Read more
Load more