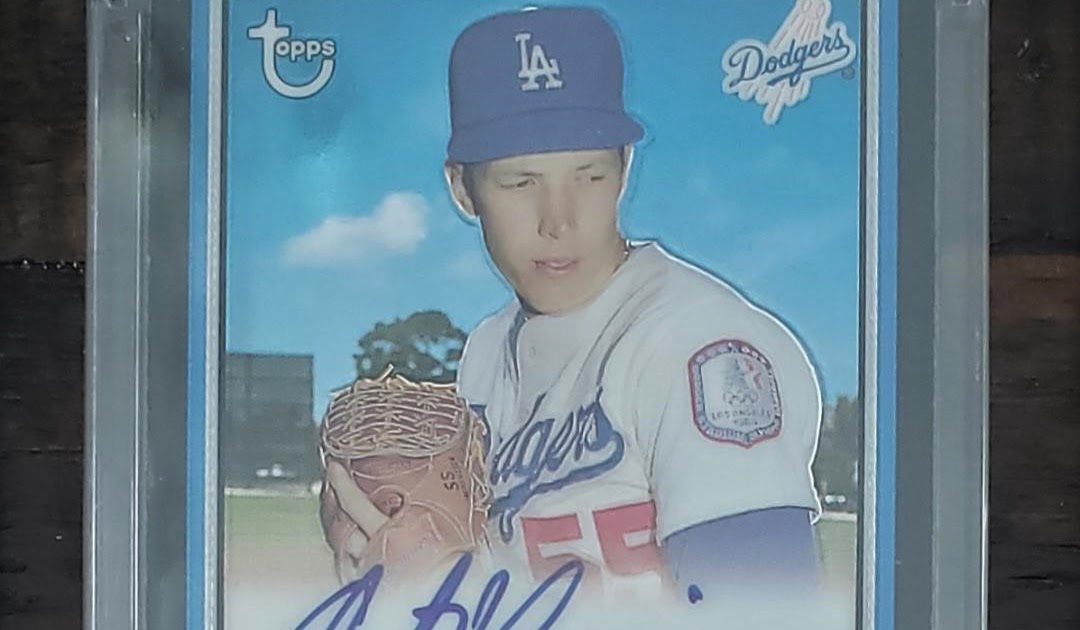 I had intended to show off the incredible perfect storm of a mail day that came my way Monday and use many words to describe the wonderful, but the combination of Super Bowl prep, the start of the Olympics and the winter storm is kicking my butt.

All I have for you is just one card from that haul. But it’s a pretty good one.

It was nothing to comment on his blog. I love that set and have completed it. My appreciation for music is apparently a lot more intense than many of the card bloggers because there should be a lot more people commenting on that blog!

Anyway, Gavin announced he would be sending out something special for the top commenters. I expected something musical in nature, perhaps one of those special customs that he does so well.

But when I opened the elaborate packaging it was nothing less than one of my Top 10 Most Wanted Dodger autographs! The Bulldog! No. 55!

Of course, Gavin is well-known for his love of 2004 Topps black refractors. He even had a post featuring a bunch of them a week ago. I also like them a lot, but I probably have only a handful of non-autographed ones. I do not even know if I have a signed one without going to look (and there’s no time for that).
This is pretty much the main missing card signature in my collection. Out of my five favorite Dodgers – Ron Cey, Sandy Koufax, Orel Hershiser, Hideo Nomo and Clayton Kershaw – he was the only one whose signature was not on a card I owned.
You long-time readers know I do have something signed from Hershiser, signed specifically for “Night Owl.” But that’s a photo (prominently displayed in my card room) and I’m pretty much all about the cards.

This is my 202nd different Dodger autograph in my collection so, yeah, I guess 300 is a mission, although I’m going to have to pick up the pace.

Go check out the 1991 MusiCards blog. Broaden your musical and card horizons.

I have. And look what it got me.

Share
Facebook
Twitter
Pinterest
WhatsApp
Previous articleHue Jackson says he was not paid to lose, suggests that Brown’s situation was similar to that of Brian Flores
Next articleEubank Jr. vs. Williams – Live action results from Cardiff

OK, so the essential Baseball-Reference has yet another incredibly cool new feature called “Spans,” which allows you to take a look at a...
Read more
Load more