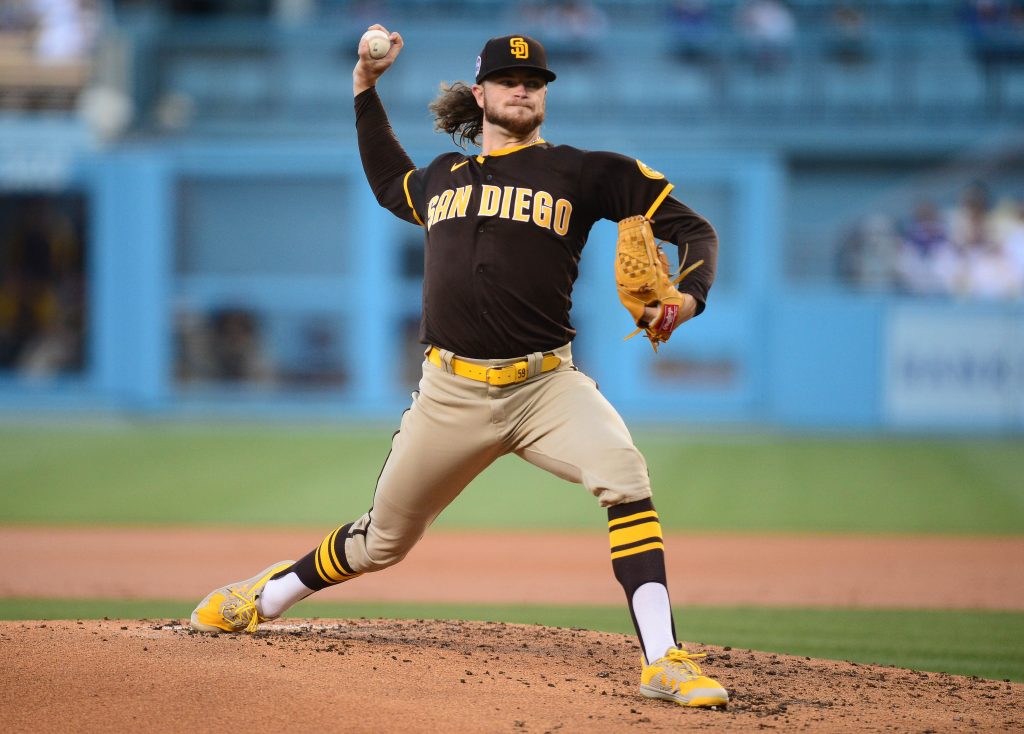 As fans look forward to the inevitable post-lockout transaction bonanza, those hoping to see their favorite teams add to the starting rotation are often focused on the Reds and Athletics as potential trade partners – and with good reason. Both Oakland (Sean Manaea, Chris Bassitt, Frankie Montas) and Cincinnati (Sonny Gray, Luis Castillo, Tyler Mahle) have three pitchers whom they could feasibly trade in order to cut payroll and add some young talent to the organization. The Marlins, too, are an oft-suggested trade partner for teams needing starting pitchers, even after already dealing Zach Thompson to the Pirates in December’s Jacob Stallings swap.

That said, while those three teams draw much of the focus, the asking prices there will be high. Teams will want alternatives, and the Padres are likely to receive a good bit of interest from those clubs. That’s not because San Diego is embarking on any sort of rebuilding effort, but rather because of the team’s plethora of rotation options and the ever-aggressive, never-rule-anything-out nature of president of baseball operations, AJ Preller.

Since taking the reins in San Diego, Preller has taken multiple offseasons or trade deadlines by storm with a flurry of activity. The “rock star GM” moniker bestowed upon him by Matt Kemp has become infamous, but Preller repeatedly lives up to the spirit of the nickname by demonstrating a flair for bold, dramatic strikes that reshape the organization.

The Padres staff struggled through injuries and some surprising ineffectiveness in 2021 but is still deep with arms who either have ample big league success or considerable upside. San Diego’s 2022 rotation currently projects to include Joe Musgrove, Yu Darvish, Blake Snell, Mike Clevinger and NPB returnee Nick Martinezwho agreed to a surprising four-year, $ 20MM contract prior to the lockout after a dominant showing in Japan.

Beyond that quintet, the Padres could have another full rotation’s worth of intriguing arms, albeit some of whom have had some recent struggles and / or injuries. Right-hander Dinelson Lamet has had the most recent success of the bunch, utterly dominating in the shortened 2020 season – 2.09 ERA 34.8% strikeout rate, 7.5% walk rate in 69 innings – before a UCL strain kept him from contributing in the postseason. He missed much of the 2021 season on the injured list and wasn’t as effective upon his return, but he’d be a front-of-the-rotation talent if his arm held up. The Padres may use him in relief this season, but there’s a big ceiling to dream on with Lamet, who’s controlled via arbitration through 2023.

Righty Chris Paddack has yet to regain the form he showed in a 2019 debut campaign that saw him in Rookie of the Year contention before falling to injury. He was diagnosed with a slight UCL tear late last season but is expected ready for the ’22 campaign. Paddack registered a pedestrian 4.95 ERA in 167 1/3 innings from 2020-21, but he’s still only 26 years old and boasts one of MLB’s lowest walk rates, in addition to a fastball that averages nearly 95 mph. He’s controlled through 2024.

Lefty Adrian Morejon, one of the prize signings from Preller’s international signing blitz during the Padres’ rebuild, will be returning from Tommy John surgery in 2022. His MLB experience is limited, but he’s still just 22 and ranked among the sport’s top 100 prospects for a half decade while rising through the system. He’s still under club control through 2025.

Another southpaw, Ryan Weathers, was the No. 7 overall draft pick back in 2018. Though he only recently turned 22, Weathers debuted in the Majors this past season and held his own early on before a rocky finish. Weathers carried a 2.73 ERA (albeit with shakier peripheral marks) through 62 2/3 innings before being clobbered over the final two months and closing out the season with a 5.32 earned run average. It was a rough finish, but Weathers is a 22-year-old former top pick and top prospect with a strong (albeit brief, thanks to the wiped-out 2020 season) minor league track record.

Twenty-five-year-old right-hander Reiss Knehr does not come with the prospect fanfare that some others in the system do, but he still rode a strong minor league effort to his Major League debut late in the season. A 20th-round pick in 2018, Knehr notched a 3.57 ERA with strong ground-ball rates through 75 2/3 innings between Double-A and Triple-A before getting the call to the big leagues. His 4.97 ERA and 20-to-20 K / BB ratio in the Majors won’t wow anyone, but it was only 29 innings for a 24-year-old rookie who’d never pitched above A-ball coming into the season.

Most enigmatically, southpaw MacKenzie Gore remains in the Padres’ system but has seen his stock plummet. A former No. 3 overall pick who entered the 2020 campaign ranked among the top 10 prospects in all of baseball, the 22-year-old Gore (23 next month) has yet to receive a call to the big leagues even as the Padres have repeatedly dealt with injuries and tapped into the depths of their system.

Gore got out to a dismal start with Triple-A El Paso in 2021, struggling enough for the Padres to push the reset button by taking him out of games and sending him to their spring facility to work on refining his mechanics. When he took the mound again late in the season, Gore looked stronger, posting a 2.67 ERA with a 43-to-16 K / BB ratio in 30 1/3 innings (six starts) across Rookie ball, Class-A Advanced and Double -A. He’s fallen completely off Baseball America’s Top 100 prospects list, but Gore is still young and teeming with raw talent. A few sharp months in Triple-A would have him right back on the cusp of the Majors.

That’s not even the full extent of San Diego’s near-MLB depth, either. Righty Pedro Avila may ultimately end up in the bullpen but has had some Double-A / Triple-A success and already gotten his feet wet in the Majors. Right-hander Adrian Martinez25, was selected to the 40-man roster prior to the lockout after dominating in Double-A and reaching Triple-A for the first time in 2021.

Thanks to a slew of win-now trades, the Padres’ farm system isn’t what it once was, but the wealth of pitching depth they’ve accumulated is nevertheless impressive. It also provides Preller and his lieutenants with fodder to make virtually any type of trade imaginable, and history has shown us that more often than not, Preller’s Padres will do just that. The nice part, however, is that there’s no pressure to move any one specific individual. Each of Paddack, Morejon, Weathers, Knehr, Gore, Avila and Martinez has minor league options remaining, so there’s no “on-the-bubble” pitcher who runs the risk of being exposed to waivers at the end of Spring Training.

With so many rotation options on hand, there’s any number of avenues the Padres could pursue following the transaction freeze. Holding onto the lot is, of course, a perfectly defensible route to chart, but even if the Padres aren’t actively shopping pitchers, other teams will come calling. Pitching-needy teams like the Nationals, Twins, Rangers, for instance, might like to get their hands on someone like Paddack or Weathers – a controllable arm without an immediate path to regular innings on the MLB roster in San Diego.

It’s also worth recalling the multiple points at which it was reported that the Padres had explored the possibility of getting out from under the remainder of Eric Hosmer‘s contract. Both the Rangers and the Cubs at least entertained the possibility of taking on Hosmer as part of a deal that would not give them a high-end prospect, and while there’s no guarantee those specific talks will be rekindled, it’s easy to dream up scenarios where Hosmer would be packed with some young pitching to help facilitate a deal. Similar scenarios with Wil Myers make some sense, too.

To be clear, the Padres do not need to move any of their rotation depth. Beyond the fact that all of the candidates listed here have options remaining (outside of the projected Opening Day quintet), San Diego will soon have a need for some new blood in the starting staff. Both Musgrove and Clevinger are free agents after the 2022 season. Snell and Darvish are signed through 2023 (the same point at which Lamet can first become a free agent). They’ll need some of these young arms to step up and solidify themselves as long-term options.

Still, the Padres are typically among the most aggressive and active clubs in baseball, and few teams have such a deep reserve of near-MLB rotation candidates. At the very least, other clubs throughout the league are going to be trying to pry some pitching loose from San Diego – particularly now that the free-agent market has been largely picked over. There’s a whole lot of focus on the available starters in Oakland and Cincinnati, but asking prices will be high there, and teams still in need of pitching are going to be mining the market for alternatives. San Diego has more of those than most.

It was an unusual game and an even more bizarre viewing experience on Sunday afternoon, but the Royals picked up just...
Read more
NHL