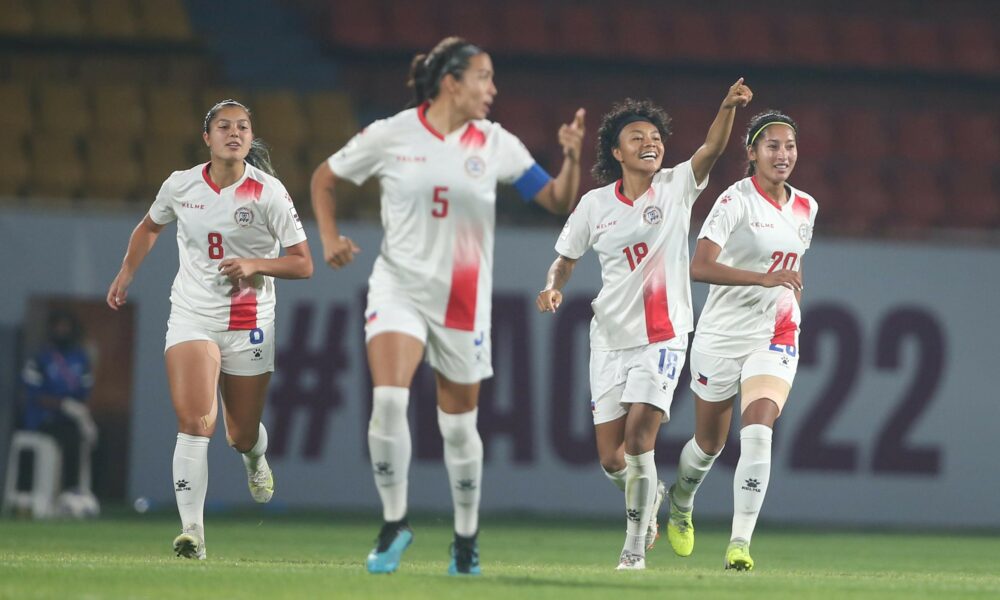 The Philippines joined rare company on Jan. 30. After playing Chinese Taipei to a 1-1 draw through 120 minutes of play, the Philippines prevailed 4-3 on penalty kicks to become the 37th nation ever to qualify for a Women’s World Cup.

A key talking point of the Philippines squad is their strong base of players from the United States, including 12 who are currently based there – some still in college – while their three European-based players (in Cyprus, Spain, and Sweden) and two abroad in Japan’s WE-League were all born in the US and played collegiately there. Only six of the 23-person roster at the AFC Women’s Asian Cup finals in India played for club teams in the Philippines. The program’s ability to find talented players of Filipino descent in the US was crucial to its qualification.

Goalkeeper Kiara Fontanilla, one of the Philippines’ US-based players, played last season at Division II Eastern Oregon University in La Grande. Playing for the Philippines was a lifelong goal for Fontanilla and allowed her to connect with her extended family in Asia. She previously played at Cal State-Fullerton and Division II Northwest Oklahoma State University. She had to fight her way onto the national team through an open tryout camp in Irvine, California, last November, which attracted over 100 players. She will be a volunteer coach back at Eastern Oregon later this year and is considering a professional career in soccer.

Another US-based player in the side is 28-year-old Katrina Guillou, who is in her second season with Pitea of ​​Sweden after two seasons in the country with second-division side Moron and two years with ONS in Finland; she played collegiately at the University of North Carolina-Wilmington.

The revelation of the tournament was forward Sarina Bolden, another US-born player from Northern California who scored 18 goals in her college career at Loyola-Marymount. Bolden is now in the WE-League in Japan with Elfen Saitama and had stints in Sweden and in Taiwan as well as with the San Francisco Nighthawks of the WPSL last summer. Bolden’s teammate, Quinley Quezada, is also based in Japan with JEF United Chiba in the WE-League. Quezada, too, was born in California and played at UC-Riverside.

There are two sisters on the team: forward Chandler McDaniel and starting goalkeeper Olivia Davies-McDaniel, were also raised in California and both went to college at the University of Wisconsin-Milwaukee.

This large reliance on their US-based players has not been just a short-term fix for a final’s tournament, as Greece did with wholesale importing of eight players mostly from college programs in the US to support their Olympic team for the Athens Games in 2004 Their goal to avoid embarrassment was largely met but, after the Olympics, the Greek federation did not bring the Americans in again for Women’s World Cup qualifying (some were even willing to pay their own way to Europe to participate). After mothballing the team for 14 months, the team lost all eight 2007 World Cup qualifiers, scoring only twice while allowing 28 goals.

In contrast, the Philippines has for some time built a rapidly improving team at the regional level by calling upon US-based talent; at the last Women’s Asian Cup in 2018 in Jordan (their first finals since 2003), they had 14 US-based players (plus one from Canada) who had all played collegiately in the US on their team that, as a third-place team in their group, made it to the fifth-place match for a final Women’s World Cup spot in France in 2019 but lost to South Korea, 5-0. The Philippines is committed to the development of women’s football and their strategy to integrate their large diaspora community has been successful on the field as well as gaining attention and a following at home.

The Philippines held a two-month pre-tournament training camp in Irvine, California, from November 2021 until they left for India last month. It was more efficient and productive because of COVID-19 and Visa issues than what they had done earlier in 2021 for the AFC qualification round, when they had to divide the squad into two training groups (US and Philippines) and communicate over Zoom. The team was further hampered by restrictions at home for face-to-face practices because of COVID-19.

“There were two different training camps with the locals staying here in Manila and trained via Zoom meeting,” said California-based midfielder Rocelle Mendano, who did not make the final squad for the tournament. “It’s really hard because we need match fitness, but fortunately, we were able to adjust right away when we arrived in Uzbekistan [for the qualifiers]. ”

Newly appointed head coach Alen Stajcic, the former Australian women’s national team head coach, has been with the Philippines women’s national team for all of three months, since November 2021. He was fired by the Australian Football Federation in January 2019 because of a vaguely worded wish to change the culture around the team with little other explanation; some were quite critical of the move, including all-time leading national-team scorer and Chelsea forward Sam Kerr. Stajcic took the AFF to court for damaging his coaching reputation and won a large settlement; he later coached Central Coast Mariners on the men’s side in the A-League.

It is quite ironic that Stajcic’s side made the semifinals and his former side Australia crashed out in the quarterfinals in India after a 1-0 defeat to South Korea (though Australia already qualified for the 2023 Women’s World Cup as co-host). The Matildas were desperate to win the Women’s Asian Cup for the first time since 2010, after losing to Japan in the finals of the last two editions.

Stajcic and his coaching team are out of contract now, but the Philippines Football Federation wants to sign him and his coaching staff to a long-term agreement through the 2023 Women’s World Cup finals.

“We have to talk to coach Alen because of course, he has brought the team to where it is now,” PFF president Nonong Araneta said. “Whatever it takes for us to get him [we will do]. ”

The Philippines defeated Thailand in their first match on Jan. 21. Chandler McDaniel scored the winner in the 81st minute, a huge surprise to Thailand – which had qualified for the 2015 and 2019 Women’s World Cup – particularly since the Philippines had not beaten Thailand in 12 previous attempts. In the second game, on Jan. 24, Stajcic’s former side Australia defeated the Philippines 4-0, with all the goals coming in the second half. In their last group match, the Philippines dispatched Indonesia 6-0 to finish second to the Matildas and move on to the eight-team knockout stage.

In the quarterfinals, the Philippines defeated Chinese Taipei 4-3 on penalties after a 1-1 tie, with goalkeeper Olivia McDaniel saving two spot kicks and scoring once during the tie-breaker session. In the semifinals, the Philippines fell to South Korea, 2-0. There is no third-fourth place match at this tournament, which has been played entirely behind closed doors due to COVID-19 (hosts India had to be removed from the tournament following their opening game, due to an outbreak).

Vietnam prevailed over Thailand and Chinese Taipei in the loser’s bracket which determined the fifth and final automatic World Cup berth out of Asia. Vietnam’s qualification was also their first for a Women’s World Cup. Thailand and Chinese Taipei will play in the 10-team global playoff in February 2023 to determine the final three World Cup participants. With the qualifications of the Philippines and Vietnam, nine different countries from the AFC have now qualified for a Women’s World Cup final event; they join Australia, China, Chinese Taipei, Japan, North Korea, South Korea and Thailand. China won the AFC Asian Women’s Cup for a record ninth time on Sunday, erasing a 2-0 deficit late to defeat South Korea, 3-2.

The Philippines squad will return home triumphant and can now start to plan for the 2023 Women’s World Cup finals in Australia and New Zealand in the summer of 2023. No doubt there will be strong US ties on the team, and many US supporters rooting for them on their journey to Australia-New Zealand.