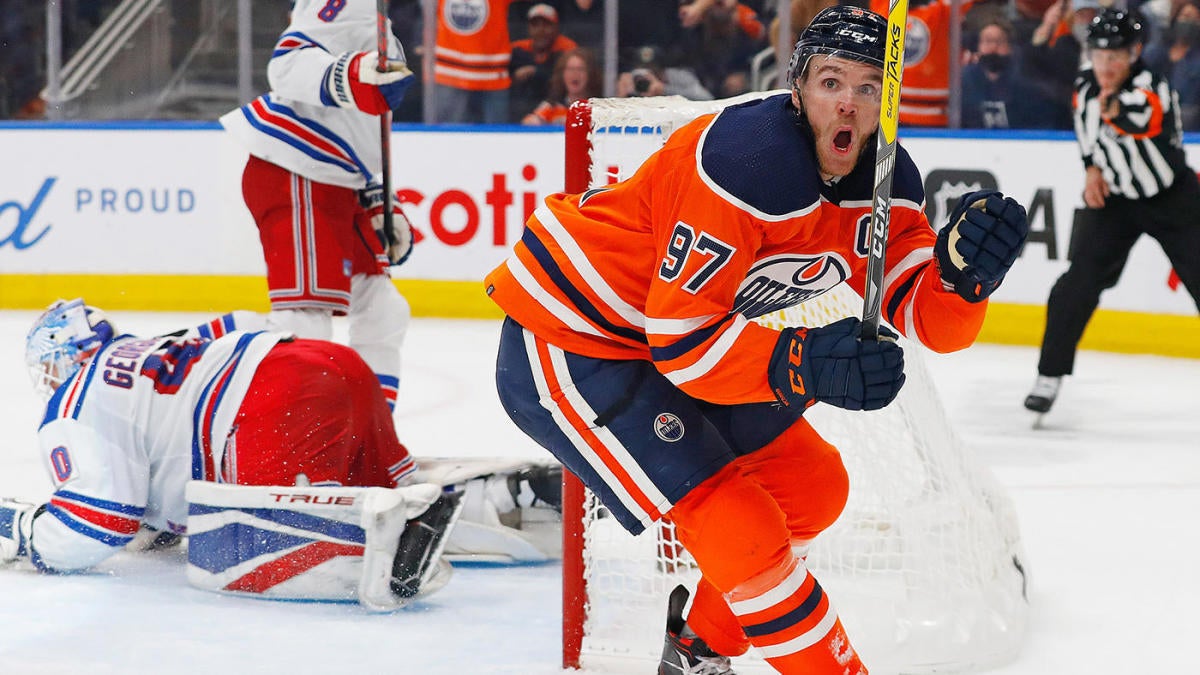 The league has seen everything from lacrosse-style goals to excellent displays of hand-eye coordination to puck-handling that will make your jaw drop.

With that in mind, I decided to put together a list of the top 10 goals from the opening half of the 2021-22 season.

It has to be extremely tough to score a goal when you’re falling to the ice. However, that’s exactly what Montreal Canadiens center Jake Evans did earlier this season. On Jan. 27 against the Anaheim Ducks, the Canadiens brought the puck into the offensive zone and Evans was able to shoot the puck off the boards. As he did so, Evans headed to the net and received a pass from teammate Rem Pitlick.

Evans was being tripped as he drove to the net, but still managed to score in a diving fashion. Nothing will ever top Alex Ovechkin’s falling down goal against the Arizona Coyotes back in the day, but Evans’ individual effort on this play was downright impressive.

This particular goal does not showcase any fancy puck-handling or dekes. But still, it absolutely had to be on this list. During an Oct. 24 game against the Minnesota Wild, Nashville Predators forward Tanner Jeannot found himself at the right place at the right time, but still had to improvise. The Predators had a two-on-one with Yakov Trenin carrying the puck into the offensive zone.

Trenin flipped a pass in the air towards Jeannot, but Jeannot did not have time to settle the puck down on the ice. Instead. Jeannot displayed unreal hand-eye coordination and batted the errant puck into the back of the net. Jeannot had to have the blade of his stick in the exact right place and he absolutely did.

No. 8: Mitch Marner spins and scores

When you think of Toronto Maple Leafs goal scorers that could make this list, your mind probably immediately goes to Auston Matthews, John Tavaresor even William Nylander. However, center Mitch Marner is the one that definitely has a place on this list.

During a game between the Vegas Golden Knights and Maple Leafs on Nov. 2, the puck was loose in the corner of the Golden Knights zone and Tavares did an incredible job to fish it out quickly. Tavares then flipped it in front where Marner was waiting and produced a highlight reel goal. Marner ended up being able to corral the puck, complete a ridiculous spin-o-rama, and backhand the puck past goaltender Robin Lehner. While the degree of difficulty was kind of insane, Marner still managed to make the goal look very easy.

Despite being considered a veteran at 30, St. Louis Blues winger Vladimir Tarasenko has proved that he’s still capable of making jaws drop. Back on Oct. 25, the Blues star received a cross-ice pass near the blue line and weaved his way through the Los Angeles Kings defense. Tarasenko ended up juking his way around defenseman Mikey Andersonstick-handling a few times and lifted the puck high past veteran goaltender Jonathan Quick.

Tarasenko is often known for his cannon of a shot, but his puck-handling skills were on full display in order to make this goal happen.

No. 6: Brian Boyle goes behind back, between legs

There’s a ton of star power on this list, but there’s also a place for grizzled veteran as well. At 37, Brian Boyle was signed to a tryout contract by the Pittsburgh Penguins prior to the 2021-22 season getting underway. The Penguins ended up liking what they saw and signed Boyle for the entire season.

When you think of a 37-year-old forward like Boyle, you may not think he’s prone to anything too flashy on the ice. However, Boyle proved everyone wrong last month with a spectacular goal. On Jan. 25, Boyle found himself all alone in front of the Arizona Coyotes net and made the most of that opportunity. Teammate Zach Aston-Reese flipped the puck in front of the Coyotes net to Boyle, who was able to gain control of the puck and put it between his legs in order to score an improbable goal. Boyle has put together a strong career, but that easily has to be one of the prettiest goals he’s ever had.

Between-the-legs goals have seemed to be a theme throughout the 2021-22 season. However, Calgary Flames winger Matthew Tkachuk definitely provided the most insane one. On Nov. 7, the Flames already had a commanding 5-0 lead over the New York Rangers. Late in the third period, Johnny Gaudreau threw the puck in front and Tkachuk decided to add some flair to his shot attempt.

Tkachuk corralled the puck, went between his legs, and flipped it past Igor Shesterkin – despite being completely turned around on the play.

It was downright impressive for Tkachuk to even get control of the puck, but even more so that he was able to go between his legs and put it in the back of the net.

No. 4: Jack Hughes opens the season in style

This is one goal that I feel like many people forget about. Maybe that’s because it happened during the Devils‘season opener. On Oct. 15, Hughes, who signed a massive eight-year contract extension with the team earlier this season, found himself in the offensive zone with the game on his stick.

Hughes made his way towards the front of the net and defenders were scrambling to try and stop him.

Instead, Hughes ended up completely putting on the brakes and making Blackhawks goaltender Kevin Lankinen look absolutely foolish. After Hughes stopped on the dime, he was able to tuck the puck home on the backhand with Lankinen being out of position. Hughes’ goal was one of the most insane individual efforts that the NHL has seen throughout the season. It was just so impressive the way that Hughes was able to completely school Lankinen.

No. 3: Sonny Milano bats in insane pass from Trevor Zegras

Goaltenders are always vulnerable when it comes to opposing players handling the puck behind the net. For Buffalo Sabers goaltender Ukko-Pekka Luukkonen earlier this season, he simply had no chance. On Dec. 7, Anaheim Ducks center Trevor Zegras had the puck all alone behind the Sabers net and also had a little trick up his sleeve.

Zegras decided to put together his own version of the “Michigan goal.” For those who are unfamiliar with the play, back in 1996, the University of Michigan’s Mike Legg scooped the puck up with the blade of his stick and tucked it into the net for an insane goal that topped every imaginable list.

On this particular occasion, Zegras scooped the puck up with the blade of his stick, but added a different degree of difficulty. Zegras flipped the puck over the net and in front to teammate Sonny Milano. Milano then batted the puck past Luukkonen for the insane goal. It’s hard to display better hand-eye coordination than that.

No. 2: Cale Makar stops on a dime, produces game-winning goal

There was no way that this goal could not be near the top of the list. Colorado Avalanche defenseman Cale Makar has blossomed into one of the most offensively-gifted defensemen that the league has seen in quite some time. Just last month, Makar turned into one of the most unreal efforts that you will ever see on a sheet of ice.

The Chicago Blackhawks and Avalanche were tied 3-3 and were in the midst of overtime period back on Jan. 4. Makar found himself handling the pick behind the net before appearing to skate back out towards the blue line. However, Makar completely stopped, spun away from Blackhawks forward Kirby Dach and made a direct line for the net. The Avalanche star was able to then fool Marc-Andre Fleury and lift a backhanded shot into the net for the game-winning goal.

It was honestly unreal what Makar did on this play without any assistance. He displayed his tremendous puck-handling skills, along with his goal-scoring acumen around the net. While it is early in his career, Makar certainly has all the makings of being an all-time talent. Goals like this are a reason why.

There’s been some insane goals throughout the 2021-22 season, but there’s no way I could put anything else in the top spot. Edmonton Oilers star Connor McDavid has been a human highlight reel for some time now, but he’s been on a completely different level this season.

On Nov. 5, the Oilers were trailing the Rangers 5-4 late in the third period and had just clanged one off the crossbar. In fact, the puck squirted all the way out of the offensive zone, where McDavid retrieved it. McDavid had to wait for his teammates to make their way out of the zone before bringing the puck back in.

So, McDavid took matter into his own hands and ended up weaving his way through four Rangers defenders to slide a miraculous backhand shot past Rangers goaltender Alexandar Georgiev.

Sure, everyone realizes that McDavid is one of the best players in the world, but this goal was absolutely jaw-dropping. It’s the type of goal you score in a video game – but that’s become the norm for McDavid.

Data scientists have to make decisions about which data to include in data...
Read more
Travel

Visiting Vegas this month? These are things to do in Vegas in June.Summer is here, and it's here to stay, which means...
Read more
NBA