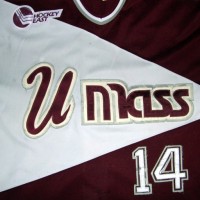 Now that Coach Carvel and his staff have indicated that they’s done assembling their first recruiting class and we know about the current players who will not be returning next year, it’s time to take a fresh look at where the program is from a recruiting standpoint. Recruiting is a fluid situation even in normal situations, so it’s been a challenge to try to keep up with all the new names that have recently committed while following which previous recruits are still committed to the school. I believe all my information is up to date. So first up, let’s take a look at the future Minutemen due in Amherst this fall.

Shane Bear – D – Brooks Bandits (AJHL) – 2016 (NLI Signed)
44 GP / 11 G / 31 A / 42 Pts / 56 PIM
Bear was a key to the Bandits’ championship season. He had a strong regular season where he was a finalist for AJHL Defenseman of the Year and was considered one of the top defensive blueliners in the league. Still, his near point a game pace shows that he can move the puck well as well. Bear was on the Canada West team at the World Junior A Championships this past year (Kurt Keats and Callum Fryer played in the WJAC last year). He seems small (5’10 ”) but rugged. I was happy to hear that he remained committed to this fall in spite of the coaching change. The school recently made his commitment official:

Niko Hildenbrand – RW – Fargo Force (USHL) – 2016
46 GP / 10 G / 12 A / 21 pts / 46 PIM / +2
Hildenbrand had 13 points in 24 games with Fargo after being traded from Waterloo midseason. Like Bear, Hildenbrand originally committed to UMass when John Micheletto was coach and has remained in UMass’ plans. It’s likely that the current staff has seem to him a number of times as Hildenbrand will be one of three Fargo Force players in this year’s class.

Jeszka was the first commit of the Carvel era at UMass. His 48 points led the Blizzard in the regular season and was tied for 30th in the NAHL. For that he was named the team’s MVP. Jeszka is a two-way center with decent size at 6’1 ”, 195lbs. His commitment was also recently announced by UMass:

McLaughlin was originally a St Lawrence recruit but changed his commitment after the coaching change. McLaughlin is said to be a defensive oriented defensemen who is also a strong skater.

24-22-1 / .917 Save% / 2.29 GAA / 5 Shutouts
Like McLaughlin Wischow played for Fargo this past season and was also originally slated to go to Saint Lawrence. Wischow was one of the better goaltenders in the USHL this season. He was 4th in the league in goals against average, 8th in save percentage, and led the league with Cedar Rapids’ Benjamin Blacker in shutouts. At one point in the season he had a 151 minute shutout streak. He was also tied for the lead league in games played. He was a top goaltender in the NAHL before heading to Fargo. Here’s the school’s release on Wischow:

Suter was second on Sioux Falls in points this season and was tied for first in assists. His 40 points put him tied for 43rd in the USHL in total scoring. He was originally committed to playing at Air Force but had second thoughts about joining the academy. In 2013 Over The Boards described him as a shoot-first forward.

Lazarus was third on his team in points. He scored on nearly 1 / 5th of his shots, with his 16 goals coming on just 84 shots on goal. Lazarus is known as a patient two-way forward who excels on the power play.

Boeing was a key part of Michigan Tech’s recruiting class last fall but things did not work out in Houghton and he left to return to Dubuque where he had previously been an assistant captain. In his last full season with Dubuque in 2014-15 he had 28 goals and 20 assists in 60 games, finishing 9th in the league in scoring. He’ll be eligible to play for the second semester. It’s currently unknown if he’ll be on campus for the first semester or in the USHL.

Cale Makar– D – Brooks Bandits (BCHL) – 2017 (NLI Signed)
54 GP / 10 G / 45 A / 55 Pts / 28 PIM
Makar had 3 goals and 11 assists in the 13 playoff games as the Bandits won the AJHL championship. In the regular season he accumulated the second most points for a defenseman, despite it being his first year in the league. He was the co-winner of the league’s Rookie of the Year award. He was named to the division’s All League and All Rookie teams. For his spectacular season he was named Rookie of the Year by the CJHL which covers all of Canada’s Junior A hockey leagues. He was also named the Top Scorer, Top Defencemen, and MVP of the RBC Cup which pits the different Junior A champions from across the country against each other. Makar is currently projected to be an NHL draft pick in 2017.

Matt Murray – G – Spruce Grove Saints (AJHL) – 2017
23-4-0 / .910 save pct / 2.60 GAA / 3 shutouts
Murray lost to Bear, Nachtigall, and Makar in the AJHL finals. He finished the playoffs 6-4-0 with one shutout, a save percentage of .941, and a GAA of 1.90. He ended the regular season 5th in wins and goals against average and sixth in save percentage. He was presented with his Top Goaltender trophy (won last year by current Minuteman Nic Renyard) and Top Goaltender Team award for his performance. He was also named CJHL goaltender of the year (also won by Renyard last year).

Colin Felix – D – St George’s (NE-Prep) – 2018
25 GP / 11 G / 20 A / 31 Pts
Felix ended the regular season with 31 points in 25 games, which was tops for defensemen in the Eberhardt division and 6th among all prep defensemen. He was named ISL 1st team. They ended up losing to St Mark’s in the prep playoff opener. He recently attended the Green Bay Gamblers (USHL) training camp.

So that’s where we stand in terms of recruiting currently. Things can change quickly though so I’ll do my best to keep up.

The Projected Future Roster page has been updated with the changes to date.

Jillian Jakuba in the hockey office put together this graphic highlighting UMass’ accomplishments in the pros this year:

Texas Motor Speedway is planning to roll out the red carpet for the stars of the sport competing in Sunday's NASCAR All-Star Race...
Read more
NFL