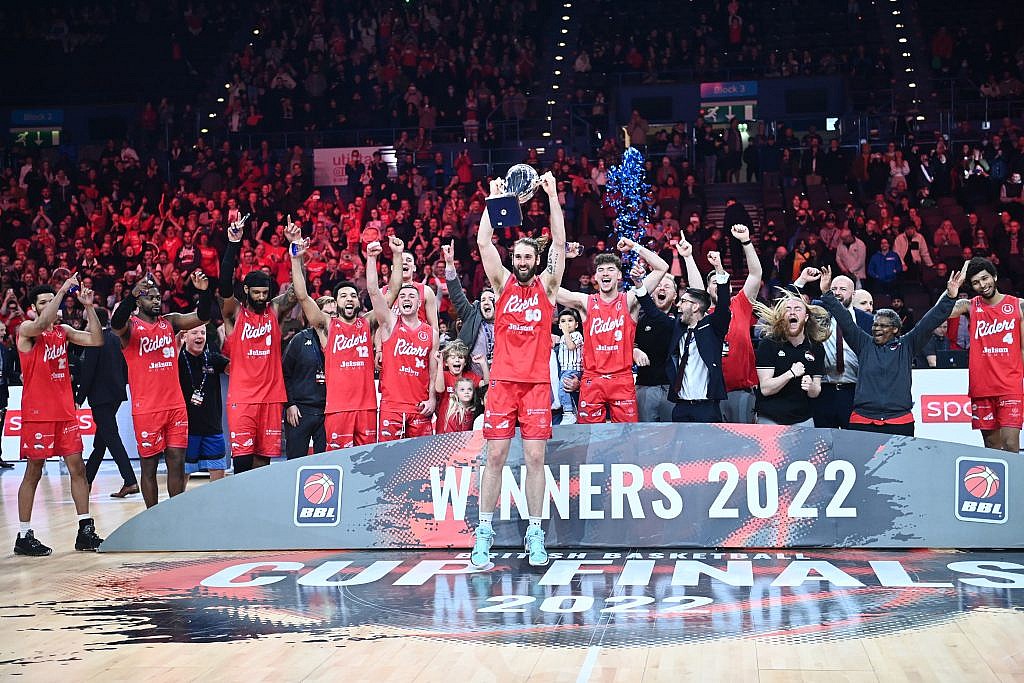 Leicester Riders lifted the BBL Cup after beating Manchester Giants 83-69 in the final at Birmingham’s Utilita Arena. The Riders capped a memorable afternoon in front of a record crowd for a BBL Cup final as a capacity crowd of Basketball fanatics turned out to be an incredible matchwhich was also enjoyed by many more watching live on Sky Sports.

Geno Crandall was named MVP after he dominated the showpiece event at both ends of the court. The Riders Point Guard scored 26 points, five assists and five rebounds in an outstanding individual performance. Crandall was at his sensational best, playing a starring role in an excellent team performance from the BBL Championship front runners.

Both sides put on a great show in the opening quarter in front of an atmospheric crowd in Birmingham. Giants took an early lead and found themselves marginally ahead after a closely fought opening ten minutes.

If the first quarter belonged to the Giants, the second certainly belonged to the Riders who stamped their authority on the match. Their attacking power shined through as they turned the score around to lead by 17 at the half time break. Geno Crandall was quickly becoming the star of the show, scoring an impressive 14 points in the first half. Tyrik Armstrong played an influential role in the Giants’ attempts to stage a comeback, contributing with 18 points and four assists for his team.

The Giants came right back into the contest in the third quarter, scoring twenty-three points to reduce the deficit to just nine points as the game headed into a nail biting fourth quarter. Despite the Giants throwing everything at it in the final 10 minutes, it was the Riders who reigned supreme in Birmingham. Rob Paternostro’s side they showed their quality throughout the final to ensure the BBL Cup returned to the East Midlands for the third time in the franchise’s history.

Winning Head Coach, Rob Paternostro was delighted with his team’s performance on the big stage. He said:

“I thought from the second quarter our defense locked them up, even if you do not shoot particularly well you can be strong defensively and I thought those guys did a great job. The second quarter we only gave up eight points and I think that’s what got us in front.

“From the first day got in we looked round and thought we’ve got some talent, some real professionals in our camp. Our fans do a great job and I thought there was great intensity and atmosphere inside the arena today. It’s a welcome sight for everybody to see fans back with us today. ”

“I thought it was a credit to the work we put in during the week. As players you feed off the crowd, I was playing to our crowd and getting them into it myself and our guys feed off from that.

“We are a team that is extremely consistent and over the course of the 40 minutes we have the ability to put teams away. It was great to play out there in front of so many fans, that’s what it’s all about, I think it’s been an awesome event and weekend for British Basketball. ”

On what was a capacity crowd of close to 10,000 spectators at the Utilita Arena, Birmingham, BBL Chief Operating Office, Andy Webb said:

“It was a terrific atmosphere inside the arena today for the top two teams in the BBL and both sides put on a really entertaining spectacle. I’d like to congratulate Leicester Riders on lifting the BBL Cup this afternoon and we can not wait to see what the rest of the season brings for all of our clubs. This is an exciting time for basketball in this country, with the recent investment deal and a record crowd today, it highlights the progress the league is making. British basketball has a bright future and today was just the start of that journey, it really does feel like a landmark moment for the sport and something we want to continue to capitalize on ”.