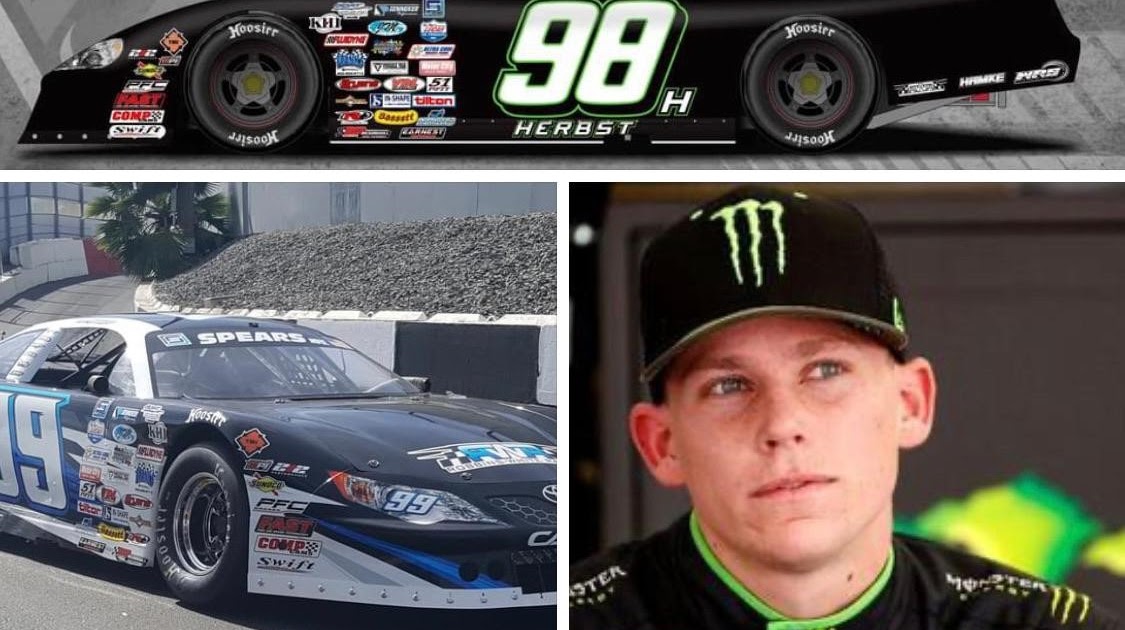 Stewart-Haas Racing NASCAR Xfinity driver Riley Herbst will make the trek from Charlotte, NC to Irwindale Speedway (CA) for the $ 25,000-to-win “All-Star Showdown 200” on February 5th. The Las Vegas, NV native will return to a track at which he spent several seasons cutting his teeth in Late Models and Super Trucks. He will also reunite with an old friend from his early days of racing in Southern California, on a busman’s holiday for the 22-year-old NASCAR star.

“Honestly, I love what I do driving in the NASCAR Xfinity Series, but we are about to head to Daytona, and it is an absolute grind for 33 weeks, with a few off weekends,” Herbst explained. “My good buddy RJ (Johnson) texted me and asked me if I wanted to come out and run the Super Late Model. I have not been in a Super Late Model in almost six years, so it will be the first time for me in quite some time in a Super. But more than anything, it’s about coming out and having fun. Just hanging out at the racetrack and not having the high intensity stress, like you do in a week in week out basis in the Xfinity Series. ”

The two-time winner in the ARCA Menards National Series will be behind the wheel of a Hamke Racecar Super Late Model out of the Earl Robbins / Linny White Racing stables. It is a car that has seen success with White behind the wheel in both SRL and open Super Late Model competition. White finished as the championship runner-up in the series in 2019 with this car, winning two races that season. He joined Preston Peltier and Jeremy Doss as the only competitors to defeat Derek Thorn heads up that season. He finished the 2020 season fourth in the standings, after missing an event, but added another win to the car’s resume, beating Thorn at Irwindale. The team also fields cars for 2021 All American Speedway Late Model champion John Moore, with 2021 seeing the Granite Bay, CA driver with a career high three top-five finishes in SRL competition.

RJ Johnson will be the Crew Chief for this effort and has extensive experience in the SPEARS SRL Southwest Tour Series. He has been a fixture behind the wrenches in the SRL having performed the Crew Chief duties for drivers such as 2017 Rookie-of-the-Year Ricky Schlick and 2019 Rookie-of-the-Year Tyler Fabozzi as well as Linny White. He has also been behind the wheel himself, earning championships in the Super Late Models, Late Models and Super Trucks at Irwindale Speedway. Johnson was the nexus of the deal to bring Herbst out to California and race with the Earl Robbins / Linny White Racing Team.

“Riley and I met when he raced Super Trucks and Late Models out here at Irwindale many years back,” Johnson recalled. “We tried to stay in touch whenever we could. About 2-1 / 2 years ago, while I was in North Carolina, we ran into each other and that’s when our friendship started to expand. Since then, all we have talked about is trying to do some races together, but with his busy schedule and my racing commitments, it’s never panned out. When the opportunity came up, he was the first one I reached out to! So, to say I was excited when he said, “he’s in”, would be an understatement! Not only because of his talent behind the wheel, giving us a great shot at running upfront, but also to finally have the opportunity to work together. It’s going to be a blast. ”

Herbst has finished in the top dozen in championship standings over the last couple of seasons in the NASCAR Xfinity Series. He had a career best finish of second at both Auto Club Speedway (CA) and Kentucky Speedway (CA) in 2020. He has nine top-five’s and 30 top-10 finishes over those last two seasons, nearly reaching the 50% mark in the later stat. He scored his first career pole in 2021, when he turned the trick at Charlotte Motor Speedway (NC) in the 2021 “Alsco Uniforms 300” on Coca Cola 600 weekend. He comes into this event with consecutive top-10’s including a fourth-place finish at Phoenix Raceway (AZ).

Prior to his Xfinity experience, Herbst ran for Rookie-of-the-Year in the ARCA Menards Pro Series West in 2016, finishing seventh in the overall standings. He participated in the ARCA Menards National Tour in 2017 and 2018, finishing top-five both seasons. 2019 found Herbst running partial schedules in the ARCA Menards Series, NASCAR Craftsman Truck Series and NASCAR Xfinity Series. But despite his busy racing schedule, it has been since 2016 since he has competed in a Super Late Model. With his experience at Irwindale, that circumstance is what Herbst feels will be his biggest test, to his participation in the rich event.

“The biggest challenge for me will just be getting back to being used to the Super Late Model”, Herbst acknowledged. “Irwindale is one of my favorite racetracks. The Super will be challenging, but we’re gonna have quite a few practice sessions. Hopefully we can knock the rust off and be competitive. ”

Herbst will certainly have the opportunity to be competitive with a race winning car, race winning organization and an experienced crew with Johnson and White heading the effort. The crew will be top notch as they have been with Johnson since his days Ricky Schlick. Johnson is excited for the upcoming race weekend with a rare weekend off from his regular SRL duties.

“I will have 99% of my track crew from the Ricky Schlick days, plus adding on the experience of having Linny White prepping and setting up the Hamke Racecar, and lastly Earl Robbins giving us top notch equipment to go out and contend for a win ”, Johnson described. “For me it’s my whole racing family from east to west coming together for one weekend and one common goal. I really can not wait to get to work! ”

Honestly, I do not think I’ve raced against Derek (Thorn) before, but I have great respect for him and I always pull for him in the big “Super” races, just because he is from the West Coast. I always love to see West Coasters race on the East Coast in the big races. I’m a big Derek Thorn fan. I’m excited just to come out and have fun before the season starts. ”

The normal # 99 of the Earl Robbins / Linny White Super Late Model will be renumbered to the # 98, which is more familiar to Herbst. The car will have a similar look to his Stewart-Haas Motorsports ride, with hopes of another top-five or his first SRL win. Herbst is thankful for the opportunity he has to return to Southern California and get back behind the wheel of a Super Late Model.

“It’s gonna be a black racecar, but I want to thank RJ and Ford Performance as well as long-time sponsor Monster Energy Drink,” Herbst declared. “It’s a low-key deal, just coming out to have some fun before the season starts.”

The “All-Star Showdown 200” will take place on February 5th at Irwindale Speedway. It will kick off the 22nd season for the SPEARS SRL Southwest Tour and the second for the SPEARS Pro Late Models presented by Sigma Performance Services. The SPEARS Modified Series will take part in their second event of the season, after Jaron Giannini won the opener at Havasu 95 Speedway. The Super Late Models will race for $ 25,000-to-win. The Pro Late Models will compete for $ 10,000-to-win and the SPEARS Modified Series will shoot for $ 5,000.

Tessa Blanchard has severed ties with the all the companies she used to work with and there's seemingly no coming back. Tessa...
Read more
BOXING

NFL players attending NBA, NHL, MLB and other games around the country