Home Sports BOXING Ryan Garcia: Tank Davis does not want to be great, I would...
SportsBOXING

Ryan Garcia: Tank Davis does not want to be great, I would love to fight Kambosos 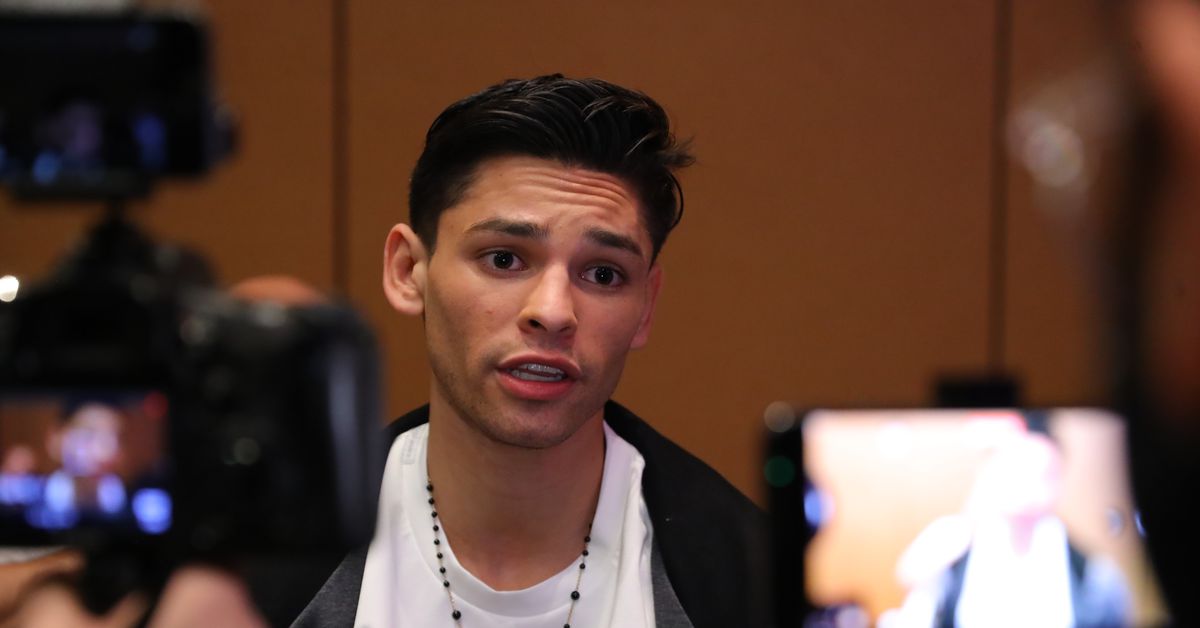 Ryan Garcia has not been in the ring since his Jan. 2021 win over Luke Campbell, but the lightweight star is set to make his return on April 9, when he faces Emmanuel Tagoe in a DAZN main event from San Antonio.

Garcia (21-0, 18 KO) also recently parted ways with trainer Eddy Reynoso, and will be working with Joe Goossen for his next bout. That’s among many questions fans and observers will have going into that fight, and going forward in the young standout’s career.

In a conversation with Dan Canobbio for Inside Boxing Live, the 23-year-old Garcia had a lot to say about potential rivals Tank Davis, George Kambosos Jr, and Devin Haney, plus more. Here are some quotes from the interview:

On what happened with the Manny Pacquiao negotiations in 2021

“(Pacquiao) was a strong learning lesson. I take full responsibility, because I should not have posted a fight poster when it was not done yet. I just wanted to see how fans would react. Obviously, it got over a million likes. The thing is, though, that fight was actually, really trying to get made. I FaceTimed Manny Pacquiao, he wanted to do it, everyone wanted to do it. It fell through because the guy that wanted to fund it was just a lunatic. He was literally, I think he’s losing it a little bit. I’m not gonna say names, but he just had a lot of crazy ideas, he was going off the rails. Whatever he was saying, it was a lie, and it was not going to get funded the way I thought it was. But I take full responsibility, I should not have posted a fight poster. I was just excited. ”

I was in negotiations to fight Tank (Davis), but at the time when I got offered that, I’m, like, ‘Oh my gosh, this is amazing! I look up to this guy, I like how he fights, I think I know I can beat him. I see shots I can land on Manny Pacquiao, like, I should do this! This is crazy, if I beat him, this will be a legendary moment! ‘ Like, I was so excited. ”

On what happened with Tank Davis negotiations after that

“(The Pacquiao fight) was way more money than Tank, and it was so exciting. I really wanted it to happen. It did not happen, and when I tried to go back to the Tank fight, Tank said, ‘Fuck you,’ and I’m, like, ‘Alright, I get it, I wasted some time on you guys,’ but they were not trying to make a real deal, to be honest. They were just testing out the waters, seeing where we’re at, seeing if they could get more on me. They’re supposedly a bigger star, when they’re not.

“But I do not want to deal with those problems. I know that I bring – he could try to make a pay-per-view with somebody else, and I guarantee you it is not gonna do well. The only pay-per-view that’s gonna do well is him and myself. End of the day, you have to come up with a great deal that works for both of us.

“To make that fight, I would definitely on some stuff suck it up and be, like, ‘Shit, OK, alright, we’ll give you that.’ I will not be like Maidana not using the gloves I want. He will not make me do that. … That type of stuff, no, he will not get on me. ”

“50/50, even though I should probably deserve a little bit more, but I will definitely take 50/50. That’s probably the lowest I’ll take. ”

On not being surprised at Tank not being in Kambosos negotiations

“He’s just not gonna do it, nobody thinks he’s gonna do it. He almost lost to Pitbull Cruz. Mayweather will not – and it’s not even (Floyd) Mayweather, it’s just their format in how they want to move Tank. They want to make sure he’s a star no matter what. Low risk, Tank wins by knockout, it builds his stardom – which it does, I totally understand it, do your thing.

“But that’s why he’s not mentioned in it. He’s not really wanting to be great, he just wants to make all the money he can make. And I’m not mad at it. ”

On understanding Tank’s path but how he differs

“I want to make a lot of money, as well, but I do want to knock people out that people do not think I’ll knock out like Kambosos and Haney, guys like that, Lomachenko. I would fight those guys because I know I can beat them. I know in my heart that when I step in the ring I’m always – I do not know, I’ll find something special to do. You’ll just see, like, I’ll find the shot I need to do, I’ll do what I have to do. I put pressure on Luke Campbell, I’m not even a pressure fighter, but I learned how to do it against Campbell because I knew I had to do that.

“I know when I step in the ring against these guys, I’m gonna beat the guys. I’m gonna beat Kambosos, I will knock Devin Haney out, all respect. It’s just a matter of time before I do it. Now Tank, he’ll fight me, wanna know why? Because it’s gonna make him a lot of money and he thinks he can beat me. ”

On Devin Haney not being a draw

“I could probably guarantee DAZN was super sad I did not fight JoJo Diaz, because that would have sold out anywhere. And I guarantee their subscription base for that fight with Campbell went through the roof. Just our highlights had over 18 million views. Do you understand how much that is? Yes, there’s a reason they want me to fight Kambosos, because of the subscriptions that come in when I fight is probably 10 times more than Haney. That’s kind of overstating it, not 10 times more, but probably triple. ”

“If you’re not willing to entertain the fans like that, nobody’s going to want to watch you, I promise you that. I fell asleep when Devin Haney was fighting JoJo Diaz! That was so boring. You’re tagging him up, but why did not you continue to hit him? You hit him, hit him, and then you move away. You act like he has power, like JoJo is this monster. Just get him out of there already! I do not think they’ve got that blood. I’m bloodthirsty in the ring. I want to destroy you with every shot I can possibly hit you with. ”

“Tank puts it all in the ring to get the knockout and to entertain the fans, and I respect it! I’m a fan of Gervonta Davis, I like how he fights, I like what he brings to the table. I want him to fight him because I know it’ll be a special moment. I know it will be. That’s what Devin does not get. ”

“Kambosos keeps barking on the internet, ‘That’s not true, I’m the boss, blah blah blah.’ Dude, why do you need to lie? Just do not say anything! We know the truth, it’s out there. Just stay quiet and see how it plays out. Who cares what people are saying on the internet? The fight either is going to happen or not. I honestly would love to fight Kambosos, but I personally do not even need to go that route. I can fight whoever I want and do pretty good. Do not lie, just let things play out how they’re gonna pay out. If you wanna go my route, let’s do it. If not, go to Lomachenko or fight Devin Haney, you could do that route. ”

“And I like Kambosos! I think he’s a cool dude. I gave him props, I told him a long time ago, ‘Hey, man, I think you can beat Teofimo, good luck, do your thing.’ He said, ‘Yeah, man, if I beat him, you can have the first crack at it, I promise you.’ ”

“It’s funny when you get a little power, you’re power-hungry now. When I get the belts, you’re gonna see how I move. I’m gonna move in the shadows. When you’re really in power, you do not talk. I do not have all the belts, so I can talk all the shit I want. ”