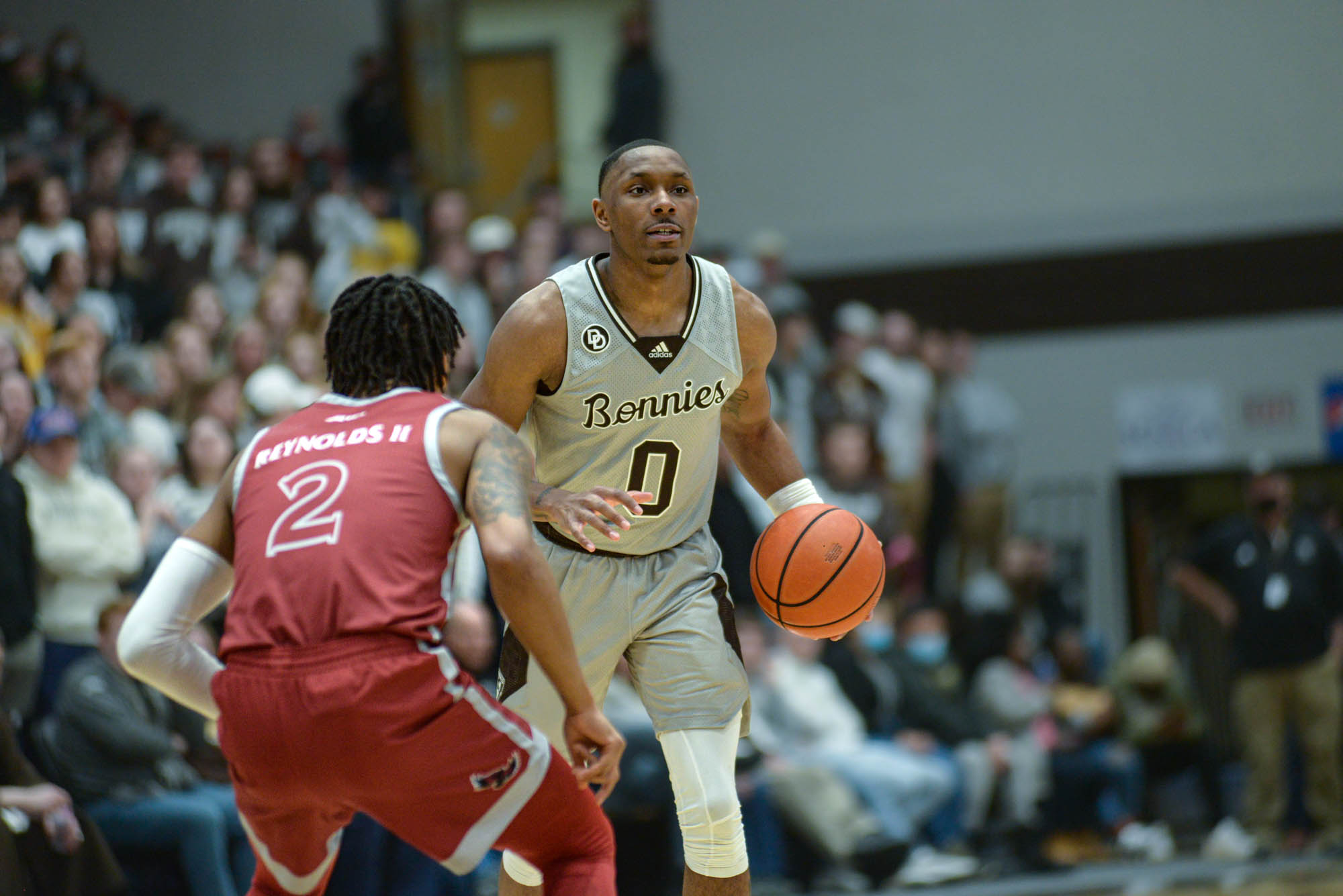 Allegany, NY – The St. Bonaventure Bonnies (SBU) coasted against the Saint Joseph’s Hawks (SJU), earning a 80-69 home victory. SBU was led by senior guard Jaren Holmes who finished the game with 20 points, 2 rebounds, and 3 assists. In addition to Holmes’ contribution, senior guard Jalen Adaway also contributed to the win with 22 points, and 5 rebounds.

For St. Bonaventure the key factor in this win was their willingness to attack the rim. The Bonnies shot only seven attempts from beyond three, with only two of them finding the bottom of the basket. Compare that to Saint Joe’s, who shot 34 attempts, and scored on only ten of them. While both teams clearly struggled shooting from outside, SBU made the adjustment to reduce outside shots and committed to scoring inside.

This adjustment resulted in the Bonnies only taking three three-point shots in the second half. However, St. Bonaventure’s strategy was geared towards the team’s strength since SBU has shot only 32% from beyond three this season. Instead of settling for threes against an inferior team, they put their heads down and attacked the rim with incredible efficiency.

Bonaventure Played to their Strength

St. Bonaventure finished the game shooting 51% from the field and 55% from two. One stat that reflected Bonnie’s domination over Saint Joe’s was “time with lead”. Saint Joe’s last lead today came at the 13:00 mark of the first half. After that, St. Bonaventure was able to dominate the game, never relinquishing the lead to the Hawks. St. Bonaventure held the lead for an astounding 79% of the game.

Another interesting stat worth mentioning was bench points. With the continuation of both Kacper Klazcek and Jack Forrest sitting out for Saint Joe’s, the Hawks have been forced to utilize a shallow rotation for the last few games. Saint Bonaventure on the other hand is well known for their tendency to rely heavily on their starting rotation. Because of this, the respective bench points for SJU was 5, and for SBU it was 4.

In the end, St. Bonaventure dominated the Hawks with unrelenting pressure in the paint. They out-rebounded Saint Joe’s, controlled the pace of play with a 19-4 discrepancy in fast break points, and stuck to their game plan of inside scoring. All of this put together resulted in an easy home victory.

Saint Joe’s Woes and the Bonnies

For Saint Joe’s this loss is unsurprising. Heading into this game the St. Bonaventure Bonnies were heavy at-home favorites against this shaky Hawks team. Saint Joe’s did their best to stay in contention with the returning A-10 champions. They fought hard in the first half and even closed a ten point gap to get within two at halftime. However, after trading baskets to start the second half, the dam broke. St. Bonaventure went on a huge scoring run, resulting in a 66-50 lead. After that, the game was over, even as Saint Joe’s pushed hard to close the gap in the final two minutes of play.

Saint Joe’s Erik Reynolds II had a solid effort tonight as the freshman guard finished with 21 points on 8-16 shooting. However, Reynolds did go 3-10 from beyond the three point line. Taylor Funk and Jordan Hall had relatively quiet games. Hall finished with 8 points and 6 assists, but also had 5 turnovers. Funk finished with 10 points, but had no points in the first half, and only had two rebounds for the entire game.

Unfortunately for Saint Joe’s this is not an unfamiliar result. The Hawks have struggled the past few years against St. Bonaventure, accumulating a dismal 4-17 record against the Bonnies since 2011. In addition, this was also Saint Joe’s seventh loss in a row to SBU.

Heading into this game it was clear that it would not be an easy outing for SJU, and in fact most probably assumed St. Bonaventure would win. What makes this game tough for the Hawks is the fact that they had let games against URI, George Mason, and La Salle slip.

The aforementioned games were close ones that the Hawks could have won. Instead, they lost those more “winnable” games, and now find themselves trying to claw back against the better teams in the A-10. Luckily, Saint Joe’s will get a week’s rest as they prepare to host Fordham on February 5th. After that, SJU will face Davidson, Umass, and George Mason, in that order. Coach Lange will be looking to right the ship in this upcoming stretch; hoping to win the next three of four games. That will no doubt be a tall task for a program that’s beginning to lose momentum.

A former D1 Athlete at Saint Joe’s, Tony has earned both Undergrad and Graduate degrees from SJU. As an athlete, he was apart of an A10 team title. As …

Anne Rollo is one of Australia's most accomplished Golf Professionals as a winner of 22 professional golf tournaments worldwide and with over 18...
Read more
Sports

Liv Morgan's growth as a WWE Superstar since 2015 has been well documented. Her tenacious attitude and undeniable charm have helped...
Read more
Sports

With the 2022 MLB amateur draft approaching on July 17, we will continue taking looks at some potential draft prospects for...
Read more
Load more