Home Sports NBA Shaedon Sharpe is worth gamble for Kings at No. 4
SportsNBA

Shaedon Sharpe is worth gamble for Kings at No. 4 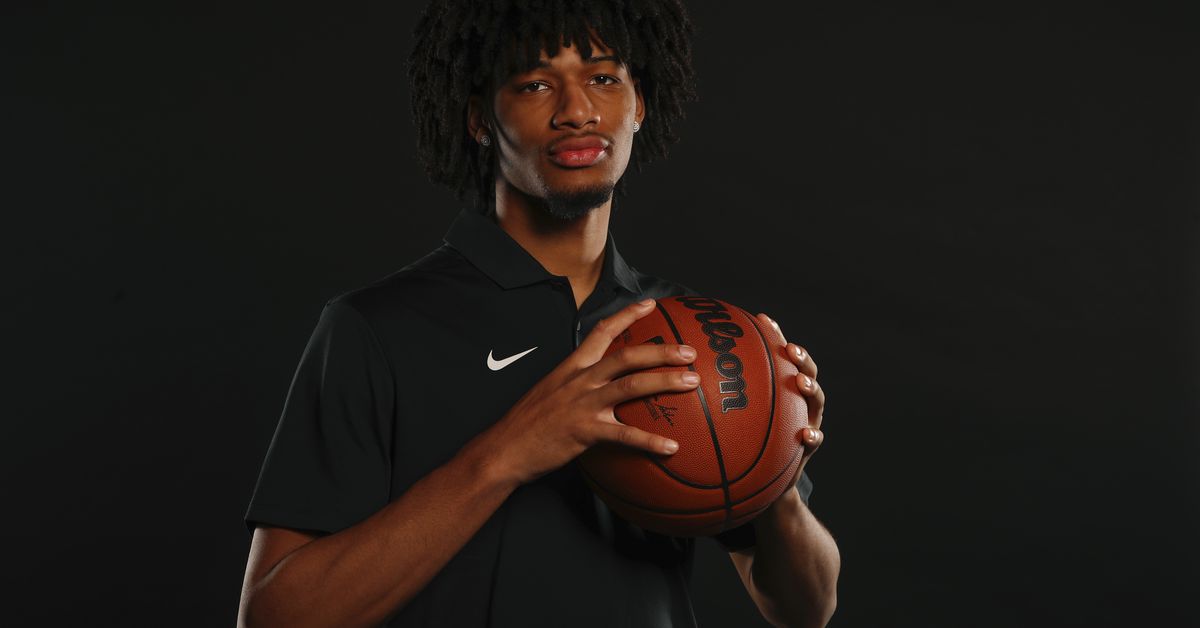 On Tuesday, the Sacramento Kings were blessed by the basketball gods, landing the No. 4 pick in the 2022 draft. The Kings absolutely needed some luck and another premium asset to add to their core of De’Aaron Fox and Domantas Sabonis, and now will get that chance on June 23.

Before the lottery, it was the most likely scenario percentage-wise that Sacramento would pick No. 8, a perfect spot to aim for a long-term starter or make it available for trade. Now sitting at No. 4, it is time to change that line of thinking and go star-hunting.

One prospect fits the Kings’ longstanding positional need, can shoot, and would walk into the NBA next season as one of the best wing athletes in the league, Kentucky wing Shaedon Sharpe.

At 6 foot 5, with a nearly 7-foot wingspan, with a 49-inch max vertical, Sharpe oozes potential. Sharpe could be the athletic wing shot creator that Sacramento has lacked since … forever? The guys who are playing late in the playoffs every year are these versatile wing creators that can score at all three levels and credibly make tough shots, which the Kings, over the course of this 16-year playoff drought, have never had.

Sharpe has a bit of Paul George in him, the way he plays at his own pace and can effortlessly get to his step-back jumper while remaining efficient. Sharpe also has George’s bounce and ability to throw down thunderous dunks.

George was the No. 10 pick in 2010 and took a few seasons to develop, but he was an all-star in his third season.

Shaedon Sharpe put on a show for NBA teams at his Pro Day in Chicago today, showing his shot-making prowess and explosiveness in front of quite a few decision makers. pic.twitter.com/tN5iLoZ3Pj

For Sacramento, this No. 4 pick is their best chance to land a bonified star player since the fateful 2018 draft, where they famously passed on one of the best players in the NBA in Luka Dončić, for Marvin Bagley III, who is now on the Detroit Pistons.

Admittedly, it is hard to evaluate Sharpe based on workout clips and high school highlights, but according to all credible draft experts, Sharpe is special. Draft experts like Givony and Sam Vecenie of The Athletic, who have seen him play in person, have noted his immense skill and length.

Now, there is certainly plenty of potential downside with Sharpe. His handle needs some work, and at just 18-years old with no college experience, it is possible Sharpe could have an underwhelming rookie season compared to his draft class peers, which might not be something the organization can stomach.

It was reported by veteran NBA reporter Marc Stein, that the franchise expects a ‘Minnesota-esque surge in the standings.’ Entering what is rumored to be the final year of his contract, general manager Monte McNair needs to do whatever he can to win as many games as possible next season. While I understand this line of thinking, it would be shortsighted to select someone simply because they are more “NBA ready,” like Murray, over a guy who projects to have more long-term upside. The Kings, in their current form, are at the stage where more than anything, they need talent.

I do not want to underrate Murray here because he projects as a solid forward that could fit really well in the frontcourt next to Domantas Sabonis long-term. After this jump in the lottery, picking Murray would be a bit conservative for my taste.

Would drafting a solid, long-term starter like Murray help you win a few more games in the 2022-23 season? Potentially. Does it drastically change this team’s long-term outlook? I would say no.

Currently, the Kings do not have a top 30 player in the league, which is pretty much a necessity for being a contender. Looking at Sacramento’s likely options, Sharpe seems like he has the best chance to get there.

I also can see the argument for drafting Purdue’s Jaden Ivey, who is supremely talented and has drawn comparisons to Donovan Mitchell and Ja Morant. In theory, he is a high upside, athletic guy like Sharpe, but with more certainty and proven success in college.

The downside is that picking him would put Sacramento in a similar bind that they were after the 2021 draft selection of Davion Mitchell, where they have an imbalanced roster with a ton of guards and not enough wings. Selecting Ivey would suggest that Fox or Mitchell probably aren’t long for Sacramento.

As we have seen over the last 16 seasons of playoff-less basketball, getting a star into Sacramento is nearly impossible outside of the draft or trade. After getting the No. 4 in the draft, the Kings are in a real position to strike gold, which Sharpe could be down the line.

Now is not the time for Sacramento to hit a double. It’s time to swing for the fences.

Chicago Cubs outfielder Seiya Suzuki is back with the big club after missing over a month with a sprained finger. He...
Read more
NFL

Something to look forward to: Skyrim's famous mod scene is still thriving after over a decade. This week, a...
Read more
Load more