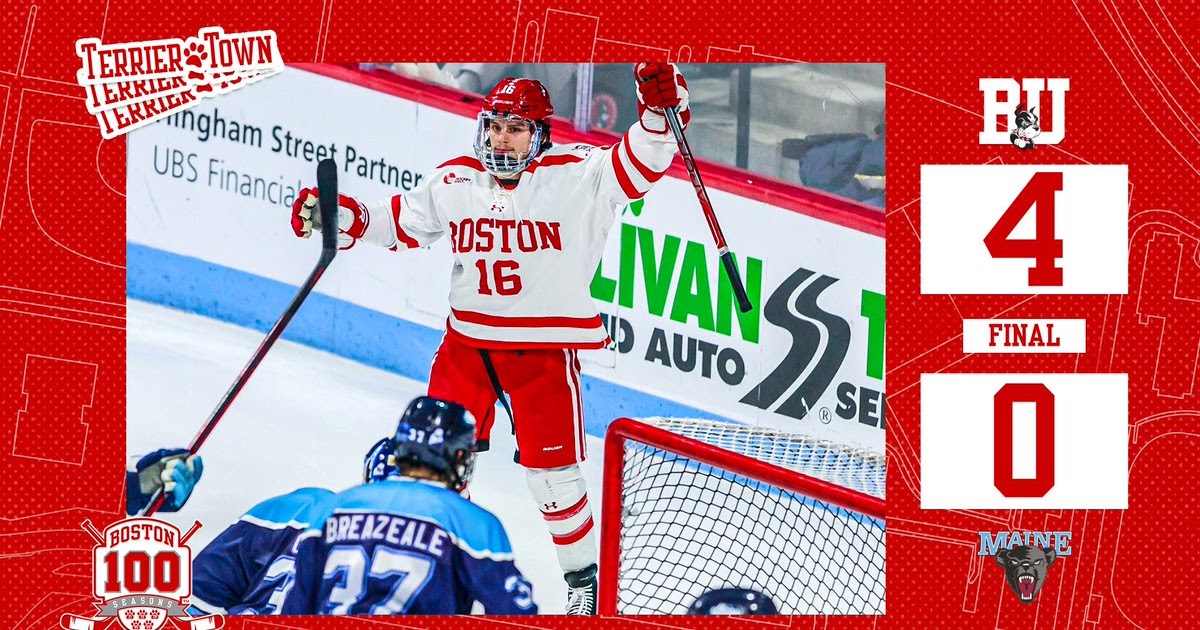 Behind two goals from Robert Mastrosimone and a 27-save performance from Vinny Duplessis, # 19 BU continued its strong play, blanking Maine, 4-0, at Agganis Arena. The win gave the Terriers a 10-1-1 mark in their last dozen games and kept them in third place in the Hockey East race.Duplessis, filling in for US Olympian Drew Commessowas poised and limited second-chance opportunities in his third start of the season, while lowering his GAA to 1.80 (See video highlights) and earning the game’s first star.

The Terriers’ speed set the tone from the get-go and quickly led to a power play. Case McCarthy, back in the line-up after missing the last six games, skated into the right circle, deked a defender and fired the puck to the slot. After Luke Tuch got his stick on the puck, captain Logan Cockerill buried it for his fourth goal of the season.

Mac makes an immediate impact in his first game back, as he sets up Coxy’s third goal of the season. pic.twitter.com/HQuYrjmMIu

Then at 11:49, Wilmer Skoog carried the puck behind the Maine cage and when defenders gave him some space, he quickly elevated the puck and deposited it over Victor Ostman‘s right shoulder for his ninth goal — and second lacrosse goal of his career. Mastrosimone and Joe Campolieto had the assists.

The second period was BU’s most dominant of the season in terms of shots (26 to 3) and puck possession. Five minutes into the period, Mastrosimone skated into the zone and sent a diagonal pass that eluded Ty Amonte. The senior center battled for the puck in the corner and tipped it to Max Kaufman, who rifled a pass to Mastrosimone just outside the left post for his 10th goal of the season.

Mastro’s 10th goal of the year pushes our lead to 3-0. pic.twitter.com/U2QGRLgm3Y

Five minutes later, the Long Island native struck again. In the offensive zone, Matt Brown tied up a Maine clearing attempt along the boards, sending the puck to Domenick Fensore at the right point. He closed to the top of the circle and wristed a shot that Mastrosimone redirected over Ostman’s glove for a 4-0 lead.

Some sweet hands from Mastro makes it a 4-0 game. pic.twitter.com/SWitmRUD7u

BU had numerous chances to extend the score. A wrap-around attempt was reviewed but did not completely cross the goal line and Tuch’s shot from the left circle eight minutes in caught the inside of the post. Ostman made several top-notch saves as well, including on Brown’s power move to the net.

Duplessis, who had a relatively quiet night after two periods, got busier in the third period. Aided by a pair of BU penalties, the Black Bears outshot their hosts 15-4, but the sophomore from Quebec handled them all to complete the shutout and then was mobbed by his teammates. 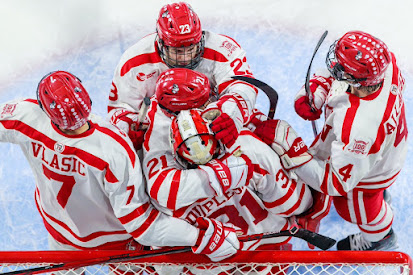 BU had a 33-24 edge at the face off dot, despite Maine narrowing the margin in the third period. Jay O’Brien won 12 of 16 draws. And once again, the Terriers hit double-digits in blocked shots with 14.

With 11 goals, Mastrosimone has exceeded the ten tallies he had over his first two seasons.

Following the game, a very please Coach Albie O’Connell said, “When we play the right way, we’re hard to deal with. Guys are pretty focused right off the drop of the puck. When you score first –– percentage wise –– you have a better chance of winning. ”

He added, “The second period was one of the best periods we’ve played all year.”

“Duplessis has not played in a while, and he got a shutout. He was pretty sharp. He was aggressive in his paint, and he did a good job,” O’Connell observed.

The second-year netminder gave credit to teammates for blocked shos and strong defense, and for the lift he got from the student section.

“It gave me a lot of extra energy today,” Duplessis explained after the game, “I heard a couple of Vinny chants here and there – that’s always pretty funny.”

Next up for BU is Monday’s opening game of the Beanpot against Harvard. It’s the early game, a 5 pm start at TD Garden.

2022 recruit Devin Kaplan, returning to the NTDP U18 lineup after being sidelined by injury, scored a goal and added an assist as Team USA outscored Muskegon, 9-8. Defenseman Lane Hutson had three assists for the U18s while his brother, Quinn Hutsonscored his 21st and 22nd goals for the Lumberjacks and has a team-high 49 points.

Trevor Zegras and Clayton Keller showed why they were invited to participate in the NHL All-Star Skills event.

DISGUSTING soft backhand chip off the post from @ ClaytonKeller37 during @NHL skills comp (Save Streak). pic.twitter.com/1emmtSaZZi 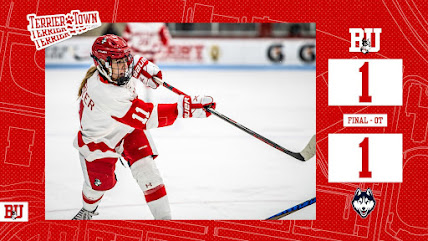 After a scoreless first period, the Huskies took a 1-0 lead midway through the second. Minutes later, with BU on a penalty kill, Parker broke up a play, skated in alone and scored her ninth goal.

UConn threatened several times in overtime, but Shanahan slammed the door each time. After Kylie Roberts gave BU a 1-0 shootout lead after two rounds, Parker ripped her opportunity home to give BU the extra point.

Terriers are back on the ice tomorrow, visiting BC Saturday afternoon. Game Day links.

David Benavidez Vs. David Lemieux next Saturday, May 21 on Showtime

By Jack Tiernan: David Benavidez and David Lemieux headline next Saturday night on Showtime on May 21st in a battle for the interim...
Read more
Load more