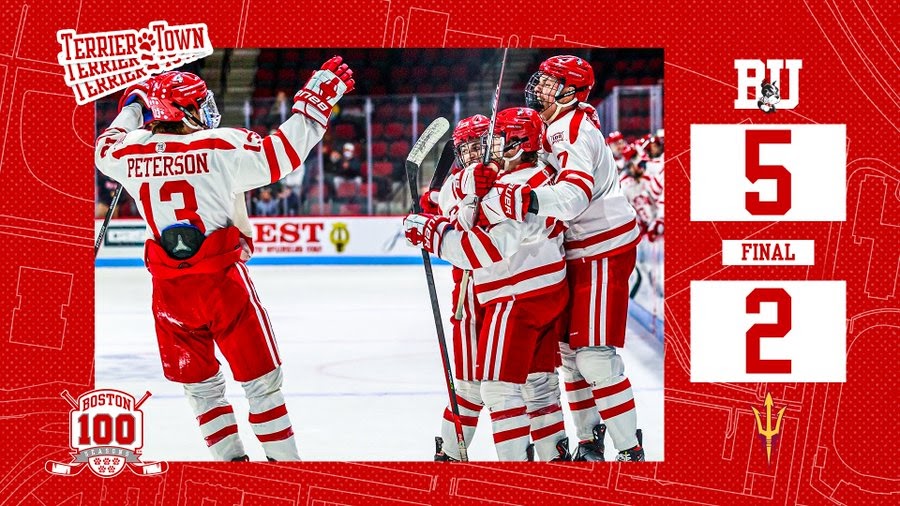 Led by Luke Tuch‘s second two-goal effort in the last three games, the Terriers completed a sweep of its weekend series with Arizona State winning 5-3. BU held a 4-0 lead after two periods before two third-period goals by the Sun Devils made things interesting.

The victory evens the Terriers’ record at 9-9-3. Since the loss to Cornell on Nov. 27, BU is 5-0-1 in six games and now begins a stretch of six conference games before February’s Beanpot Tournament.

Terriers followed Friday night’s formula, coming out fast and hard. They dominated the first period but were not rewarded until 14:29 when
Jay O’Brien controlled the rebound of Alex Vlasic‘s shot to the right of goalie
Ben Kraws. He slid a pass through the crease to Ty Gallagher who had moved to the right circle for a one-timer and his second goal of the weekend.

Goal 4 for number 4 during 4-on-4. #symmetry pic.twitter.com/NVDUpQntzu

In the final half-minute of the period, Vlasic made a strong move to keep the puck in the offensive zone and took it deep. It was sent to the point to Dominick Fensore who moved it quickly down low to Robert Mastrosimone. Mastro’s cross-ice pass found Matt Brown in the left face-off circle for a wrister into the net with just 0.6 seconds remaining.

Taking you into the second period with Brownie’s buzzer beater! pic.twitter.com/emHEWIRDdn

The teams combined for 27 shots in the middle people and again the scoring did not occur until late in the period. Cade Webber began a breakout from the BU zone and his pass was redirected by Max Kaufman to an unmarked Tuch skating up the right side. His hard wrister from the right circle beat Kraws high to the stick side for what would prove to be the game-winner.

What an end to the second period for Luke Tuch! Here’s his first of two goals in a span of 1:05. pic.twitter.com/6BWbYqzjA1

A Sun Devil takedown of Kaufman on the sequence put the Terriers on the power play and it took just 1:05 to convert. Brian Carrabes won a puck battle along the boards to O’Brien who mailed it to Fensore at the left point for a snap shot that Tuch redirected home for a 4-0 lead.

The officials reviewed this one, probably to admire Tuchy’s redirection, before the score officially became 4-0! pic.twitter.com/rSZfyh5Z28

Once again a shutout for Drew Commesso was not to be. Midway through the final period, ASU controlled the puck in the BU zone for several minutes and Tim Theocharidis‘s shot from the point sailed past the screened Terrier netminder

Three minutes later, a Ty Amonte interference penalty at 13:21 provided the visitors with a power play and then a cross-checking call on Webber made it 5-on-3 for about 40 seconds. BU killed off the two-man advantage and Amonte nearly scored on a breakaway coming out of the penalty box.The rest of the power play was killed, but Arizona State stayed on the attack. A turnover to the right of the BU goal led to Josh Doan‘s sharp angle shot that leaked through Commesso and cut the lead to 4-2.

ASU pulled Kraws for an extra skater but was unable to produce a grade A scoring chance. With the puck in the Sun Devil’s zone, O’Brien trapped a defender along the boards, stole the puck and deposited it into the empty net.

O’Brien, Brown and Gallagher each scored in both games, and O’Brien had a five-point weekend: 2G, 3A. Since returning to the lineup against Brown, he has seven points in three games and ten points in 11 games on the season.

Following the game, Coach Albie O’Connell said, “It was nice getting the sweep. It was not a perfect game for us. I thought we played better last night. They [ASU] came out really hard and they played right down to the wire.

“We had some really timely goals, especially the ones at the end of the period. We scored a big power-play goal, we had a 4-on-4 [goal].

O’Connell was quick to praise the performance of Commesso, who stopped 36 shots and also handled the puck quite well. “We were hoping [Commesso]
would be one of our best players every night. He was tonight. “

He felt his team played very well into the first 10 minutes of the third period “and then it got a little bit disjointed. We’re going to have to get better in the third period in some of those scenarios and make sure we stick to our structure. ”

With three penalties killed, BU’s PK success streak has reached 21, but O’Connell felt that number does not tell the entire story. “We had some bad reads throughout this game, he explained. “Even though the numbers look good, some of that was the goaltender and you need hm to be your best penalty-killer at times. “

After suffering their second loss of his season, a 6-2 defeat by Clarkson, the Terriers completed their North Country weekend with a 5-3 win at St. Louis. Lawrence. Captain Jake Danby—En route to an All-American season — scored twice in the first period, sandwiched around a Guy Burrowes tally for a 3-0 lead.

The Skating Saints cut into the lead with a goal six minutes into the second period, but BU restored the three-goal lead at 10:09 on Billy Flynn’s first collegiate goal.

St. Lawrence made things interesting with a pair of scores 19 seconds apart early in the third period, but Steve Dolloff‘s breakaway goal at 11:18 gave BU some breathing room and a two-goal lead that stood up. Dan Brady—Who also would become an All-American in 1971-72 — had 29 stops for the Terriers who improved to 10-2-1.

Red-hot Evan Rodrigues was finally cooled off and it took a Terrier to do it. Jake Oettinger stopped 25 shots — including four from ERod — as Dallas rallied to defeat Pittsburgh, 3-2
in a thriller, and snap the Penguins’ 10-game winning streak. Rodrigues, skating on Pittsburgh’s top line also had a shot go off iron. The Penguins had 12 former college players in their lineup.

Clayton Keller‘s 12th goal was of the highlight-reel variety: he went straight ahead with a face off he won and scored from along the goal line. But it was not enough in the Coyotes’ 4-2 loss to Nashville.