The AT&T Pebble Beach Pro Am: The leading title contenders heading to the Monterrey Peninsula 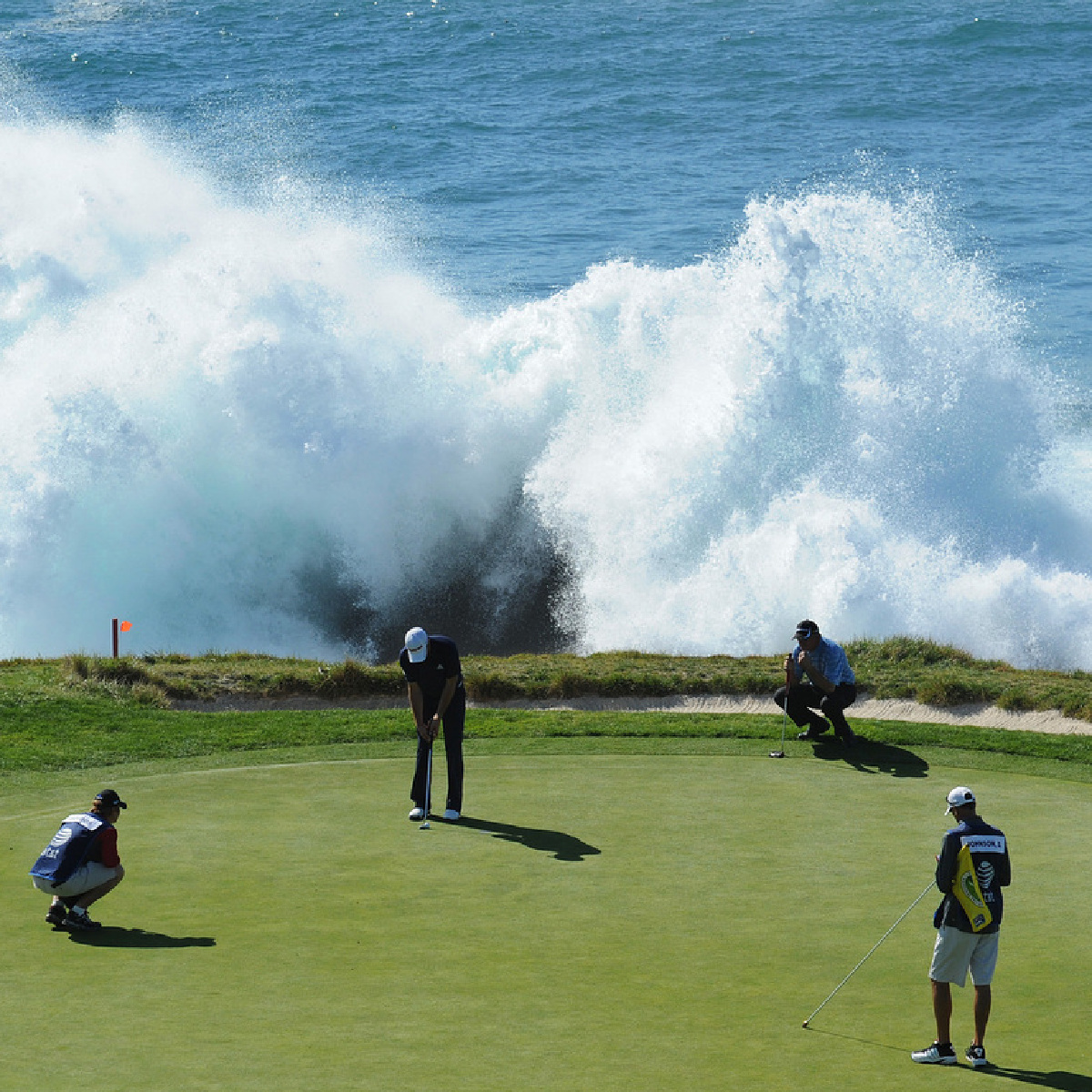 Take a look at that photo: golfers, a small green, an enormous wave.

This week the famous layout will once again welcome the PGA Tour for the AT&T Pro Am and while non-American TV audiences are often a little baffled by the “Am” section, not knowing who many of the celebrities are, they always tune in for the views.

Pebble Beach hosts one pre-cut round as well as the final lap. There is also action from Spyglass Hill and the Monterrey Peninsula CC. The trio are all situated on the cliff tops, the ocean is almost always in view, the fairways are invitingly sneaky, the greens tiny, the fun factor as enormous as those waves.

Let’s take a look at the leading contenders.

A five-time visitor to the tournament, Patrick Cantlay is yet to miss the cut, has landed three top 12 finishes and last year recorded a best of tied third. He’s also finished T21st at Pebble Beach in the US Open.

A weakness of his case is that he gets off to very good starts (always T13th or better after 18 holes in this event, four times top five), but drops down the leaderboard afterwards (even last year he went from solo first to third) .

He closed the 2020/21 season with back-to-back wins, opened 2021/22 with fourth at the Tournament of Champions and a disappointing tied ninth in The American Express when, as at this event last year, he spurned a fast start.

The defending champion was no surprise winner, having finished tied fifth 12 months earlier and T10th in his only other tournament appearance.

He’s been brilliant since the start of 2020, with 24 top 20 finishes from 38 starts, 17 of them top 10s. In addition to the win here he also claimed the Charles Schwab Challenge.

Finished T20th at Torrey Pines last week, hitting more fairways than anyone in the field. Said after the win 12 months ago: “It’s just a special place. Every time you step up to the tee, you just, you tend to take in the sights and sounds and do not really focus on the golf as much and I think that’s kind of helpful for me. “

Will Zalatoris nearly broke his win duck last week at Torrey Pines, but was eventually defeated in a play off by Luke List. It’s notable, however, that he continues to thrive on Major Championship standard golf courses. Last season he registered three top 10s in the Majors, plus another at Torrey Pines.

Two visits to this event have not reaped great rewards. He’s struggled t go really low in any lap and has four times needed at least 73 blows.

Said after last week: “It was a lot of fun. I fought like hell all day. I thought today I battled really well. I’m fortunate enough I’ll be playing next week too on a few golf courses I know really well . “

Nine appearances in the tournament and Jordan Spieth has only once failed to end the week in the top 25. Five times he was in the top 10, in 2017 he lifted the trophy, and last year he led with 18 holes to pay before finishing tied third.

He was in a fine vein of form this time last year and it culminated with victory in the Texas Open followed by top three finishes at both the Masters and the Open. Then the birth of his first child had something of an impact on his form.

Had a slow start to 2022 with T21st at the Tournament of Champions and a missed cut last week in the Farmers Insurance Open.

He loved being back in contention last year. “I like the anxiousness and the nerves that come with this,” he said. “I mean that’s why I love the game. In golf the ball’s in your hands so you get to win or lose it.”

Last week’s 54 hole joint leader at Torrey Pines (where he is a two-time champion) and he threatened to win on the back nine before claiming a share of third. The result was only his second top 10 since landing tied seventh at this event last year.

He has a spectacularly fine tournament record which reads: 12 starts, 10 top 15 finishes, eight of them tied seventh or better. He was also T21st in the US Open. What he has not managed to do is win there.

He was happy after the near-miss at Torrey Pines on Sunday. “Good quality week, a lot of positives moving forward,” he said. “This is just the second tournament with these swing changes. It’s great that the progress is kind of is where it is.”

He’s yet to win on the PGA Tour but he is an exceptional performer on Poa Annua in his home state of California. In addition to the success he had in this event he has two top 30s at Torrey Pines (including last week when second for Putting Average) and second at last September’s Fortinet Championship at Silverado.

Said after last week’s tournament: “I would not be teeing it up if I did not think I could win. I think it’s very, very hard to win on the PGA Tour.”

Surprisingly, Justin Rose has made few visits to Pebble Beach. Especially given that he played it very well. He was tied sixth on debut in this event in 2016 and T39th in 2017. Then he was tied third at the 2019 US Open.

A winner at Torrey Pines, he impressed there last week when tied sixth and although he has not played a lot since last June, he also has not missed a cut.

Said after signing his card last week: “I take a lot of positives that you come to a golf course like this and contend.”

READ MORE: Which of the world’s leading golfers win the most and what are their strike rates?

Game Changer Wrestling held their event GCW: Dead on Arrival at the Knights of Columbus venue in Detroit, Michigan. The event is the...
Read more
Sports

Khabib Nurmagomedov had plenty of influences in his career which helped lead him to a historic run through the UFC and...
Read more
BOXING