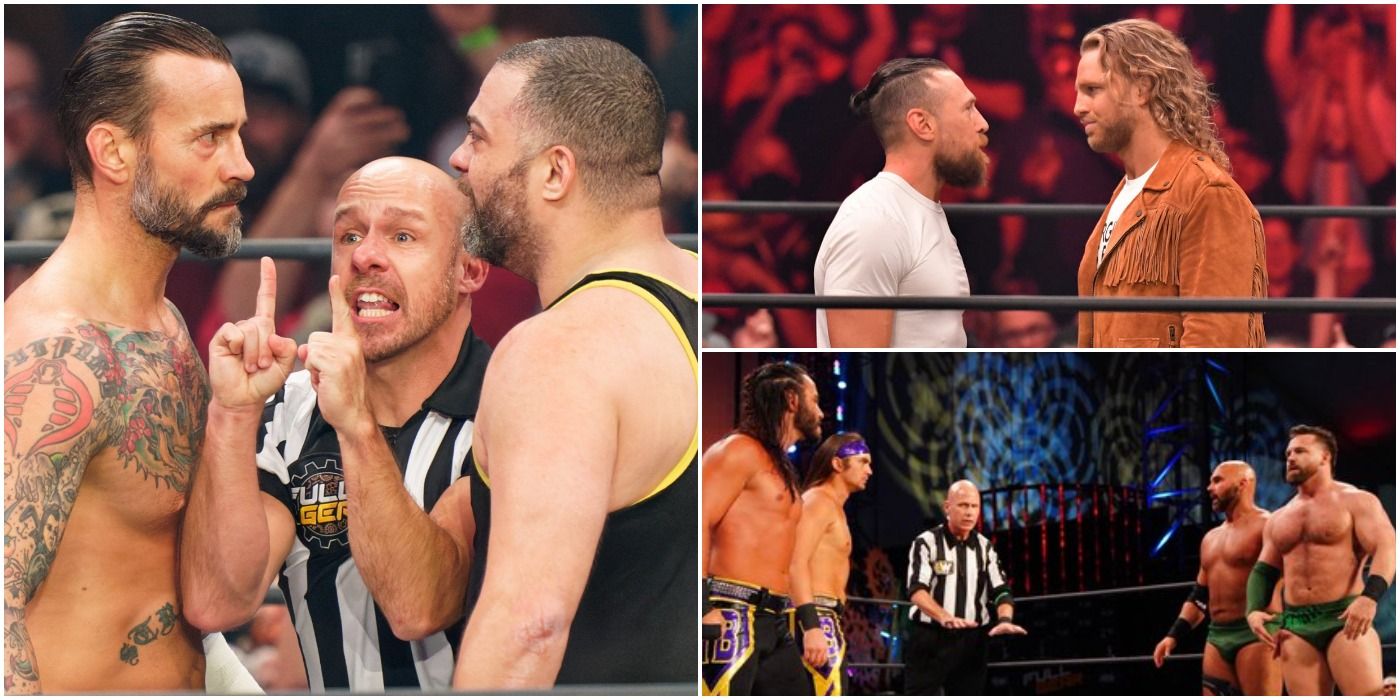 AEW has done a lot of recruitment over the last few years, bringing in a lot of names from around the wrestling world, with many ex-WWE stars making the move to the new company, leaving their former home behind. One of the major drawing points to AEW is the high-energy and hard-hitting wrestling.

Lots of these former WWE stars have been experiencing some of their stronger work in their entire careers, with standout matches and five-star classics. Perhaps some have not quite reached the heights of matches they had in WWE, but it is certainly interesting to look at their best matches in AEW thus far.

When FTR were The Revival in WWE, they made it no secret that their dream match was against The Young Bucks. When they left the company, this match between two of the biggest and best teams in recent memory seemed to be an inevitability, with a lot to live up to when it comes to fan expectations.

At Full Gear 2020, the two teams did battle in a classic encounter, featuring several homages to the best of tag team wrestling. In many ways, their match was a love letter to all the great teams, with a lot left out for whenever an eventual rematch takes place. It was a phenomenal match, and perhaps FTR’s best since their battles with DIY in NXT.

PAC has had several strong matches in AEW, with his singles encounters with Kenny Omega being some major highlights in the earlier stages of the company. However, at Double or Nothing 2021, arguably his best match came during a triple threat match for the AEW World Championship alongside Omega and Orange Cassidy.

PAC played a key role in making fans believe that Cassidy was seconds away from winning the belt, and he performed to the high level that he always does. Perhaps his best performance was in his Iron Man Match against Omega, but in terms of excitement, this one exceeded it, even if he was not the focus.

Both of Christian Cage’s singles matches with Kenny Omega were fantastic, but their first match on the first ever AEW Rampage just about beat their rematch. AEW made a bold move by having the two men battle just weeks before their PPV main event, but with excitement for the match being low, their match for the Impact World Championship was set to show the world exactly what they could do.

Their chemistry was undeniable, the action was exciting, and the crowd was electric. Cage would come out on top amongst ringside shenanigans, but it was an organized chaos which worked well. Cage hadn’t missed a beat in his many years away, with his matches with Omega being perhaps his best since his series with Randy Orton.

Tay Conti was someone who never really got a chance to shine in WWE, and her run in AEW has proven what a mistake that was. She has become one of AEW more popular female stars and has improved leaps and bounds in the ring.

Her best match came only recently, in a brutal street fight alongside her friend and tag team partner, Anna Jay, taking out The Bunny and Penelope Ford. This match has split some fans, with the blood being too much for some, but there is no denying the impressive nature of the match, and their efforts must be respected. It was a great encounter full of big spots and quick action.

Although he has had a rough time when it comes to booking, Andrade has still showcased his strong in-ring work, most evidently when it comes to his singles matches on Rampage against PAC. Their first match delivered, but their second match stole the show.

RELATED: 10 AEW Wrestlers Who Will Never Be World Champion

Their chemistry together was off the charts, and they each pulled out some innovative spots, getting the fans invested in a feud which hadn’t quite got off the ground running. It is a shame to see Andrade not get much momentum going forwards after this match, but AEW will surely have to take note if he puts on performances like this.

6 Matt Hardy: w / The Elite Vs The Inner Circle

The first Stadium Stampede Match at Double or Nothing 2020 was a huge, creative triumph for the pandemic era of wrestling. The ten-man war between The Elite and The Inner Circle explored an entire stage, with a perfect mixture of physicality and comedy, with this being the best presentation of Matt Hardy in AEW.

Although his “Broken” gimmick did not quite work out in the company, it was perfect within this environment, and the entire match remains to this day as one of the best in AEW history, with it being the best match of Hardy’s time in AEW, with not too much else to shout about during his run.

There could be a big argument to be made that Moxley’s matches with Kenny Omega are the best during his time with the companybut from a storytelling standpoint inside the ring, his AEW World Tag Team Championship pursuit alongside Eddie Kingston against The Young Bucks was outstanding.

In the first event back with a full audience at Double or Nothing 2021, Moxley helped steal the show with potentially the match of the night. It was a great back and forth war between two strong teams, with fans believing at several points that the faces could pull off the win.

Since becoming “The Redeemer”, Miro’s character work has been sensational, becoming one of the most entertaining and enthralling parts of weekly TV. However, from an in-ring perspective, he has not stood out too much. His singles match with Bryan Danielson was a good performance, but his best match actually came when he was “The Best Man”.

During the unpopular start of Miro’s run in AEW, he and partner Kip Sabian teamed up to face Chuck Taylor and Orange Cassidy in an “Arcade Anarchy” match, which was much better than it should have been. It was a match full of fun moments, returns, and one of the most satisfying endings to an episode of Dynamite.

Cody Rhodes’ first ever AEW match is still his best, and it still may be up there with the best in company history. At Double or Nothing 2019, Cody and his brother Dustin finally got the match they’d lobbied to have for years, and it exceeded all expectations.

It was an emotional, bloody battle between brothers, and it helped to put AEW on the map, stealing the show and proving just how good both men are.

Punk’s recent classic with MJF must be in contention for his best match in AEW, but until that match manages to cool and be looked back on with hindsight, his match with Kingston at Full Gear 2021 remains his best since his return.

His war with Kingston felt like a true fight between two men who hated each other, with it being fast-paced, brutal, and over in around ten minutes. It was different to anything fans had seen from Punk in many years, even since his WWE run, and it was accepted with open arms as a fantastic performance.

Danielson has been on an inhuman hot streak since his AEW debut, with several matches that could be considered as his best, and one which will differ hugely between the opinions of fans. Both matches against Adam Page, his debut against Kenny Omega, and others against the likes of Minoru Suzuki and Eddie Kingston are all in contention.

However, his 60-minute time limit draw against Adam Page was one of the most masterfully crafted matches in recent memory, with the match flying by and not feeling as long as it was. It set up a perfect rematch, which was nearly on the same level as this one. With the way he is going, even more contenders to Danielson’s best match will likely be added.

AEW has the best tag team division in the wrestling industry; not only do they prove it in the ring, but they have the mic skills as well!

Andrew Kelly is a writer from The Wirral, England. He is an MA Graduate from the University of Manchester, and a BA Graduate from Liverpool John Moores University, both in Creative Writing. Can be found on Twitter @ andrew_kelly0

When you open your computer, the lock screen of your Windows 10 computer shows you a different image every day. To have...
Read more
SOCCER

In every league around the world, each year brings the unexpected breakthrough of a few new talents. The first three...
Read more
NBA

Carmen Alonso of Spain holds a one-stroke lead in the Jabra Ladies Open presented by Bitstamp after shooting an opening round of five-under-par...
Read more
Load more