The BU Hockey Blog: BC Preview 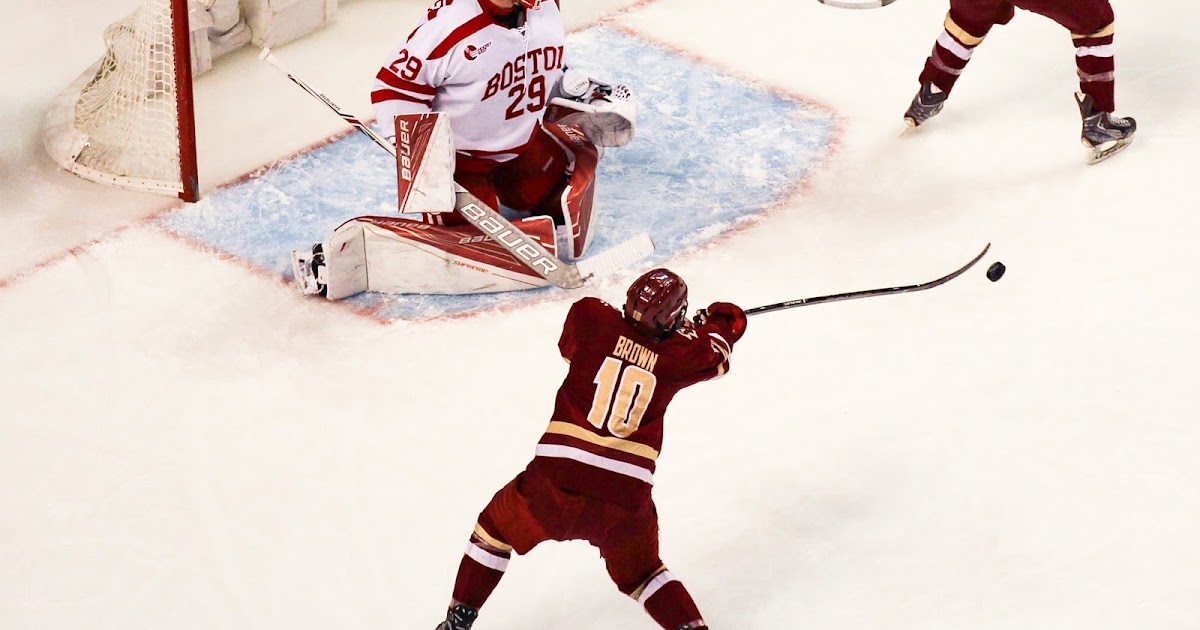 There’s not much left to say with this. It’s No. 18 Boston University and No. 14 Boston College in the Hockey East semifinals for the second consecutive year. Both teams return to TD Garden after they swept their respective quarterfinal series to advance to play for a shot at the Hockey East Championship game.

“It’s gonna be exciting,” said Coach Quinn after he was informed his Terriers were playing BC in Saturday night’s postgame press conference. “We had a great game with them last year, unfortunately, we came up on the wrong end of the stick. It’s a new year, two new teams. Anytime BU and BC play it exciting, but when it’s in the semifinals of the Hockey East playoffs, it gets more exciting. ”

Despite getting heavily outplayed at times, the top-seeded Eagles (20-13-3, 18-6-0 Hockey East) dispatched Merrimack in two games. Friday night saw BC get outshot 37-13, but Connor Moore notched a power-play goal late in the first period that proved to be the eventual game-winner.

Game two offered a little more offense, with BC skating away with a 4-3 overtime decision thanks to a Christopher Grando shorthanded goal 4:20 into the extra session.

BU (19-3-4, 12-8-4 Hockey East) also used a pair of one-goal wins to slid past the Connecticut Huskies in the four vs. four. five series at Agganis Arena. The Terriers used a pair of third-period comebacks to draw even with UConn in game one, before Bobo Carpenter notched the game-winner on a wraparound goal just over five minutes into overtime.

In Saturday’s squabble, Jake Oettinger turned aside 36 shots, including 15 in the third period, to preserve a Logan Cockerill go-ahead tally that came late in the second frame.

For both teams, this game is do or die. BU and BC are both on the outside looking in when it comes to the national tournament. The Eagles are slightly ahead of 18th place BU in the PairWise, sitting at 15th. The cut line is now 14 after Minnesota State lost to Michigan Tech in the WCHA semifinals. Mankato is already a lock to make the tournament, as they are 6th in the PWR, but now the winner of Northern Michigan and Michigan Tech will get an automatic bid.

Both BU and BC virtually have to win Hockey East to get in, meaning this is a true elimination game for both teams. This is a scenario that has not happened in the BU-BC rivalry since the 2006 NCAA East Regional final. All in all, it has only happened four times in the rivalry’s history, 1976, ’77, ’78, 2006. In those four contests, the Terriers are 3-1.

Scouting the Eagles
BC are winners in seven of their last eight, including six consecutive dating back to February 15 at UMass. The Eagles went an impressive 18-6-0 in Hockey East this year, to claim at least a share of the league title for the second straight season. The thing keeping BC out of the national tournament at the moment is their out-of-conference woes. BC is a staggering 0-8-3 in non-conference play, and they still have not won an out of league game since October 2016.

Offensively, freshman Logan Hutsko has carried the torch for BC. In 26 games played, the Tampa, Fla. native and Hockey East Rookie of the Year has amassed 31 points on 12 goals and 19 assists. Not far behind is sophomore David Coton, who has recorded nine goals and 18 assists for 27 points. Graham McPhee and Julius Mattila have both also accumulated a dozen goals thus far. Other players to watch include Casey Fitzgerald, Michael Kim and JD Dudek.

Between the pipes, Joe Woll was the sole reason BC survived the Merrimack series. The sophomore netminder stopped 67 of 70 Warrior shots on the weekend. Over the course of the season, Woll is the owner of a .915 save percentage and a 2.45 goals-against average.

History
BU and BC have squared off five prior times in the Hockey East Semifinals. BU came away victorious in three of those meetings, starting with a dramatic 2003 double overtime game. BC led 5-4 late in the third, before Justin Maiser scored, sending the game to overtime. There, Maiser completed a hat trick, scoring roughly five minutes into the second overtime to send BU to the finals, where they lost to UNH, 1-0, again in double OT.

The next meeting was in 2007. BC cruised to a 6-2 win on goals from six different skaters. In 2009, BC needed a win to prolong their season, but BU had other plans. Trailing 1-0 midway through the third, BU erupted for three goals in 43 seconds to eventually push past the Eagles 3-2. This was the last time either BU or BC ended one another’s season.

The 2013 matchup featured the Terriers needing a win to stave off elimination from the national tournament. Despite trailing 2-0 after the first, BU stormed back, as Evan Rodrigues and Danny O’Regan both scored twice. Garrett Noonan and Matt Lane also added goals in a 6-3 win to put the Terriers in the final. Their season came to an end with a 1-0 loss to Lowell.

Then there was last year. Even though BC had a share of the league title, the Eagles still had to win Hockey East to qualify for the NCAA tournament. Ryan Fitzgerald netted two goals and Julius Mattila added another, and the Eagles held a 3-0 lead late in the third. BU scored two extra-attacker goals to make things quite interesting down the stretch, but the Eagles hung on and advanced to the championship game, where they fell to Lowell.

Friday night’s contest will begin at 5 pm at TD Garden.

Fantasy Baseball News - May 17, 2022 Willson Contreras was the driving force behind Chicago's 9-0 win over Pittsburgh on Monday, going 2-for-5 with...
Read more
Load more