The BU Hockey Blog: End of the Line 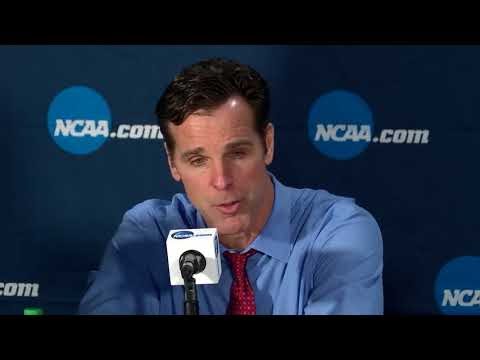 BU finally went to the well one too many times before it dried up Sunday afternoon at the DCU Center in Worcester, as Michigan put a swift end to BU’s impressive late-season run with a 6-3 victory over the Terriers to advance to the Frozen Four.

In the case of every season-ending loss, emotions were on display at the postgame press conference. Here are a few clips:

Throughout the postseason run, the resilient Terriers never stopped battling. BU overcame 1-0 and 3-1 deficits, but this time was never able to get the lead. In the second period, with Michigan leading 3-1 on goals from Quinn Hughes, Toney Calderone and Brendon Warren, BU’s Patrick Curry put home a wraparound goal to cut the Wolverine lead in half, midway through the second frame.

Drew Melanson then tied the game 3:30 into the third period. Jordan Greenway, who notched the first Terrier goal, caused a turnover right in front of Michigan goalie Hayden Lavigne (24 saves). From the edge of the crease, Melanson corralled the puck and slipped it in behind Lavigne for his sixth goal of the year.

Michigan had an answer less than three minutes later. Jake Slaker skated in one-on-four across the BU blue line before unloading a shot at the top of the circle that deflected off BU defenseman Cam Crotty and fluttered past Terrier netminder Jake Oettinger (16 saves).

“We seemed a little bit nervous,” said coach Quinn. “I thought as the game went on, we got a little bit better. We kinda found our rhythm. We did a lot of good things and then we made it 3-3 and you could feel the energy on the bench and then just, unfortunately, one goes off a shin-pad and into the net. ”

BU had a few chances to tie up the game, but Nicholas Boka picked a good time to net his first goal of the year, scoring with less than 3:42 left to ice the Terriers. Nick Pastujov added an empty net goal minutes later to round out the scoring.

Michigan is back in the Frozen Four for the first time since 2011 when they lost to Minnesota-Duluth in overtime of the National Championship game in St. Louis. Paul. Michigan will face Notre Dame in the national semifinals and Duluth matches up with Ohio State.

For BU, a season that started with unreasonably high expectations considering the talent that departed early (Jakob Forsbacka Karlsson, Charlie McAvoy and Clayton Keller) ended exactly where last year’s team finished. Like Quinn said, to go from where this team was on January 6th (8-11-1), to win Hockey East and an NCAA tournament game is pretty remarkable.

Let’s also not forget, Patrick Harper, the only skater on the roster to average more than a point a game, did not play a single game after January 6th due to a season-ending illness. In his absence, Jordan Greenway and Bobo Carpenter took over the scoring lead, but it also allowed some of the younger guys to develop.

Logan Cockerill exploded onto the scene second semester, scoring critical goals, including one in the Beanpot semis against Harvard and the game winner in game two of the Hockey East Quarterfinals vs UConn. In that stretch, the freshman recorded a 10 game point streak from January 26th to March 10th.

David Farrance, while he fit in nicely at forward for a bit, was shifted back to defense this weekend of the Hockey East championships at Boston Garden. He immediately looked more confident and his stats mirrored that. Farrance scored, at the time, the game-tying goal against Boston College in the semis and the game-winner against Cornell last weekend at the NCAA’s. He was also named to the “All-Regional Team.”

The big names recruits – Brady Tkachuk and Shane Bowers – showed why they were so highly touted. Bowers was an instrumental piece on the second line with Bobo Carpenter and Logan Cockerill. When Greenway returned from Olympic competition, Tkachuk and senior Drew Melanson formed a surprisingly dominate top line for the Terriers that scored near every ‘big time’ goal down the stretch.

Unfortunately, only one of those three will even potentially be back in the lineup next Fall. Obviously, Melanson being a senior means he’s graduating. In the case of Greenway’s, the junior from Canton, New York finally inked a deal with the Minnesota Wild and could be in the lineup tomorrow against Nashville. A lot still up in the air with Tkachuk, as well. He will undoubtedly be a top-10 pick come the NHL Draft in June.

There is certainly a lot to like about where the program is right now. If Greenway is the only early departure, the team is still in fantastic shape going into next year. NTDP players Jake Wise and Joel Farabee headline yet another top-notch recruiting class for Quinn and staff.

Yes, it’s disappointing the way it ended, but there is a lot to look forward to for BU hockey.