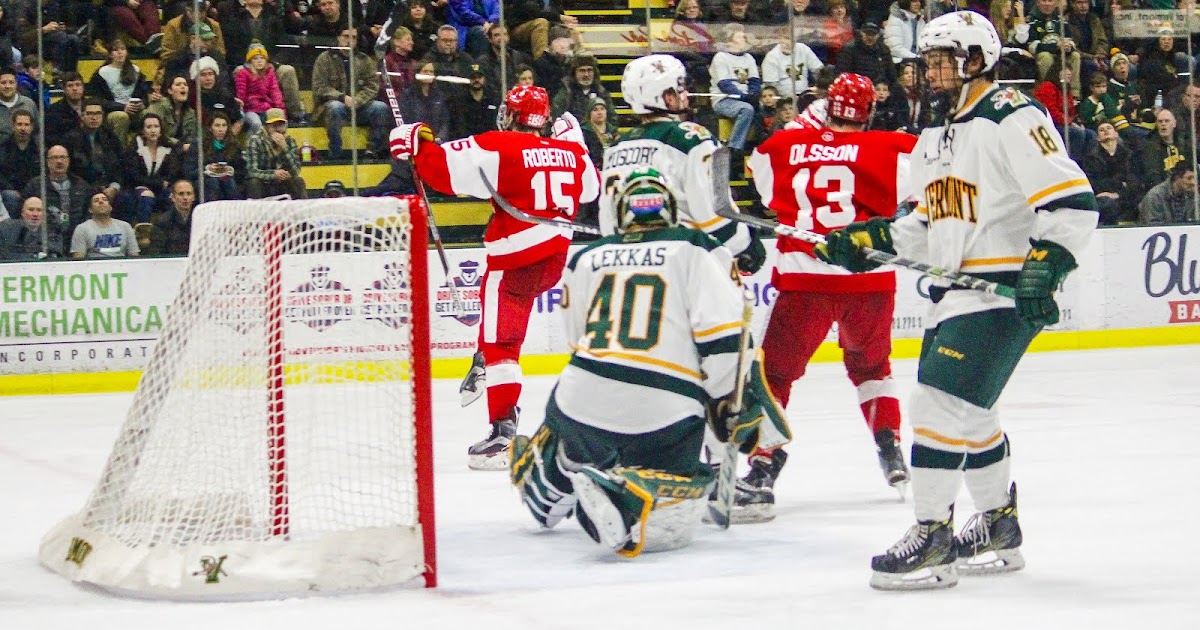 The regular season comes to a close this weekend at Agganis Arena with Boston University looking to lock down home ice in the Hockey East Quarterfinals in a two-game set against the Vermont Catamounts.

The Terriers bounced back nicely last Saturday night in North Andover with a 3-1 win against Merrimack after a devastating 5-4 overtime loss to Connecticut the night before. The story of the UConn game was BU’s penalty kill, as the Huskies scored twice on the man-advantage in the third period to overcome Terrier leads of 3-1 and 4-2.

Saturday at Merrimack was a different story. BU blanked the Warriors on the power play and that included a five minute major to Brandon Hickey.

“The thing I liked about the Merrimack kills was the time of it and the way we killed it,” BU Head Coach David Quinn said. “Not only were we successful killing it, I thought we gained momentum from it and I think we might have demoralized them a bit.”

Quinn said he expects Jordan Greenway to be back in the lineup Friday night but said Patrick Harper is still out for this weekend.

Scouting the Catamounts
Much like BU, Vermont went on a serious hot streak through late January and into February, going 5-0-2 from January 20th to February 16th. In that time span, the Catamounts dug themselves out of the bottom of the league standings and are now in a position to host a first-round series in the Hockey East playoffs. Vermont currently sits in 8th place.

Last weekend, UVM was quickly cooled off at the hands of Northeastern. The Huskies swept the weekend series in Burlington, winning 4-3 in overtime Friday night before rolling to a 4-1 victory the following night.

Sophomore Ross Colton has carried the torch offensively for Vermont. In 31 games, the Tampa Bay Lightning prospect has notched 15 goals and added six assists for 21 points. Freshman Alex Esposito is not far behind in the points race, amassing 19 by way of nine goals and 10 assists. Other players to watch include Matt O’Donnell and two former BU commits in Liam Coughlin and Jarrid Privitera.

In the crease, Stefanos Lekkas has had a strong sophomore campaign. In 30 appearances, he has registered a 2.88 goals against average a .912 save percentage.

BU Hockey East Seeding Scenarios
UConn’s loss to Massachusetts on Thursday night clinched the Terriers a first-round bye in the Hockey East tournament. BU can either be the fourth seed or the fifth seed and depending on this weekend’s results could host UConn, Maine or UMass-Lowell or travel to Maine for the quarterfinal round.

How BU gets the four seed:
– BU gets at least three points vs Vermont
– A BU win or two ties, coupled with one Maine loss to Boston College
– BC sweeps Maine, or Maine only gets one point

How BU gets the five seed:
– Maine earns two more points vs. BC than BU does vs. Vermont (for example, Maine sweeps BC and BU gets two points or less, or Maine gets three points while BU gets one), as Maine owns the head-to-head tiebreaker with a 2-1 record during the regular season.

The former WBC 122-pound champion says he's better than ever as he prepares to make his featherweight debut against Carlos Castro in a...
Read more
MLB

Russell Wilson sent the sweetest anniversary message to Ciara on Twitter, which should make everyone swoon.Russell Wilson has set the bar as...
Read more
Load more