See this guy? He’s a Winnipegger playing hockey in Atlanta. That’s Kamerin Nault who is currently tearing up the ECHL with the Atlanta Gladiators after signing with the ECHL squad back in January. Nault has recorded four goals in his last five games entering play against the Cincinnati Cyclones tonight, and the Gladiators are on an upward trajectory as they’ve recorded twelve wins in their last 15 games. Part of that is due to Nault and his teammates getting some clutch scoring, but there’s another player who is rewriting the ECHL history books in terms of career achievements who has been a large part of Atlanta’s success this season!

You probably have not heard of Michael Pelech as a hockey player, but he’s been quietly adding new lines to the ECHL record books with every Atlanta game that passes this season. Tonight against Cincinnati, he was on his game again as he rewrote the ECHL records books once more. 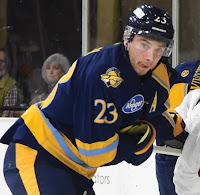 Michael Pelech started out with the Kitchener Rangers in the OHL before moving to the St. Michael’s Majors organization for his final three seasons in the OHL. His best season was his final OHL season when the big winger scored 19 goals and added 46 helpers to go along with his 121 penalty minutes. He’d hear his name called in 2009 at the NHL Entry Draft in the sixth round at 156th overall by the Los Angeles Kings, and it seemed Pelech’s future would be bright as he looked to work his way up the Kings’ depth chart. He’d be assigned to the ECHL’s Ontario Reign where his professional career got started.

Over the next twelve seasons before landing in Atlanta, it seemed that Pelech could never find that stroke of luck or the moment of greatness to push him up a depth chart that he needed. Over those twelve seasons, Pelech would appear in just 35 AHL games without ever suiting up for an NHL game. Part of that might be due to the fact that he only cracked 20 goals twice in that time, but Pelech’s gift is playmaking where he recorded 30-or-more assists eight times over those twelve seasons.

Because he’s spent a large chunk of time in the ECHL, you can probably figure out why he’s been able to write his name into the record books. The first big achievement we saw Pelech reach this season was back on December 17 when he skated in his 790th ECHL game against the Florida Everblades. That number would move him into second-place all-time in ECHL games played, just 69 back of all-time career leader Sam Ftorek. The linked article also mentions,

“The 32-year-old ranks third in ECHL history with 406 assists, trailing only Louis Dumont (566) and Chris Valicevic (460). Pelech is 10th in ECHL history with 589 career points, and needs 11 points to become just the eighth player in League history to reach the 600-point plateau. “

As I stated above, the assists were piling up quickly for Pelech as he sat in third-place all-time in helpers in December. One had to wonder how long it would take for him to tally those eleven points to hit the 600-point mark, but it seemed like he would not need long to do it.

It would take all of three weeks for Pelech to hit the mark. Yes, the holiday break slowed him down, but the 32 year-old winger scored a goal and an assist to hit 600 ECHL points in his career on January 8, 2022 in a 3-1 win over the Greenville Swamp Rabbits, making him the eighth player to hit that mark while passing Phil Berger to move into eighth all-time. Not a bad night, I’d say.

Pelech would continue to move up the career point totals as he passed Wes Goldie (605) before landing in a tie for sixth-place all-time with Sheldon Gorski (608) after Pelech scored a pair of assists in the 5-2 win over the Jacksonville Icemen on January 30. With no points in three games against the Norfolk Admirals, Pelech entered tonight’s game against Cincinnati still sitting on 608, three backs from Chris Valicevic’s total of 611 points for fifth all-time in ECHL history.

A helper on Sanghoon Shin’s goal at 5:36 of the first period moved him into sole possession of sixth-place on the all-time scoring list. Pelech would record another assist on Xavier Bernard’s power-play goal at 4:49 of the second period to put him one point back from Valicevic. And a third assist on the night on Elijah Vilio’s marker at 12:26 of the second period moved Pelech into a tie with Valicevic for the fifth-most points all-time in ECHL history! How cool is that?

The next player that Pelech has a shot at tracking down on the list is Trevor Jobe who sits 24 points ahead of both Pelech and Valicevic. He also sits 39 assists back of Valicevic on the all-time assists leaderboard, but that one may not be achievable this season. Regardless of those two numbers, it would appear that Michael Pelech will be back for another season in the ECHL thanks to having some youth on his side still, so anyone who sits ahead of him in the record books should keep an eye on him!

When people say there is no hockey history in Atlanta, talk about Michael Pelech setting these ECHL marks. He has not been in the city for very long in terms of his career, but he’s setting a pile of new marks that others will chase down one day. It’s important to remember that not all hockey history has to be NHL history, and it’s pretty clear that Atlanta has a deep and rich history of which Michael Pelech is a part.