The NFL Widens Its Footprint in the Los Angeles Media World 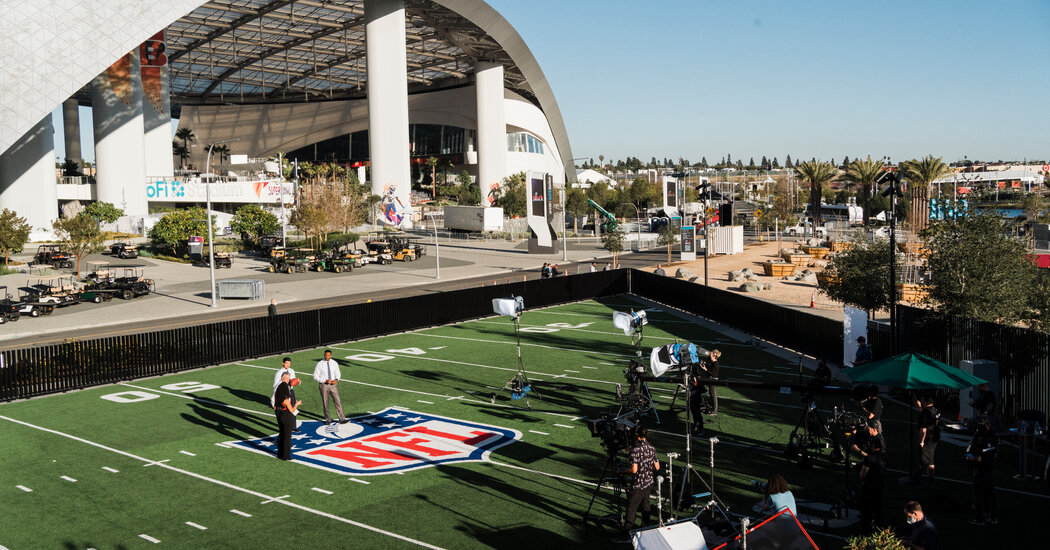 LOS ANGELES – The former West Coast headquarters for the NFL, the most popular North American professional sports league, was tucked away in Culver City, Calif., a residential Los Angeles suburb, and its neighbors included a mosque, an assisted-living facility and an elementary school.

A window on one side of the building is spattered with cracks, and drivers passing by could miss the NFL Network branding near the entrance because a palm tree partially covers the logo. Inside, the broadcast audio technology was so outdated that employees needed to order parts from eBay because suppliers no longer sold them. The building housed the NFL Network but was not suited to it long-term.

“It was a retrofit job from Day 1,” David Jurenka, senior vice president of NFL Media, said in an interview.

The league’s new West Coast office and its glitzier setting reflect the NFL’s ambition to be a player in the Los Angeles entertainment scene. The multimillion dollar facility, which opened last year, stands just 50 yards away from SoFi Stadium, the $ 5 billion venue in Inglewood, Calif., Built by the Los Angeles Rams owner E. Stanley Kroenke, and will be surrounded by restaurants and retailers after the remodeled Hollywood Park development is completed.

The NFL’s renewed investment in the Los Angeles market is part of its larger media strategy. After signing media rights deals worth over $ 100 billion last spring, the league expanded its regular season to 17 games from 16 and ratings skyrocketed as fans reveled in thrillingly close games. The season culminates Sunday with the Super Bowlfeaturing the Rams playing in their home stadium against the Cincinnati Bengals.

The sports and cultural spectacle foreshadows big-money deals yet to come.

“Los Angeles gives you star power,” said Daniel Durbin, a communications professor at the University of Southern California, “and do not underestimate how valuable that is for a brand that really lives on the media.”

The NFL, whose main headquarters is on Park Avenue in New York, opened its media office in Los Angeles in 2003, but the organization was isolated from the football world because the market lacked a team. Jurenka said the league scouted other sites in the city before the Rams and Chargers relocated to Los Angeles in 2016, but said Kroenke’s idea to build the new home near his Inglewood stadium made the most sense.

The headquarters was completed just before the start of the season, and houses more than 400 employees. The NFL embedded 10 of its New York-based departments, from human resources to football operations, in the building. Though the office’s main purpose is to anchor the media hub, the league intentionally branded it with National Football League wording rather than NFL Network, as it did in Culver City.

The facility is 205,000 square feet, about 30,000 square feet larger than the old building, and features five stages, a podcast studio and an outdoor on-air area with the stadium as the backdrop. The proximity to the stadium gives league executives and brass from visiting teams a natural meeting place and can help recruit new employees to Los Angeles.

The homes of some of the leagues’ largest media partners, like Disney and Fox Sports, are nearby, which Durbin said should help the NFL broaden its collaborative footprint.

“As long as it’s in New York, the West Coast sees that as five hours, 3,000 miles,” Durbin said. “The media has figured out that LA is an important ground and increasing your profile here and being where the action is is the smartest thing you could possibly do.”

Television deals, not sales of tickets or merchandise, generate the largest share of the league’s revenue. Last March, the NFL negotiated new agreements with NBC, CBS, ESPN, Fox and Amazon collectively worth about $ 110 billion over 11 years, nearly doubling the value of its previous contracts. The new office had not been completed during those talks, but Hans Schroeder, the executive vice president and chief operating officer of NFL Media, said he believed the NFL’s investment brought “credibility and importance” to the discussions.

The deals take effect in 2023, but 2021 gives the partners reason for optimism. After the regular season was expanded, ratings for the NFL playoffs spiked. Nearly 50 million television and digital viewers watched conference championship games, a 10 percent increase from the previous year, according to the NFL That is significant considering that ratings for other major broadcasts like the Olympics and the Academy Awards trended downward last year and viewers have an ever-expanding menu of entertainment options.

“The fact that the NFL has gained viewership over the last year in this environment is downright stunning,” said Andrew Billings, a communications professor at the University of Alabama. “We’re all watching something different at different times, but the NFL remains appointment viewing.”

Schroeder credits the drama of the regular season – 34 games were decided by a game-winning score, the most in NFL history – for stirring interest in the playoffs. The league also experimented with new ways to broadcast games. ESPN debuted a Monday Night Football game during the wild-card round, and CBS aired for the second consecutive season special Nickelodeon broadcast for children.

The Rams’ Super Bowl run should benefit the entire league, Durbin said. Sixty-four percent of Los Angeles households watched their NFC Championship victory, according to Nielsen, showing that the team has rebuilt its fan base since its return from St. Louis. Louis. Its success is an asset to the entire NFL, Durbin said, noting how the Lakers and Dodgers’ successes boosted the popularity of the NBA and Major League Baseball.

NFL executives said it was too early to discuss the potential of an 18th regular season game, but the off-season calendar seems to grow annually. The draft and the scouting combine have become made-for-TV events, pumped with a heightened sense of theater.

“They’ve shown that there’s just more hours that need to be programmed outside of the actual game, and the NFL is ready and willing to produce it,” Billings said. “People will consume their product.”

The league continues to explore streaming deals as a way to make money and build audiences. Starting next season, Amazon Prime will solely air “Thursday Night Football” games. The bidding will also open for NFL Sunday Ticket, the service that allows viewers to watch out-of-market games, when DirecTV’s contract expires after the 2022-23 season.

Brian Rolapp, the league’s chief media and business officer, said he was excited about the potential to expand NFL Films, the in-house documentary producers of “Hard Knocks” for HBO. The new stronghold in Los Angeles has attracted interest from Hollywood studios and streaming companies that want to add NFL Films content to their offerings, Rolapp said.

As the league celebrates a successful season in its version of Manifest Destiny, Rolapp said it raises the bar for new goals.

“We have a saying around here that only the paranoid survive, and I think we do not take anything for granted,” Rolapp said. “While we’re proud of what we’ve accomplished and what you’ll see in the Super Bowl in LA, the next day we’ll be right back to work trying to make it better.”

Alexander Zverev continued the quest for his first title of the...
Read more
GOLF

ARDMORE, PA - Emilia Migliaccio has enjoyed being a NARP. For those not in the know, that acronym stands for non-athletic regular person and...
Read more
Sports