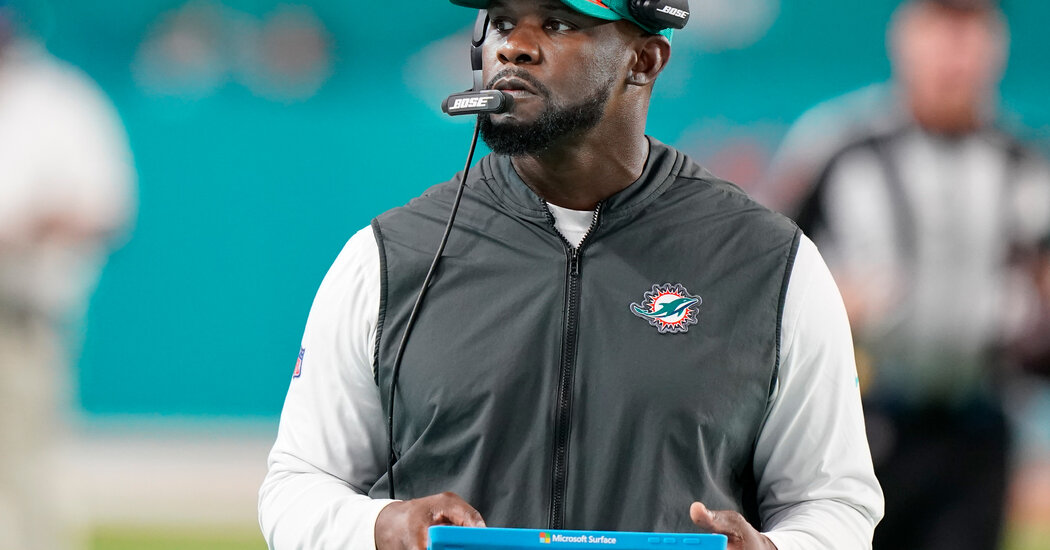 Second and even third chances are not that unusual for NFL head coaches. Over their careers, several coaches have run three different teams, and most of them had only mixed records of success before getting the third job. If they had excelled in one of the earlier two jobs, after all, they might have still had it.

Football fans might notice something about that list: All the coaches on it are white. No Black man has ever been the head coach of three NFL teams. (Romeo Crennel is the closest, having been the coach of two teams and the interim coach of a third team, for part of a season.)

But there are certainly Black coaches whose records resemble those of the white coaches who have had multiple coaching chances. Jim Caldwell, Marvin Lewis, Anthony Lynn, Lovie Smith and, in an earlier era, Dennis Green and Art Shell all won more games than they lost and took teams to the playoffs. They never got a third chance or, in some cases, a second chance to be a head coach.

Brian Flores seemed as if he might be following this path. Three years ago, he took over the Miami Dolphins, after the team had only one winning season in the previous 10. Under Flores, Miami had a winning record each of the past two years, coming close to the playoffs both times. Still, the Dolphins fired him last month, and no other team has hired him.

On Tuesday, Flores sued the NFL for racial discrimination. It was a remarkable act of defiance: Flores is only 40 years old, and he is probably hurting his chances of getting another job in the insular, conservative NFL – which also happens to be arguably the country’s most popular form of entertainment.

Robert Griffin III, a former quarterback, tweeted: “Brian Flores effectively had to end his chances at coaching in the NFL to point out what we already know about discrimination in the hiring process for head coaches in the NFL.”

The details of the lawsuit read like something out of a television drama. They include screenshots of an alleged text exchange last month in which Bill Belichick, the league’s most successful coach, mistakenly congratulated Flores on getting the job as the head coach of the New York Giants. (Belichick has not confirmed that the exchange happened.)

Flores believes that Belichick meant to send the text to a different coach named Brian – Brian Daboll, who is white. Flores said that when he received the text, he was preparing for his own interview with the Giants. When he realized the text was not intended for him, he understood that Giants executives had already chosen somebody else.

Why might the Giants have wanted to interview Flores after having decided to hire Daboll? The NFL requires every team to interview at least one nonwhite candidate for any head coaching job. By conducting a pro forma interview with Flores, the Giants would have been technically following the rule.

Lewis, the former coach of the Cincinnati Bengals, said yesterday that he once had a sham interview with the Carolina Panthers. Lewis said they had already decided to hire Fox – one of the white coaches who would eventually run three different teams.

Finding ironclad proof of racial discrimination is rarely easy, especially in an individual case. And not every allegation of racism is accurate or fair. But the evidence that the NFL has engaged in a pattern of discrimination against Black coaches is strong:

The Times has broken several stories on emails among prominent NFL figures – involving racist remarks from Jon Gruden, a longtime coach; and a joke by the NFL’s top lawyer that outreach to Latino fans would be less relevant after the construction of a border wall.

A programming note: Starting this weekend, The Morning expands to seven days a week. Melissa Kirsch will write on Saturdays about culture and German Lopez on Sundays about big stories and ideas.

There was a slip of time in Hollywood, between the silent era and the summer of 1934, when actresses embodied roles with ahead-of-their-time understandings of womanhood, going beyond the stereotypes of vamp or ingénue. It was before the Production Code Administration, which imposed strict censorship, “began to put a stranglehold on the industry,” Beatrice Loayza writes in The Times.

Pre-Code films were not more risqué out of a desire to be progressive, but rather to “draw in Depression-era audiences with sheer titillation,” Loayza writes. Still, that often led to more complex female characters, as in the 1931 drama “Bad Girl.” After the character Dorothy (Sally Eilers) stays at a man’s place until 4 am, her brother kicks her out of the apartment they share. Her brother’s girlfriend, Edna (Minna Gombell), a single mother, proceeds to dump him and take Dorothy under her wing.

These characters “were not only more sexually liberated than their Code-bound successors, they were also unapologetically independent and skeptical or outright dismissive of norms and institutions like marriage in ways that went unpunished,” Loayza writes.

If you’re in New York: A film series at the Museum of Modern Art is screening some of these pre-Code titles.

The pangrams from yesterday’s Spelling Bee were compile and polemic. Here is today’s puzzle – or you can play online.

If you’re in the mood to play more, find all our games here.

Sean Johnson has joined the USMNT camp for the June fixtures, replacing the leaving Zack Steffen who was forced to withdraw...
Read more
NBA

The 2022 US PGA Championship arrives at Southern Hills in Minnesota and FoxSports and Kayo have the live broadcast.https://www.youtube.com/watch?v=QBvNzsgxSm4Eight Australians including Adam Scott,...
Read more
Load more