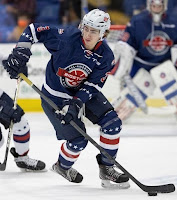 Since 2012, USA Hockey has co-sponsored an annual game featuring the top American-born players eligible for the subsequent NHL Draft. The All-American Prospects Game (AAPG) has consistently featured dozens of players selected in the NHL Draft held the following summer. The inaugural event, called the CCM / USA Hockey All-American Prospects Game, featured 23 players drafted in the 2013 Entry Draft, including 3 first-rounders. Last year’s AAPG, played in April 2021, included 24 players subsequently drafted in June. Four of these players were drafted in the 1st Round.

The 2022 BioSteel All-American Prospects Game was held last Monday at the USA Hockey Arena in Plymouth, Michigan and was broadcast live on NHL Network. For the 44 American-born prospects, it was a golden opportunity to make an impression on the over 210 NHL scouts in attendance. Two UNH commits – Damien Carfagna from Wood Ridge, New Jersey and Tyler Muszelik from Long Valley, NJ – seized the opportunity and excelled.

~ DAMIEN CARFAGNA (DOB: 12/12/02) played on Team Blue’s third defensive pair and also logged minutes on the power play and penalty kill. Overall, he posted 2 shots on goal, 0 penalty minutes, and a +/- rating of +3. In the 3-on-3 overtime, Carfagna created the most memorable play of the game.

With 2:43 remaining, Carfagna blocked a shot at the top of the slot and the puck bounced off the sidewall. Jack Harvey, a forward for the Chicago Steel and a Boston University commit, passed the puck back to Carfagna just inside their own blueline and he took it from there.

Carfagna carried the puck through the neutral zone with Cutter Gauthier, the leading goal scorer for the USNTDP U-18 team and a Boston College commit, joining the rush on the right wing. This created a 2-on-1 break. Carfagna cruised into the right faceoff circle and ripped a wrist shot over the goalie’s blocker for the game-winner. Here’s a video of the entire play:

So far this season, Damien Carfagna has scored 4 goals and 28 assists in 29 games with the Green Bay Gamblers. He has the most assists among all USHL defensemen and second most points. He is on track to enroll at UNH in Fall 2022.

This is the second year Carfagna has been eligible for the draft. In my article “Will UNH Commit (s) Be Selected in 2021 NHL Entry Draft?” last July, I speculated that Carfagna was a possible late 7th round pick but “may need one more season to demonstrate excellence”. He has certainly upped his offensive game this season – he increased assists from 12 (last season) to 26 (to date this season) and power play assists from 1 to 11. Based on his improved play with the Gamblers and outstanding performance in the BioSteel All-American Prospects game, I’d say Carfagna has a very good chance of being drafted in the late rounds of the 2022 NHL Draft.

~ TYLER MUSZELIK (DOB: 7/1/04) was the starting goalie for Team White and played the entire first period and the first 10 minutes of the second period. He faced 13 shots on goal and made a save on each of them. Muszelik became the 6th goalie in the history of the AAPG to stop every shot that he faced. Here are some video highlights of his shutout performance:

Over the course of the 2021-22 season, the NTDP U-18 team will play 15 exhibition games against NCAA Division 1 teams and 4 against Division 3 schools. To date, Muszelik has played in 9 of these NCAA games and has a 6-2-0 record with a 2.93 GAA and .904 Save%. High points have included 4-3 wins against Notre Dame and Boston University and a 2-0 shutout of North Dakota. Like Carfagna, Tyler Muszelik is on track to enroll at UNH in Fall 2022.

On January 12th, the NHL Central Scouting Service announced it’s MidTerm Rankings for the 2022 NHL Draft. Tyler Muszelik was the 5th ranked North American goalie. Historically, a midterm rank that high is usually followed by that goalie being drafted by an NHL team. UNH’s current goalie, Mike Robinson from Bedford, NH, was selected by the San Jose Sharks in Round 3 (86th Overall) of the 2015 NHL Draft.

The statistics for the commits, presented in the above table, are categorized by the projected year they will enroll in UNH. For example, the “2022 Commits” are projected to start playing for UNH in the Fall of 2022. I have based these projections on the following factors:
~ Number of UNH players leaving the team at the end of the previous season and the position they played.
~ If a National Letter of Intent has been signed.
~ The year the commit and UNH coaches originally targeted for enrollment in UNH.
~ How old the commit would be upon admission.
~ Number of years in junior hockey prior to admission.
~ The commit’s performance in recent seasons as well as injuries.
~ Anticipated date of high school graduation.

WASHINGTON, DC - MARCH 04: Kyle Kuzma # 33 of the Washington Wizards in action against John Collins # 20 of the Atlanta...
Read more
GOLF

By Jason PowellProWrestling.net Editor (@prowrestlingnet) -It's Independence Day in the United States. Barring any breaking news, I will be taking the day off,...
Read more
Load more