The Whole Story Behind The Greatest Goal Ever Scored 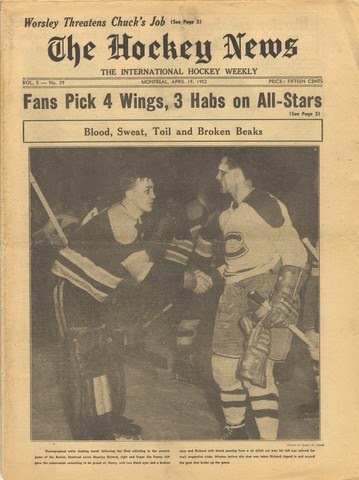 It is one of the most famous photos in hockey history. Sugar Jim Henry (so called since infancy because his mother would dip his pacifier in sugar) silently shaking the hand of the dazed and confused Rocket Richard, who had just beat the goaltender for the playoff series winning goal despite being semi conscious.

That much of the story is Stanley Cup lore. But for the whole story, lets check in on Andy O’Brien’s 1961 book “Rocket Richard.” 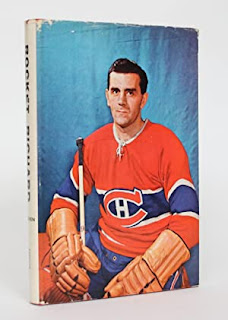 “On the night of April 8, 1952, in the seventh game of a bruising Stanley Cup semi-final series, the Rocket was knocked into deep freeze on the same Forum ice. After an express train collision with Leo Labine, followed by a head long plunge into defenseman Bill Quackenbush’s knee, Richard’s head twisted so violently to the right and he lay so utterly motionless after crashing on the ice that, from the press box, we though neck was broken.

“Blood was flowing freely from a deep cut on his forehead and there was a reddish blot on his right cheek as he was carried off.

“He did not move an eyelid,” recalls physiotherapist Bill Head, “all the time the doctor worked at putting in six stitches. It happened in the second period and he came around slowly. Finally in the third period – despite our protests – he got up and, at a whistle break, skated back to the Canadiens bench. “

“Richard sat there, apparently not quite sure where he was. He stared long at the clock, his eyes failing to focus. Elmer Lach told him it was four minutes to go and the score was tied 1-1. Almost certainly the next goal would win the semi-final series.

Not without misgivings, Irvin gave him the nod. Then came what’s still ranked the greatest goal ever scored in Stanley Cup play – towering even above all the other 81 Richardian goals scored in a total of 133 playoff games in hockey’s big time.

He made it on an end to end rush in which he actually went through or around the entire Boston Bruins hockey club.

“Rocket picked up a pass from Canadien defenceman Butch Bouchard beside his own net and ducked by a forechecker, veering toward center ice. In four strides he eluded the other winger who had cut in sharply. He veered right, away from the Boston center’s reaching poke check.

“Over the Boston blue line, defenseman Bob Armstrong and Quackenbush were skating backwards. Richard tried to circle Quackenbush, but the cagey veteran rode him off angle almost to the boards. Richard was still in high gear, however, shoving Quackenbush aside with his left arm, he switched in sharply toward the Boston goal mouth. Unable to wait, Armstrong surged forward. Richard button-hooked around and swooped in on the frantic goalie, Sugar Jim Henry, who was squinting through a mess of a face that had suffered a broken nose and two black eyes earlier in the game.

“There were a flurry of sticks, Henry dove, Richard pulled the aside and blasted the netting with his very last ounce of strength.

“The chaos in the rink was unbelievable. Richard was mobbed by the players but skated bleakly to the bench and sat brooding. The game ended with a 2-1 decision, and entry into the finals for Canadiens. An immortal photograph was shot as Richard and Henry, looking like the two sole survivors of a head-on highway crash, stood shaking hands – without exchanging a word.

“Richard was surrounded by ushers and police on his way into the dressing room where he sank down, breathing deeply, not even smiling as the team and sport scribes whooped it up like crazy kids. Senator Donat Raymond, then president of the team, made one of his infrequent visits to the room, pushed me aside, sat down beside the Rocket, put out his hand and said “Well down, Maurice.”

“At that the Rocket broke into a wild, sobbing convulsion. Silence fell abruptly as several players rushed to lift him on to a rubbing table. Some tried to hold down the quivering legs, others the thrashing arms. The Rocket’s retching sobs scared us stiff As Dr. Gordon Young rushed up with a hypodermic needle, teammates tore off the Rocket’s sweater and pulled up the underwear sleeve; the needle was inserted and as the players held on the sobs gradually slowed and ceased. It was almost two hours before the Rocket recovered enough to leave. “

Box Score The Brewers dropped the third game of the series against the Pirates on Saturday afternoon, losing 7-4 as Aaron Ashby...
Read more
Technology

It looks like there is no stopping Roon from expanding its reach. After announcing an online store and 40 new partner devices...
Read more
NBA

Sudbury, ON - As theis 2022 Championship season continues along, we are ecstatic to welcome the 100th year of the Ontario...
Read more
Load more