Things to do in Comacchio, Emilia-Romagna’s Little Venice 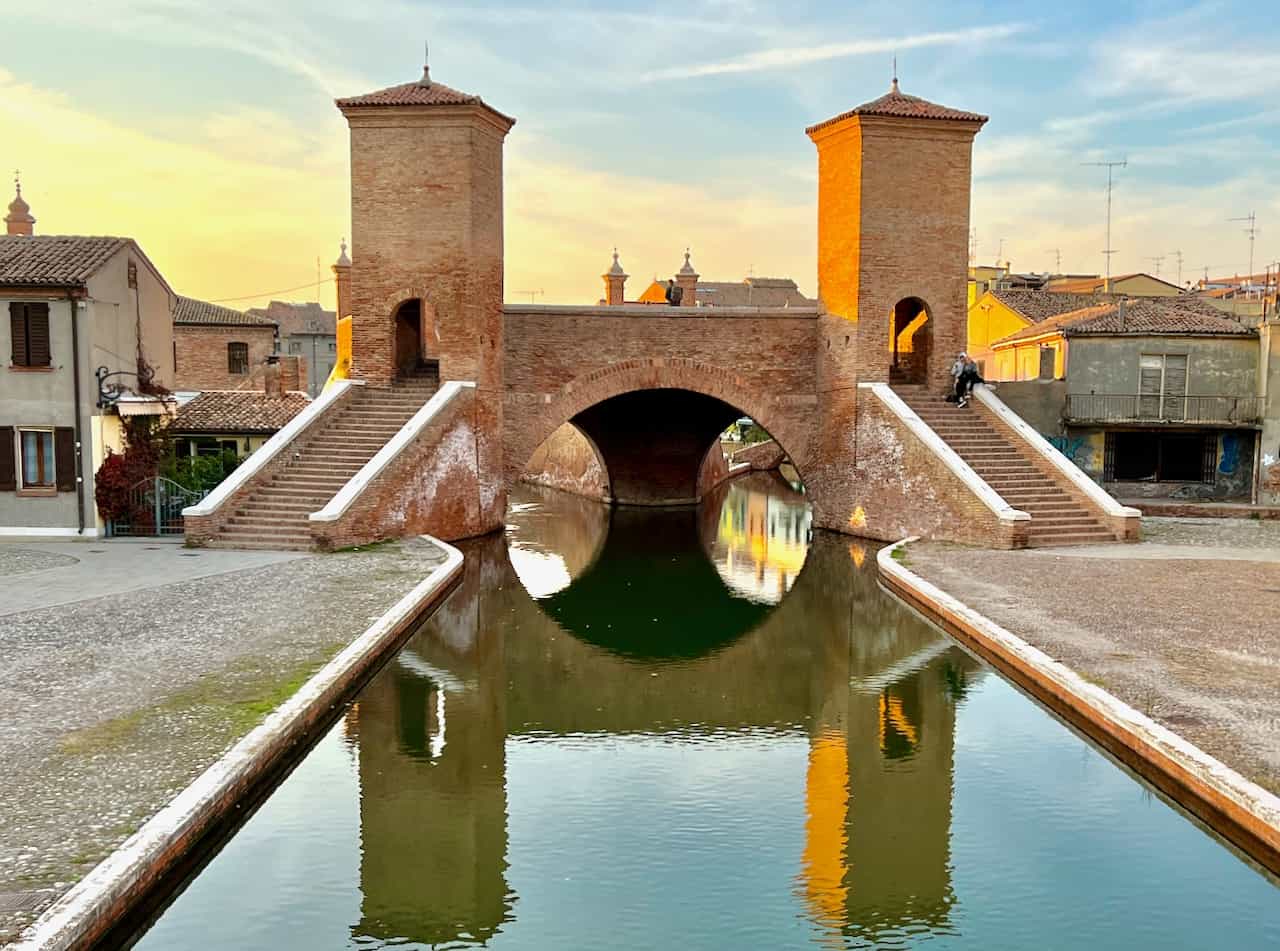 Comacchio is a small town tucked away in the eastern corner of Emilia-Romagna, a region in northern Italy (map). Built on 13 islands at the edge of a lagoon, Comacchio is dissected by canals and connected by bridges. With a history going back 2,000 years, Comacchio is often called the ‘Little Venice’ of Emilia-Romagna. Lacking the grandeur of Venice, Comacchio certainly makes up for it with its timeless charm. Indeed, one of the best things to do in Comacchio is to simply wander along its gorgeous canals lined by colorful houses, enjoy the reflections in the serene waters and admire the beautiful bridges. Read further to discover other things to do in Comacchio – I’ve also included a walking route.

I visited the town briefly some years ago but the rain prevented me from truly appreciating its beauty. When I planned my Emilia-Romagna road trip, I was sure to include Comacchio in my itinerary! This time around, I was greeted with blue skies upon my arrival. I dropped my bag in the hotel and dashed out to see the town just as the sun was setting. Comacchio did not disappoint. In the soft glow of the setting sun, Comacchio looked absolutely resplendent!

I spent 1.5 days exploring Comacchio and simply fell in love with its charming old town. Here are eight suggestions for things to do in Comacchio to truly appreciate this wonderful gem of a place!

1. Wander around the canals

This simply is the best way to soak up the charms of Comacchio! In the map below, you’ll find a suggested walking route along the canals and bridges of Comacchio, as well as several other places of interest in Comacchio and its surroundings.

Start your walking tour at the Loggia del Grano (point A) in the center of the old town and head south along Via Edgardo Fogli towards the Ponte degli Sbirri, then follow the route.

Some of the most picturesque canals include Via Cavour, Via Edgardo Fogli and Via della Pescheria.

As you stroll along the canals, some of the bridges to look out for include the 17th century Ponte dei Treppontia Comacchio icon, with its two towers and five staircases, and the L-shaped Sbirri Bridgewhich offers great views all around.

You’ll pass a variety of historic monuments during your wander around Comacchio, such as the Loggia del Grano (an old grain warehouse), the adjacent Clock Towerthe elegant 19th century Bellini Palacewhich houses a library and art gallery, and churches such as the Cathedral, Chiesa Santo Rosario and Chiesa del Carmine. An interesting museum to visit is the Museo Delta Anticoan archeological museum that showcases an ancient Roman boat.

Just a short stroll from the old town, do not miss the Loggiato dei Cappuccinia 17th century, 400 meter-long arcade with 143 columns that connects the town with the Sanctuary of Santa Maria in Aula Regia. Behind it, you’ll find another of Comacchio’s attractions: Marinati Manifattura (see below).

After your walk, I recommend finding a canal-side café to sit at and enjoy a well-deserved drink! In the late-afternoons, join the locals for an aperitivo (Italian ‘happy hour’) with drinks and canapés.

With its location in the delta of the Po River, Italy’s longest river, proximity to the Adriatic Sea, and a centuries-old fishing tradition, Comacchio is a terrific place for lovers of seafood. It’s particularly famous in Italy for its eels which thrive in the waters around Comacchio. The methods used to capture and prepare the eels have hardly changed over the centuries. Restaurants where you can try the local seafood include Antica Trattoria La Barcaccia, Trattoria della Pescheria and Vasco e Giulia.

Learn about the fishing traditions

Just outside the old town lies the Marinati Manifattura, an old fish marinating factory that’s now a museum. This factory was made famous in a 1950’s movie starring Sophia Loren. As you walk around the museum, you’ll learn about the age-old tradition of catching and marinating eels, and you’ll quickly notice the many images of Italy’s most iconic movie star!

Comacchio is surrounded by waters rich with fish, clams and eels. A visit to one of the many fishing huts or fishing boat outside Comacchio provides wonderful insights into how the fish are caught. These traditional huts, perched on stilts over the water with large nets hanging on one side, provide the fishermen with shelter and storage space for their equipment.

The Po River Delta, the second-largest wetland in Europe, is an area of ​​lagoons, forests, marshes, salt pans and dunes. Rich with wildlife, especially birds, a large part of the delta is a protected national park and designated as a UNESCO World Heritage site. Bird-watching is a popular activity but visitors can also enjoy the hiking trails, scenic boat rides or horseback riding.

Comacchio is one of the places you should not miss in Emilia Romagna! Close to other historic cities such as Ravenna and Ferrara (both less than an hour away), Comacchio is easy to include in an Emilia Romagna itinerary. I recommend spending a night there to soak up the wonderful atmosphere.

How to get to Comacchio

The easiest way to get to Comacchio is by car. The town is about a 1.5 hour drive from Bologna (via Ferrara). If you’re driving, beware that the historic center is a restricted area for unregistered vehicles. Leave your car in one of the parking lots outside the restricted area, such as the Area di Parcheggio Canale Lombardo.

There are also frequent buses from Ferrara and Ravenna with TPER.

Where to stay in Comacchio

There are various hotels and inns in the historic town center. I stayed at Villa Cavour, situated on the gorgeous Via Cavour canal. Located in a manor house, Villa Cavour has clean, spacious rooms, some of which have beautiful canal views. Search for Hotels around Comacchio (Booking.com).

Note: my tip to Comacchio was part of the Art Cities of Emilia Romagna road trip, a collaboration between iambassador and Emilia Romagna Tourism. As always, all views mentioned above are mine, and mine only.

The Cougars de Montigny and the Rouen Huskies both swept weekend series to remain tied atop Pool A, while MUC Barracudas traveled to...
Read more
NFL