Home Travel Things to do in Montpellier, France
Travel

Things to do in Montpellier, France 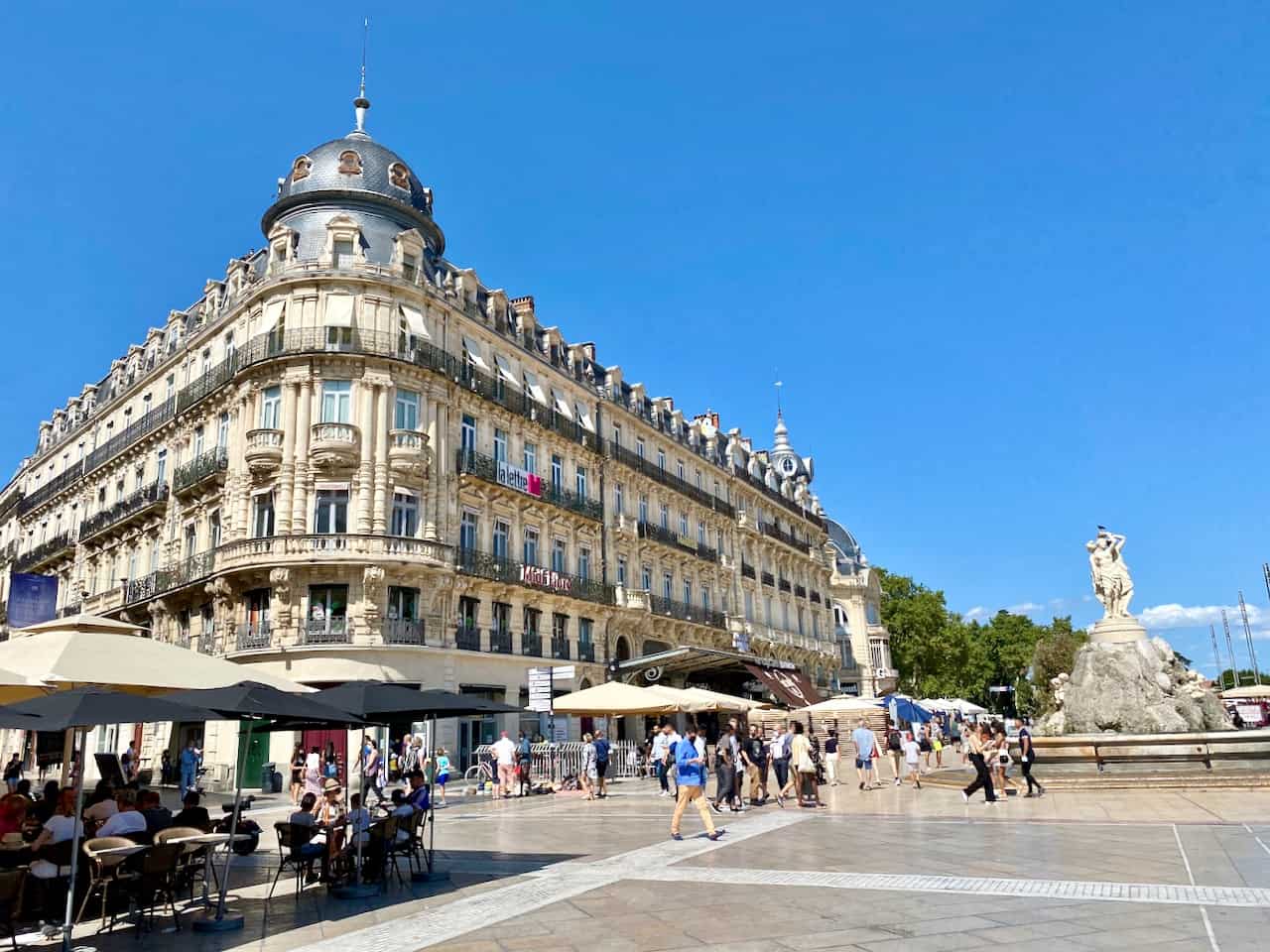 Montpellier is the seventh-largest city in France and is located in the department of Hérault in the Occitanie region of southern France (map). Montpellier has the distinction of being the home to one of the oldest universities in the world (established in 1220) and one of the oldest medical schools (with prominent alumni such as Nostradamus). Today, students make up about a quarter of the population (!), Making Montpellier a youthful and vibrant city, with a splendid mix of old and new. I’ve visited the city several times now and discovered many things to do in Montpellier.

There’s lots to discover such as the charming medieval town, impressive modern architecture, picturesque neighborhoods, striking street art and an exciting culinary scene. Just outside the city, you’ll find endless beaches, the wineries of the Languedoc region, medieval towns and nature parks. Due to its wonderful diversity of attractions, Montpellier is absolutely worth visiting, also as a city break destination. Here are my recommendations for things to do and see in Montpellier:

The best way to get acquainted with Montpellier is to simply wander around the largely pedestrianized medieval town. Start at either end of town (Place de la Comédie or Arc de Triomphe) and make your way to the other end via the maze of atmospheric cobbled street and lanes. Along the way, you’ll stumble upon quiet lanes, lively squares, historic monuments, grand 18th century mansions, gorgeous Renaissance architecture, boutiques, cafes and restaurants.

While you wander around, look out for cool street art, in particular the fish! I do not know the story behind it but depictions of different varieties of fish are scattered throughout the old town.

The Place Royale du Peyrou (or Promenade du Peyrou) is a popular spot for locals. In its center is a statue of Louis XIV on horseback and at the far end is the beautiful Château d’Eau and the Aqueduc Saint-Clément. On Sundays, there’s a lively antique market with food trucks.

The most iconic monument in the old town is arguably the imposing Cathedral of St. Pierre. This 16th century cathedral, with its two circular towers, is certainly an impressive sight.

Place de la Comédie is the main hub of Montpellier and one of the largest squares in Europe. At one end, the Opera Comédie stands majestically and at the other end lies the leafy Charles de Gaulle park. It’s a vibrant square lined by stunning Renaissance buildings and a plethora of cafes and restaurants. Stop here for a drink and indulge in some people-watching!

The Jardin des Plantes, founded in 1593, is the oldest botanical garden in France. It’s a great place for a cool respite in the summer, and do not miss the huge lotus flowers!

Just off the Place de la Comédie is the Musée Fabre, a world class museum that houses an impressive fine art collection.

Saint Roch is my favorite neighborhood in Montpellier. Adjacent to the old town, this neighborhood has a wonderfully laid-back ambiance. There are many cafes, restaurants and shops to browse around, and it’s packed with cool street art!

After several visits, I can easily say that Montpellier is one of my favorite street art cities in the world. There’s quite literally something to see around every corner, from the many types of fish (mentioned above) to beautiful portraits, Banksy-like illustrations and large trompe-l’oeil murals. There’s plenty of street art to be found in the old town but you’ll find much more in the Saint Roch, Verdanson and Rondelet districts. Read more about street art in Montpellier.

Completed in 2019, the L’Arbre Blanc is a 17-storey residential tower on the edge of the city center. Designed by Sou Fujimoto, this tower is modeled in the shape of a tree with cantilevering balconies representing branches.

It’s a real treat to see this extraordinary building, especially for fans of modern architecture. There’s also a restaurant and bar on the rooftop where you have great views across the city.

10. Head for the beaches

A chain of lagoons and lakes separates Montpellier from the Mediterranean Sea. Cross these and you’ll find miles of beaches. Some of the most popular beaches near Montpellier include Le Petit Traverse and Grand Traverse, Palavas-les-Flots, Maguelone and Carnon. There’s no shortage of beach clubs and restaurants along the coast for cocktails and meals. Some of the cool ones I’ve visited include Bonaventure (Maguelone), Paillote Bambou and White Beach (both at Le Grand Traverse). In my opinion, the best beach is at Espiguette, with its miles of sand and crystal-clear water (it’s a wild beach though with few facilities).

As you head for the beaches, look out for the flamingos in the lagoons and the pink salt pans near Espiguette.

Montpellier lies in the heart of the Languedoc wine region so you can not miss venturing out to some of the nearby wineries. If you do not have your own transportation, I recommend joining a tour (which also means you do not have to worry about drinking and driving).

Some of the closest wineries can be found just north of the city, such as Château Montel, Domaine Pierre Clavel, Puech-Haut Castle and Haut-Lirou.

Occitanie is a fabulous region to explore! From beautiful coastal towns to medieval villages in the hills, pink salt pans, fortified towns, nature parks, lakes and countless vineyards, there’s a lot to do around Montpellier. Here are several suggestions for day trips from Montpellier:

This large lake, about 45 minutes drive west of Montpellier (map), is perfect for kayaking or just lazing on one of the many pebble beaches. The water is cool and crystal clear. There are various places to have a meal such as Guinguette du Relais Nautique and Auberge du Lac, both with great lake views. Or drop by in the village of Octon for a drink or meal.

This medieval village, located in a narrow gorge, is considered to be one of the most beautiful in France. It’s most famous for its Abbey of Gellone, along with the nearby Pont du Diable, a UNESCO World Heritage site. On the way, you can also stop at the impressive Clamouse caves. Situated west of Montpellier, Saint Guilhem-le-Désert (map) can easily be combined with Lac du Salagou for a day trip. If you’re visiting during the busy summer months, plan to get there by 10am or in the late-afternoon to avoid the crowds. You can also opt for an organized day tour from Montpellier.

This medieval town is surrounded by impressive walls and towers. I recommend a stroll along the walls for views of the surrounding pink salt pans. It’s a popular place for tourists, especially in the summer, but venture away from Place Saint Louis (the main square) and you’ll find quiet streets with beautiful houses. Aigues-Mortes (map) can easily be combined with a day at the beach in Espiguette.

Other places of interest

Other places of interest within an hour from Montpellier include the towns of Sète and Pezenas (one of the most beautiful towns in the region), the Camargue National Park and the Valmagne Sainte-Marie’s Abbey.

Where to eat in Montpellier

Montpellier has a vibrant food scene, a great mix of local farm-to-table establishments and international flavors. My favorite experience was alfresco dining at Rosemarie (map) – a wonderful ambiance in the square coupled with delicious food!

Other restaurants in the old town I can recommend include La Bistrote (map), Restaurant Leclere (map) and Pastis (map).

Montpellier is connected to the French high-speed railway network, which makes it easy and fast to get there from major cities in France, Brussels and even London. The Montpellier Airport (just 10 minutes from the city) has frequent flights to major hubs in Europe. From Amsterdam, there are several flights a day to Montpellier. Find flights to Montpellier with KLM. Should you wish to explore the surrounding region, I recommend hiring a rental car at the airport.

Ric Flair teams up with Roddy Piper and NFL star Kevin Greene to take on the nWo trio of Syxx, Kevin Nash and...
Read more
Sports

Fabricio "Wonder Boy" Andrade (7-2) is hunting for his seventh consecutive victory and the next shot at the ONE bantamweight world...
Read more
BOXING