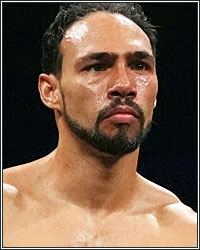 The good news is that Keith Thurman is back and he looked pretty damn sharp for a guy who had been off for more than 30 months. Having Thurman in the mix at the top of the division adds more depth to a mainstage cast that’s starting to thin out (and may hold out for as long as it can without acknowledging the existence of young stars like Jaron Ennis and Vergil Ortiz Jr.) .

Thurman has earned his shaky reputation as a guy who may not be in it for the long haul and may just be around to pick up paydays when the bank account starts to get thin. There’s a reason that, in some fans’ minds, he’s gone from “One Time” to “Sometimes” to “Once Upon a Time.” But he sure did look sharp and hungry — like, 2013-2014 sharp and hungry — on Saturday. If he’s serious about wanting to reclaim his spot at the top of the division, the division will be all the better for his existence.

Another piece of good news for welterweight boxing enthusiasts is Mario Barrios. The 26-year-old performed about as well as possible against a Thurman who was being Thurman-like. He proved that he belonged in the mix at 147. He may not ever be anything resembling an elite in the division, but he’s for sure a solid second tier guy and there are a ton of good fan-friendly bouts for him down the road.

The bad news for welterweight watchers, though, is that a serious, return-minded Keith Thurman makes for yet another obstacle to an Errol Spence-Terence Crawford unification fight. One can easily see Thurman, who’s Team PBC all the way, like Spence, being wedged into a main event slot in early 2023 against the winner of the upcoming Spence-Yordenis Ugas unification bout, whether he stays active for the rest of 2022 or not .

All in all, Saturday’s Thurman-Barrios card was really solid from top to bottom. All the fights were good and even much of the free online undercard was entertaining. I was not too blindsided, however, by the negative talk on social media from some fans who were somehow insisting that a good fight was NOT good.

I think a lot of people got nudged into shitting on Thurman-Barrios because of all the bad publicity it got from its $ 75 PPV price tag — and Lord knows boxing fans are absolutely the most easily suggestible fans in the entire sporting world. Personally, I do not give a rat’s ass who paid for what or what price was being asked for what. I’m just a boxing guy, not a businessman. Bottom line, this was a well-matched fight that delivered on its promise. It was never going to be Gatti-Ward, but it was a good comeback contest for both guys and they both performed as well as could reasonably be expected.

Now, it’s long been my take that paywalls (of any type) are bad for the long-term health of the sport — and it would’ve been nice to put this Saturday’s fights in front of more eyeballs– but that has nothing to do with the fights, themselves. Good is good. A good steak is a good steak, whether it costs $ 5 or $ 50. Unless you have a personal stake in the business, Thurman-Barrios, the fight, should be a separate issue from Thurman-Barrios, the consumer product.

At any rate, Thurman is back least at least for now.

– Late last week, news came that an opponent had been found for Ryan Garcia’s comeback fight, tentatively scheduled for April 9 (and I say “tentatively” because all scheduled fights with Garcia are tentative until opening bell). That opponent, despite Golden Boy and Garcia teasing that “something special” was in the works, is the very NOT special Emmanuel Tagoe.

Maybe I’m being too harsh on the solid, but very inactive Ghanian (who’s only fought once since July of 2019 and will be coming into the Garcia fight after 17 months of inactivity). I also realize that Garcia is, himself, coming off a long stretch of inactivity and needs a bit of a tune-up fight. But after Garcia has spent the better part of two years tying himself to bouts with guys like Manny Pacquiao and Gervonta Davis, getting Tagoe is like being promised a Playstation 5 for Christmas and getting a GameStation from the Korean electronics store around the corner, instead.

Kudos to Garcia, by the way, for some honesty in admitting that one of the biggest hurdles to getting a fight is his own unreliability in keeping a fight date:

“I wanna thank Emmanuel tagoe for taking this fight,” Garcia wrote via social media. “No one wanted to fight me bc they assumed I would not fight… I respect you and let’s give everyone a fight.”

“I did nearly 600 episodes of the Next Round podcast and webcast with Steve Kim … I worked with him for nine years, longer than anyone professionally has … I started out as a co-host on the webcast and then, when we became a live cast on Blog Talk, I became the producer and co-host of the show… and I ended the show in 2018 when I could not stand idly by, put Steve on the air, and see the things he was Tweeting about the death of Stephon Clark and just other things. We had just grown apart. I never said that publicly, but that’s why I ended the show. There were other reasons around it [sic]maybe some straws that broke the camel’s back, but the bottom line was that we had conversations and I was tired of putting a racist on the air. ”

True to form, Montoya waited until well AFTER he could no longer exploit his relationship with the “racist” Kim for a paycheck (now that Kim, booted not too long ago from ESPN, has no pull and has been relegated to a spot in Victor Conte’s SNAC newsletter and his shitty Triller podcast with the Saved by the Bell guy) before voicing this self-righteous moral indignation. Because I remember back in the day when these guys were thick as thieves and teamed up to push Kim’s agenda like two souls fully in sync.

I guess it’s good that Montoya finally found his sack, but one could ask about those 9 years when he sat on the pointy end of his moral compass, not saying a word and loyally alley-oop assisting the Kim agenda when we ALL knew what Kim was really about.

Got something for Magno? Send it here: paulmagno@theboxingtribune.com