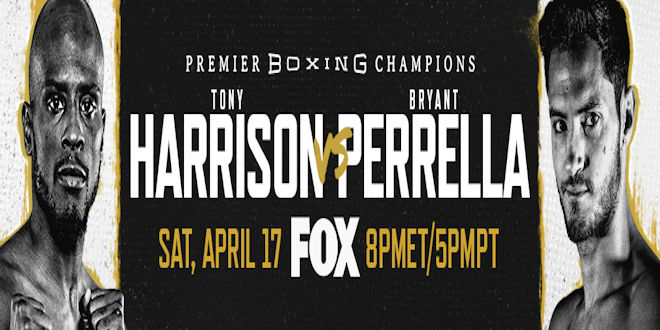 The event will be promoted by TGB Promotions and will take place without fans in attendance at the Shrine Auditorium and Expo Hall, an AEG venue, in downtown Los Angeles.

“Former world champion Tony Harrison is one of the brightest stars in the super welterweight division and will look to show that he’s ready to reclaim a world championship live in primetime on April 17,” said Tom Brown, President of TGB Promotions. Tony’s will and skill makes him a tough matchup for anyone at 154-pounds, but he will also have all he can handle in the very talented Bryant Perrella, who will be making his debut in the division. This exciting main event is buoyed by rising stars Omar Juarez and Vito Mielnicki Jr. competing in separate fights as part of a jam-packed night on FOX that boxing fans will not want to miss. ”

The Pride of Detroit, Michigan, Harrison (28-3, 21 KOs) spent his early boxing career under the tutelage of the late Emanuel Steward in the legendary Kronk Gym. As a professional, the 31-year-old was still considered one of the most skilled fighters in the sport despite coming up short in his first two attempts at a world title. The third time was the charm for Harrison, who shocked the boxing world in December 2018 by outpointing long-time champion Jermell Charlo to earn the WBC title in Brooklyn on FOX. Their rematch one year later ranks among the best fights of 2019. Harrison and Charlo fought mano-a-mano until Charlo stopped him in the eleventh round to regain the belt.

“Due to the pandemic, we’ve lost a lot of people over the last year, including my father Ali Salaam, and I’m dedicating this fight and the rest of my career to him,” said Harrison. “My father was always there in my corner, and I’ll continue with him right by my side spiritually. But my brother LJ is my head trainer now and we’m working hard to prepare for a tough fighter in Perrella. I’m coming off the longest layoff of my career, so I’m just excited to get back in action. The realest fighter in the game is coming back and I’m glad we’re going to be bringing this fight to everyone on free TV on FOX. This fight will be fireworks and I’ll be looking out for whenever it’s execution time. When I see the opportunity, I’ll knock his head off and put it on my mantle. ”

The 31-year-old Perrella (17-3, 14 KOs) began boxing at age 15, amassing an impressive 70-9 amateur record before turning pro in 2012. Fighting out of Fort Myers, Florida, Perrella rose quickly through the pro ranks , stopping 13 of his first 14 opponents, including a second-round TKO over previously-unbeaten David Grayton in June 2016. Three months later, he suffered his first pro defeat against current welterweight world champion Yordenis Ugas. Perrella bounced back from a close loss to Luis Collazo in August 2018 with a decision victory over Breidis Prescott and a stoppage of Domonique Dolton in his 2019 campaign. In Perrella’s last bout, in February 2020, he was on the short end of a controversial, last-second knockout at the hands of Abel Ramos, in a bout where Perrella was ahead on scorecards.

“I’ve made big changes in my game and they will reflect a more proficient fighter when I step in against Tony Harrison,” said Perrella. “I do not care about status or resume heading into this fight. I’m coming to do what I do best, and that’s dominate. I can not wait to get in there and perform on April 17. ”

Juarez (10-0, 5 KOs) has been lauded as much for his work outside the ring as he has for what he accomplished in it. After graduating high school in his native Brownsville, Texas, Juarez dedicated himself to giving back to the state’s youth. Still only 21, he has spoken to close to 40,000 community members and received recognition from the Texas State Senate and the Texas House of Representatives. In the ring, Juarez was a highly decorated amateur who turned pro in September 2018. He notched four wins in 2020, including a vicious first-round TKO over Raul Chirino on December 26 that signaled his readiness for the next level.

“Words can not describe how blessed I am to be fighting on FOX once again,” said Juarez. “As always, I’m going into this fight against Jessie Roman with victory on my mind. This will be my toughest fight to date, and I know what needs to be done to come out on top. I left Brownsville to be in San Antonio with my trainer Rick Nunez and we have a great game plan in place. Training camp has already started, and I’ll be ready to go come fight night. April 17 can not come soon enough. It’s go time! ”

The 29-year-old Roman (22-4, 11 KOs) represents a significant step up in class for Juarez. A respected amateur, Roman won his first 16 pro bouts before a disputed majority decision loss to Carlos Sanchez in Sanchez’s native Mexico. He appeared headed for a potential world title shot after stopping Luis Joel Gonzalez in April 2017 and following it up with a TKO over Erick Daniel Martinez that June. However, the Garden Grove, California native was derailed by a points loss to dangerous veteran and former amateur rival Javier Molina in June 2018.

“After a setback comes a major comeback,” said Roman. “I know that because I always come back stronger than before. I can not wait to square-off against Juarez and prove that once again, all while bringing a great fight for the fans to enjoy. ”

Representing Roseland, New Jersey, Mielnicki (8-0, 5 KOs) began turning heads during an exceptional amateur career where he compiled a 147-22 record and was named the Most Outstanding Boxer of the 2011 Junior National Golden Gloves amongst many accolades before turning pro. The 18-year-old was able to add four victories to his ledger in 2020 and he kicked off his 2021 campaign with a knockout of Noe Lopez in February on FOX.

“Training is going great. I always stay ready so I do not have to get ready, ”said Mielnicki. “I’m glad I’m getting right back in the ring so I can showcase my skills again. In my last fight, I introduced myself to the world on the biggest viewing platform of my career. I expect a tough strong Philly fighter in the ring with me on April 17 and I’m excited to return to FOX with another great performance. ”

The 23-year-old Martin (6-2) first turned pro in 2017 and won his first four fights to begin his career. Fighting out of Philadelphia, Martin has won two of his last three showdowns dating back to late 2019, and his most recent outing saw him drop a decision to unbeaten prospect Xander Zayas in February.

“I’m going to box smart and bring the pressure,” said Martin. “I know my opponent is a good fighter and a win over him would get me a lot of notice. I look forward to showcasing all of my skills in this fight on April 17. ”

Monaco have entered talks with Leicester City over a loan move for Boubakary Soumare.Soumare joined Leicester last summer on a five-year deal from...
Read more
Sports

There's a quiet confidence and a growing sense of belonging as Ajla Tomljanovic prepares to contest a Wimbledon quarterfinal for the second straight...
Read more
GOLF