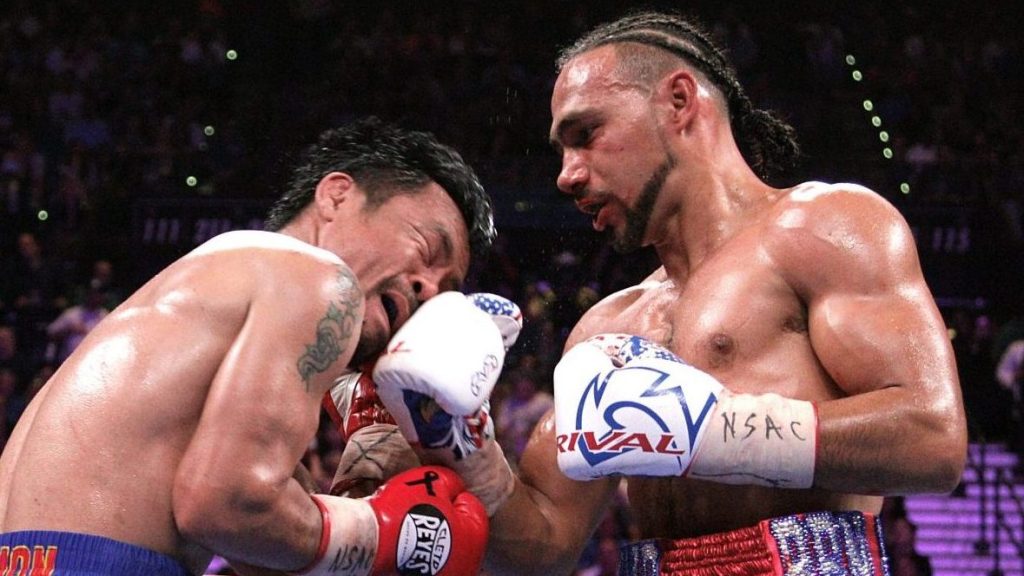 The trainers were Robert Garcia, Derrick James, Stephen Edwards and Ismael Salas, none of whom work with Thurman or Barrios.

Here are a few take aways from their conversation.

Here are some quotes from each trainer:

“Mario Barrios is a young fighter who wants to be great. He has not had the paydays that Thurman has, and I think that gives him a great chance. He knows that a win here will change his life. I have a lot of fighters who are from San Antonio like Barrios is, and I know he’s a very dedicated fighter who’s always training. He’s going to do whatever it takes to win this fight.

“Barrios is moving up in weight, which is a challenge, but he’s big enough and tall enough that he might be even better than a welterweight. I think he’s got a great chance of beating Thurman.

“Thurman hits very hard, so Barrios has to pressure smartly. He can not reach on his punches and he has to make sure he has his hands up. I personally think Barrios is going to win this fight. I see this as a close fight that’s going to go the distance. I could definitely see a split-decision.

“Thurman has great experience and has been in world class fights numerous times. He just has to go out there and be himself. He can not get caught up in Barrios’ game plan. He has to use his angles and find his punches.

“When Mikey Garcia was off for two and a half years, he was not a big name yet and was still really hungry and in the gym all the time. When he came back, he came back strong. Thurman has made millions of dollars, and that can make you comfortable. We’re going to find out how dedicated he is, because those big paydays can change your work habits. ”

“You really have to have an extensive training camp in order to combat ring rust. When Errol Spence Jr. fought Danny Garcia, we worked on a lot of things, and one of those was building back up his athleticism. One of the keys to Keith’s success has always been his athleticism. He’s going to need that, and that’s something that is fleeting.

“This fight will depend on the type of fighter Thurman is right now and if Barrios can implement his pressure. I think this is going to be a good fight and that it’s going the distance.

“Keith Thurman boxes intelligently, but what helps him in the ring is his ability to move. We’re going to be able to tell how intense his training camp was.

“Thurman is going to have to adjust to Barrios’ speed. I think there will be some pressure on him to catch up with the fighter moving up in weight. There’s pressure on every fighter, but I also know that Thurman really wants to shut up his critics.

“I think this fight is about pressure. I believe that Barrios has to be aggressive. He has to make sure Keith Thurman isn’t himself. Thurman is great if you let him be great. If Barrios can disrupt Thurman, it’ll be to his advantage. If he lets Thurman sit back, Thurman is going to box phenomenally. ”

“Thurman moves, but his movement is not overly efficient. He glides around the ring and jumps in and out with big shots. If Barrios fights the kind of fight where he’s putting pressure on Thurman, he’s going to have a lot of success. You have to step to Keith Thurman. If you give him room, you give him a chance to load up with his punches. I actually think Barrios will win this fight.

“When Julian Williams got clipped by Jermall Charlo with that big shot, I compartmentalized that for him. I told him how he was fighting a great fight, and you just have to give the opponent credit. I let him spar with no headgear on the first time he sparred, so he knew that I had the confidence in him. I also sent him out to spar with Gennadiy Golovkin, so he could see that anybody can get clipped like that. Barrios got stopped by Gervonta Davis, but that’s not the end of the world for him. How fighters bounce back from that does depend on what kind of person you are. He seems like a guy who will be able to put that behind him.

“I think there’s a lot of pressure on Keith Thurman in this fight. Thurman went into the Manny Pacquiao fight thinking he was going to have that name on his way to superstar status. Losing that fight is going to hurt the ego. The pressure on Barrios is because no young fighter wants to lose two fights in a row and go to the back of the line. Thurman knows there’s a huge fight for him down the line if he can get past Barrios, and that brings pressure.

Fighters do not admit it, but there is a different kind of hunger when fighters are working toward that title shot. It’s different than once you get it. Even in Thurman’s prime, he was only fighting once a year. Boxing is a game of skill, and you build skill with repetition. You do not get better at doing anything by not doing it for an extended period of time. I think that’s going to make this fight more competitive than people think. ”

“The most important thing in sports is longevity. It’s a highly-coordinated sport and you have to be explosive. To remain at a high-level in that category, it’s all about training camp. Ring rust is something you really have to deal with.

“You have to control the intensity of the work to keep a more experienced fighter fresh. But at the same time, you have to keep the boxing ability at a high level. Those reaction times need to be sharp.

“I believe that the best chance Thurman has is in rounds four through six with a stoppage. If it goes the distance, I think it’s a close decision for Barrios. If Thurman can control the tempo of the fight, he can win.

“I work with a veteran fighter in Erislandy Lara, we do not have a date for his next fight yet, but we have been working three times a week for the last two months. Because we’re keeping his ability and his stamina up. That’s the way to deal with ring rust when you’re later in your career.

“I believe Thurman lost the fight with Manny Pacquiao because he lost the ability to control the aggression of Pacquiao. He was there in front of Manny Pacquiao, and Pacquiao got him early, and that changed the whole fight.

“Aggression is the way to beat aggression. Barrios needs to keep a strong front hand in this fight, with his jab, and also with mixing up those punches. ”

Andrew McCutchen may return from the injured list before tomorrow's series finale against the Atlanta Braves while Willy Adames could trade...
Read more
NASCAR

The Leafs did make progress, but it was still not good enough

It has been almost a week since it happened and it sometimes does not feel real that the same outcome occurred yet again. The...
Read more
Load more