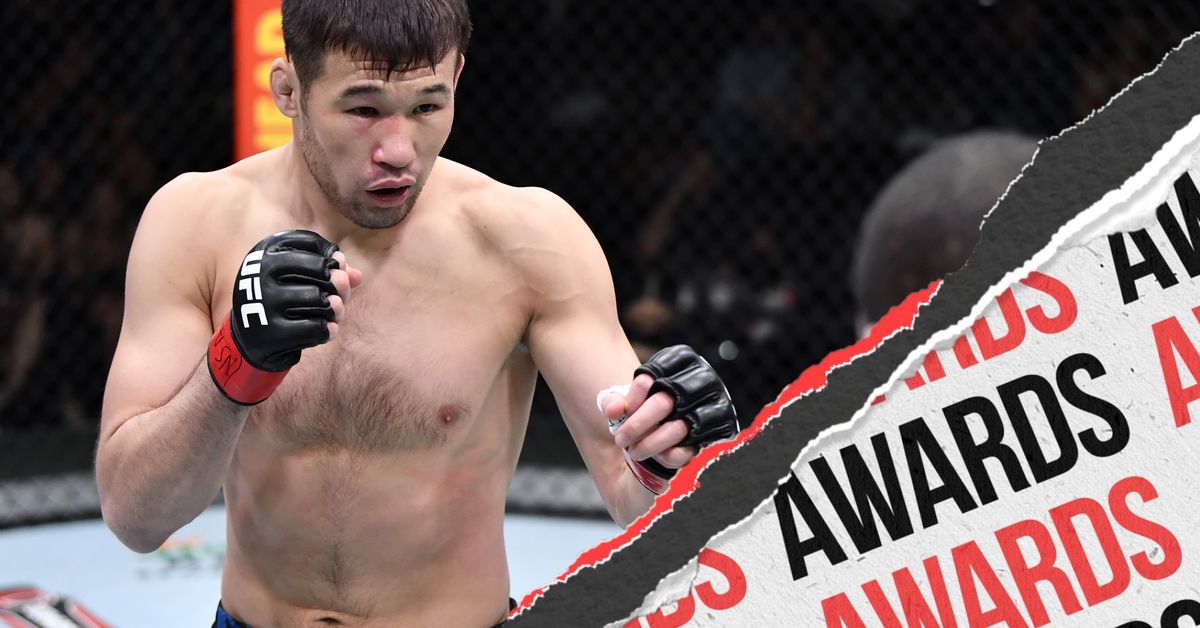 UFC Vegas came and went with little fanfare, the top of the card not delivering much, despite a number of thrilling prelims. Sean Strickland never kicked his attack into high gear, but still found enough success to outpoint Jack Hermansson — once the ‘Joker’ failed to find a way to put Strickland on his back. And unfortunately, the co-main event between Nick Maximov and Punahele Soriano started with some promise, but quickly devolved into a grinding affair.

However, the rest of the card delivered the goods. Julian Erosa and Steven Peterson delivered the type of performance fighters dream about, ensuring the card was worth watching solely for their fight alone. Alongside that thriller, there were several other fun fights to, which I’ll get into with my Unofficial Awards ….

This was a difficult choice. There were a couple of debutants who made tremendous splashes, but I like to reserve this spot for someone with previous UFC experience. Erosa had the most entertaining performance in a win, but entertaining is not the only criteria at play here. Fighters need to show that they’re clearly on the rise.

To that end I’m going with Shavkat Rakhmonov. The Kazak prospect eliminated sturdy veteran Carlston Harris with a spinning hook kick, followed by some precise ground strikes that left Harris woozy, if not all the way asleep. Given Harris’ name is not that well-known even by those who follow the sport closely, Rakhmonov did not make as big of a jump as he could have, had his opponent been of higher profile. However, Harris is not a chump and Rakhmonov tore through him like wet paper. Rakhmonov needs a ranked opponent in his next fight.

As there was not anyone who made any massive leaps, there was not anyone who really fell off a cliff either. Regardless, Miles Johns no longer looks like a rising prospect following his upset loss to John Castaneda. He’s still young enough in his career that he could reclaim his status, but he’ll have to address his inability to make in-fight adjustments. Johns abandoned his jab and just went all-in on power shots. He’s got the skillset to put together more complete performances, but his inability to do so on Saturday leaves doubts as to whether he will anytime soon.

It was not a huge surprise to see Jailton Almeida have the strongest debut of the fighters at UFC Vegas 47. But the fact he did so without taking a lick of damage was a bit of a shock. The lanky light heavyweight landed a power double off the bat, never allowing Danilo Marques back to his feet from there. To be fair to Marques, he did not make it easy for Almeida to find the mount, but it was game over once Almeida did. The hammerfists came hard and heavy, leaving his opponent with nothing to do other than cover up until the ref stepped in. Marques is hardly a world-beater, but Almeida did what he was supposed to do against a fighter he was expected to beat. It’s been a decade since anyone thought light heavyweight was a deep division. There’s a big opportunity for him to make a rapid climb up the rankings.

No doubt Chidi Njokuani deserves an honorable mention at the very least given he eliminated Marc-Andre Barriault in just 16 seconds, but I gave the edge to Almeida given his higher ceiling. Njokuani gets more props later.

I’ve said this before at least two other times, but this has to be the end of the road for Sam Alvey, right? The man is winless in his last eight fights. Sure, he hurt Brendan Allen early, but he ended up a long way away from getting his hand raised. If Alvey remains on the roster, someone needs to have a sit down interview with him and find out what dirt he has on the organization.

Julija Stoliarenko now sits at 0-4 in the UFC, but I’m not even sure I’d cut her loose. One of those losses came as a one-off coming out of TUF, and the three since then have all come against quality competition — including the loss to Alexis Davis. Stoliarenko’s road has NOT been easy. I do not see her as a future title contender, but I do see her as a solid gatekeeper to the top ten with a little more seasoning. There is the possibility Stoliarenko stays on the roster as women’s bantamweight needs bodies, but I would not be likely to put money on that happening.

Had Davis been the one to fall, it would have been her fifth loss in her last six contests. Even though she’s been fighting tough competition, there’s only so many losses the UFC is (usually) willing to permit (provided your name isn’t Sam Alvey). Davis may be past her prime, but her intelligence and consistency has allowed her to maintain her status as a quality gatekeeper into the official UFC rankings. Look for her to continue that role for a few more years yet.

Given it was the last fight on the contract of John Castaneda, he probably needed a win if he wanted to be re-signed. He not only got it, he turned in the most complete performance of his career and changed the narrative on his ceiling at 135. Rather than being the action-fighting stepping stone many believed him to be entering the event, putting Johns to sleep has him looking like a rising talent in the incredibly deep bantamweight division. I have a hard time believing the UFC will not re-sign him.

I can not count the amount of times this past week I saw someone say they were surprised to see Njokuani on the UFC roster after he washed out of Bellator. Not that they did not believe he did not have the talent to provide some quality scraps, but it’s usually UFC washouts ending up in the Viacom owned competitor, not the other way around. Regardless, it was awesome to see him prove he’s still a quality fighter, disposing of a durable Marc-Andre Barriault with a simple one-two 16 seconds into their fight.

Fans can not have a queasy stomach and stick around with MMA for long. Every sport has their fair share of nasty injuries, but it really feels like there’s a higher percentage in the cage — simply given the nature of the sport. This time around, we got one to kick the event off when Denys Bondar suffered a dislocated elbow as he tried to post against Malcolm Gordon. It was hard to see as the fight was going on, leaving most wondering what the hell happened after Bondar screamed following a judo throw from Gordon. But, even before ESPN showed the replay, it was clear to see Bondar’s elbow was all bent out of shape as he was attended to by a ringside doc. It was not how Bondar wanted to start out his UFC career, but I doubt the promotion will put much stock in this loss. As famed broadcaster Gus Johnson once said, “Sometimes, these things happen in MMA.”

John Castaneda isn’t the most well-known face, even to those who follow the sport closely. One of the biggest knocks on the man known as the ‘Sexi Mexi’ has been his willingness to just go out there and throw down. In one of his latest fights, commentator Michael Bisping stated Castaneda would add so much more to his arsenal if he was willing to extend his punching combinations a bit more every time out.

Rather than get surly about addressing potential weaknesses, Castaneda heard what people were saying and responded by addressing the issue. He even directly credited Bisping in his post-fight interview. Having a game plan and sticking to it is what led to his inspired beat down of Miles Johns here. With a job that’s dependent upon entertaining an audience, criticism is going to be a part of the gig. Rather than get butthurt from those who meant well, Castaneda filtered the constructive criticism from the haters and used it to address those concerns. Hat’s off to him for publicly acknowledging Bisping the way he did.

Best Line of the Night

After his eye swelled shut, Bryan Battle was forced to go the last half of his contest against Tresean Gore with vision in only one eye. And while getting interviewed by Michael Bisping, Battle responded to Bisping’s question about how much his vision was affected by stating “Man, who needs two eyes?” Bisping, famously having won the middleweight title with only one eye, quipped “Tell me about it.” Bisping was easy to hate in his fighting days, but he’s been just as easy to like since transitioning over to commentating.

Most Years Shaved Off Their Lives

There’s a reason why fans can not help but have gobs of respect for fighters when they endure the type of battle Erosa and Steven Peterson put themselves through. There’s only so many of those fights they have in the tank. Even then, there’s no guarantee that with each one they haven’t shortened their careers, perhaps even their lives. It does make it a shame Peterson missed weight as it left him ineligible for the Performance Bonus the two of them received for their blood and guts performances. Even worse, he gave up a chunk of his own purse as well. I typically do not like the UFC providing a locker room bonus to those who missed weight, but I’d be happy to see an exception be made here as Peterson is unlikely to ever be the same again. Neither is Erosa, but he’s at least getting a nice chunk of change for it.

I already mentioned how bad the fight between Maximov and Soriano was, but I want to be fair to both of them. The first half of the fight was not terrible. There were some extended moments of stalled action, but there were also some fun wrestling exchanges back and forth. However, Maximov maintained the pressure, eventually tiring out Soriano. Thus, the last half of the fight saw Maximov leaning against and laying on Soriano … and that was about it. Maximov has potential, but it’s going to take time for him to reach it. In the meantime, his fights could prove torturous.

Brendan Allen was the only fighter to step in on short notice for the card, but it was still a noteworthy performance. He ate a heavy shot from Alvey early, but adjusted accordingly and walked out of the night with a win, secured with a club and sub. Given that he only agreed to the bout the week of the event, without even having another fight scheduled that he was preparing for, that’s a real quality win.

Strickland already knows he did not put his best foot forward. He said so in the post-fight interview. But it needs to be emphasized given he’s developed a reputation as a wild man. Strickland fought a very measured fight that no doubt earned him the W. But if he really expected a title shot after a win over Hermansson, he needed to do more than just enough for a win.

They say boxing is the theater of...
Read more
BOXING