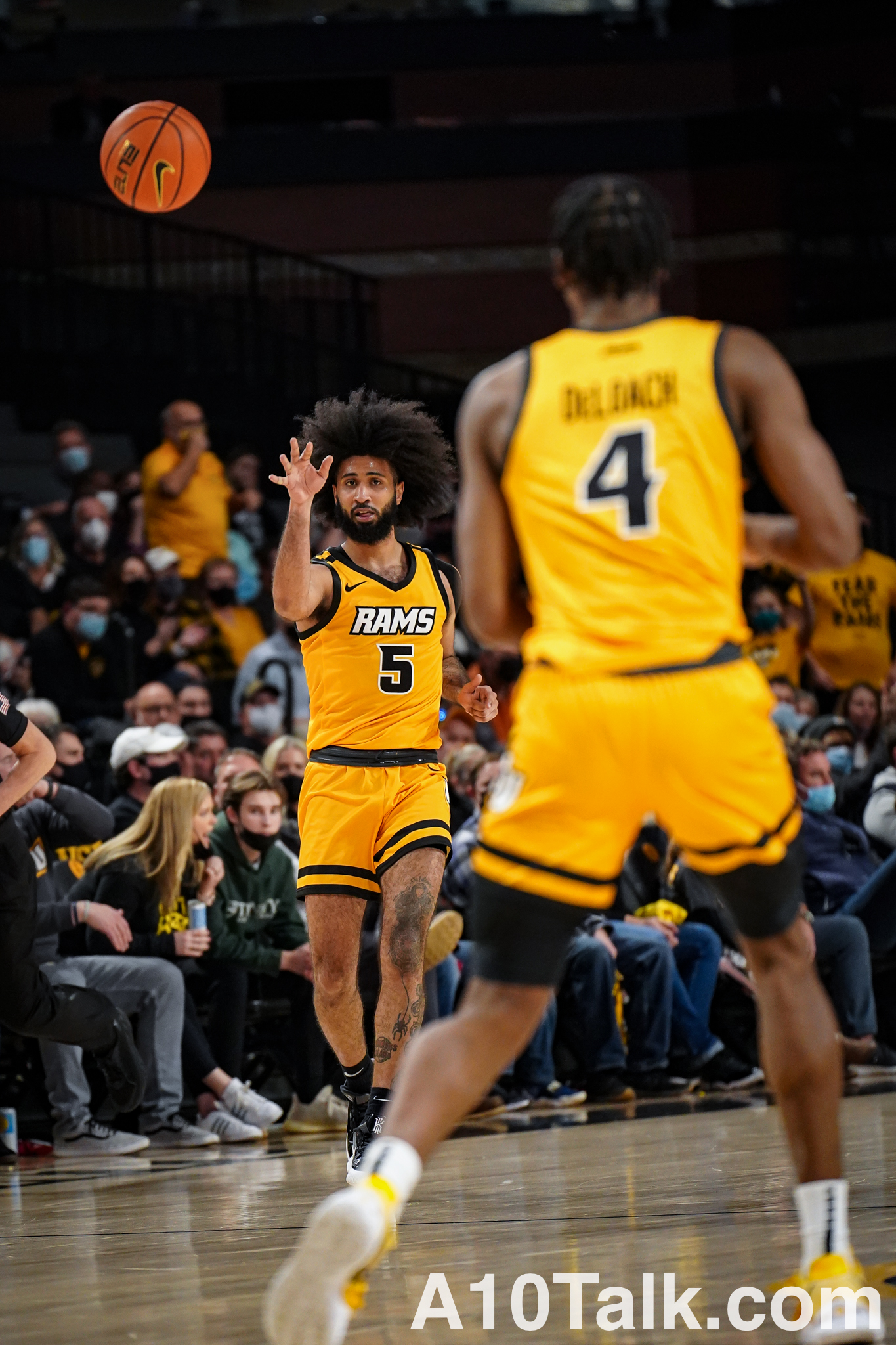 Second verse, same as the first?

Both teams desperately need this win to stay afloat in double-bye contention for next month’s A-10 Tournament: VCU sits second in the conference standings entering the matchup, while the Spiders are sixth. The Rams also cling to a fringe chance at earning an at-large bid into next month’s NCAA Tournament, which essentially requires VCU to run the table through the regular season.

VCU has done just that in recent games, winning four straight after losing in a 30-point blowout at home to Dayton. The most recent game saw VCU defeat Fordham at Rose Hill Gym in the Bronx, 66-61. On that night, senior guard KeShawn Curry led all scorers with 21 points while senior forward Vince Williams added 19 points of his own.

Now with five regular-season games remaining, the Rams are looking to build off the momentum as they enter a tough closing portion of the A-10 schedule.

What more can be written about the Richmond-VCU rivalry? The two schools sit six miles apart but represent vastly different campus experiences and vibes.

Of all the rivalries VCU is a part of, the rivalry with Richmond by far has the most “juice.” The ticket office proves it, as Friday night’s game is the first announced sellout VCU has had this season.

These two programs met most recently at the Robins Center on Jan. 29 in a thriller that saw VCU grab a late, 64-62 victory. The Rams were helped by arguably the best game of Williams’ collegiate career, where he fell just two assists shy of a triple-double.

The moment of the night came in the game’s fading moments when Williams knocked down a go-ahead 3-pointer with 25.3 seconds to go. The shot broke a 61-61 tie and gave VCU a lead it never relinquished, as a running jumper from Richmond’s Jacob Gilyard missed off the rim.

The win gives VCU a 56-31 lead in the all-time series, which dates back to January 1976. In the last 20 meetings, VCU has won 15 times, including the last four at the Siegel Center.

With so much on the line for tournament resumes on both sides, the rivalry will certainly carry extra weight. With that in mind, VCU has made the game a “Gold Out,” with free T-shirts available for all fans in attendance.

Friday’s game will be nationally televised on ESPN2 and will tip off at 7 pm The Richmond-VCU game is the only # FridA10 matchup on the A-10 slate this week.

With the win at Fordham on Feb. 15, VCU improved to 8-1 in true road games, with the only blemish being a 20-point loss in Olean to the St. Bonaventure Bonnies.

The 8-1 mark is not only impressive, it is also historic. The Fordham win improved VCU’s road record in A-10 play to 6-1, which is the second-best road conference record the Rams have had since joining the A-10 in 2012-13. With two road games left, VCU can break the program’s A-10 road wins record by grabbing victories at Massachusetts and Saint Louis.

The all-time VCU record for road wins in a season, 11, was set in 2006-07. With just two road games remaining, that record will remain safe for this season.

VCU’s 8-1 road record is the best mark the Rams have achieved in nine road games since 2012-13. That season, the Rams went 8-1 but dropped the last two road games of the season. This season, the Rams rank third in Division I in road winning percentage, trailing just North Texas (6-0) and Murray State (9-1).

While road games are important from a moral standpoint, they are critical in determining the NET rankings. Under the NET’s quadrant system, a Quadrant 1 win requires a home opponent to be ranked 1-30, while a road opponent can be as low as 75th. Thus, VCU’s road win against Dayton is a Quadrant 1 victory, while the home loss is a Quadrant 2 loss.

While teams always want to defend their home turf, there is much value in securing road victories due to this weighted scale. VCU’s lone remaining Quadrant 1 opportunity is in the season finale, a March 5 road game against Saint Louis.

Rivalry paused for a good cause

On the floor, the Rams and the Spiders will be going at each other throughout the night on Friday in the 88th meeting of the Capital City Classic.

Off the floor, Richmond and VCU are working together to help the capital city in a time of need.

The VCU and Richmond athletic departments announced Thursday that they are partnering to collect schools supplies at Friday’s game for students, teachers and staff of William Fox Elementary. Built in The Fan Neighborhood of Richmond in the 1910’s, William Fox Elementary suffered a devastating, three-alarm fire on Feb. 11 that has left students temporarily without a school building and The Fan without one of its most iconic structures.

Fans attending the game are encouraged to donate supplies to replace what was lost in the fire, including books, pencils, tissues, wipes and other school supplies for elementary school-aged students. Per the joint release, supplies will be collected at the game and at the lobby of both the Siegel Center and the Robins Center over the next two weeks.

“As educators, as parents and as members of the Richmond community, we were saddened by the effects of the tragic fire at Fox Elementary last week. We hope that we can use one of Central Virginia’s showcase events to help Fox Elementary replace some of what was lost and provide its staff and students with resources to assist in their efforts to rebuild, ”VCU Athletic Director Ed McLaughlin and Richmond Athletic Director John Hardt said in a joint statement.

Persons wishing to donate financially can do so via the Richmond Public Schools Education Foundation at rpseducationfoundation.org.

Tillman tearing up the G-League

How much longer will it be before former VCU star Justin Tillman gets his NBA call-up?

That’s the question some VCU fans are asking as Tillman continues to put up eye-popping stat lines for the College Park Skyhawks, the G-League affiliate of the NBA’s Atlanta Hawks.

Tillman currently has eight consecutive double-doubles and 12 consecutive games scoring 20 or more points. The game logs include a 31-point, 24-rebound performance in a Valentine’s Day loss to the Fort Wayne Mad Ants and a 28-point, 23-rebound game in a late January win against the Delaware Blue Coats.

On the season, Tillman is averaging 25 points per game on 59.8% from the floor. He has also been a menace on the glass, averaging 12.6 rebounds per night.

The Skyhawks ‘next game will be at home against the Capital City Go-Go, the Washington Wizards’ G-League affiliate. The Skyhawks sit at 7-9 on the season thus far, good for 10th place in the East.

Former VCU star and 2021 A-10 Player of the Year Bones Hyland has been selected as an injury replacement in the 2022 Clorox Rising Stars. The Denver Nuggets guard was selected to replace Sacramento Kings guard and former Baylor star Davion Mitchell.

On the season, Hyland is averaging 8.8 points, 2.7 rebounds and two assists per game. He earned his first career start earlier this month and has seen his minutes steadily increase due to injuries and load management within the Nuggets roster.

The Clorox Rising Stars, scheduled for Friday night at 9 pm, will feature four seven-player teams competing in a three-game tournament.

Hyland, the only active NBA player to attend VCU, is leading all NBA rookies in free throw percentage (88.1%) and is third among rookies in made 3-pointers (79).

Where does VCU rank?

Here is where VCU ranks in important metrics, as of Feb. 17:

Per Bracket Matrix, VCU appears in 11 brackets (out of 115), with an average seed of 11.55. Only Dayton (15) and Davidson (107) appear in more brackets, with Davidson as the assumed A-10 auto-bid in the overwhelming majority of projections.