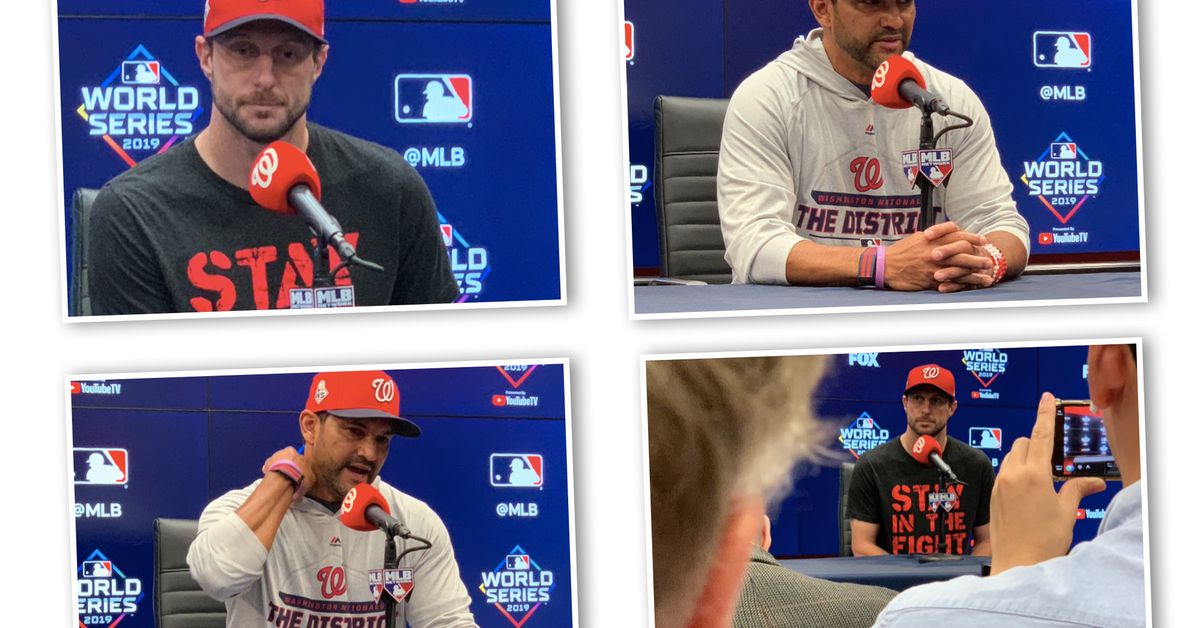 “Are there rumors that Max has a neck spasm and Stras might have to go on short rest?”

The start of Davey Martinez’s pre-Game 5 of the 2019 World Series presser was just minutes away, and a sometime source of interesting information had just asked one pretty big question that put the delayed release of the Washington Nationals‘lineup for the night in, potentially, a different light.

That is not enough to even tweet an “I’m hearing chatter” note responsibly, of course, and before as important a game like this… but I’d been sitting around, along with others, as I would see shortly, who assumed the status of catcher Kurt Suzuki (hip issue) was the actual lineup holdup, as the veteran backstop tried to see if he would be able to go, but just the idea of ​​Max Scherzer not taking the hill in Game 5 of the World Series?

Do I bluff and email the PR people with the team and see if they acknowledge something is up with Max?

A quick social media scan came up with one tweet which asked a similar question about some talk Scherzer would not take the mound, but there was not enough time to start trying to find a real (non-Facebook via Twitter rumor) source with the pregame presser moments away, and a lineup post queued up ready to post the nine names going up again the Astros in the 2-2 series in which no one had won at home, with a trip to Houston looming, and the chance for the Nationals to either make the trip to Minute Maid Park up a game with two shots to win it, or playing for their postseason lives in (hopefully) back-to-back games.

“Where did you see that?” I asked via DM, checking with the person who sent the original note.

“The only thing I see online is this [link to now-deleted tweet]. It’s weird that lineup is not out yet. About 30 mins later [than] first two games. ”

So what do I do in the five minutes there are before Martinez’s presser?

Maybe I’ll check with the other reporters? I’m set up in the dining area in the Nationals Park press box, with several TV sets arranged around the room, some piping in ESPN, others the in-house stream of the nearly-live feed so, though you can not see the field if you’re sitting (or if you’re eating) here, you can plug in and cover the game in real time, with power strips down the middle of the table for members of the media without a seat in the press box , proper … and so I walk to the other section, but everyone has their heads down, headphones on, prepping pregame posts – with the exception of one longtime beat writer, who is, however, involved in a conversation at that moment.

My noticeable nervous pacing prompted him to give me the universal “just a sec” sign, and he extricated himself, and descended a small, three- or four-step, staircase.

“Have you heard anything about Max? I’ve got a pretty reliable source saying they heard a neck issue will keep him from going, and that’s what’s behind the holdup with the lineup. ”

Down to Martinez’s presser.

I sent a DM to the source as we took the elevator down. I prodded a couple friends on the way to see if anyone was hearing anything.

“Just asked around,” I typed out on my phone with my thumbs.

“No one has seen / heard the chatter … and Max did say specifically yesterday that all the shoulder / back stuff from July / August was completely cleared up in his pregame presser yesterday. Never know. ”

Q. Are you still at all managing the issues that kept you on the IL during the season or do you feel like it’s completely flushed?

MAX SCHERZER: The back issues?

“[Reporter’s name redacted] said he guessed the lineup delay was waiting on Suzuki to say if he could go or not, ”I continued, chatting with the source on the elevator.

Martinez walked into the press room in the bowels of Nationals Park a moment later.

“Before we get started, I want everybody to know that Max will not start today,” he said.

[The other reporter I talked to turned around and gave me a look. A mix of, you had it, and sorry you didn’t have it, at least as I read it, the look.]

“He had – yesterday he had a little bit of spasms in his right trap and neck. They treated it. He woke up today a lot worse, ”Martinez continued.

“Your source was spot-on,” I DM’d the source.

We could have had something. Five minutes of internet fame and a snarky, self-effacing line in our Twitter bio about how we broke that news once… but, have broken nothing, but rules regarding punctuation; since.

“Kind of started a couple of days ago,” Scherzer explained in his own press conference on the issue a little later.

“I came in, got treatment two days ago, and did not feel quite right. But I know for me, like hitting, hitting is a similar throwing motion, usually if I can hit usually things can loosen up and I can throw a little bit better. When I hit, I could tell that did not loosen anything up. So it took throwing off.

“And then when I woke up this morning I was completely locked up. It’s not just a muscle spasm. In talking to the doctors here, the nerve that’s in the neck is all jammed up. Thankfully from the doctors, what they say, as long as I have no numbness coming down my arms or anything, you do not actually deal with any serious, any long-term damage here. It’s just the sensory that’s pinching up the nerve in the neck and the trap, the whole muscles that surround your neck are just completely locked up in spasm.

“So for me it became impossible just to do any menial task whatsoever today.”