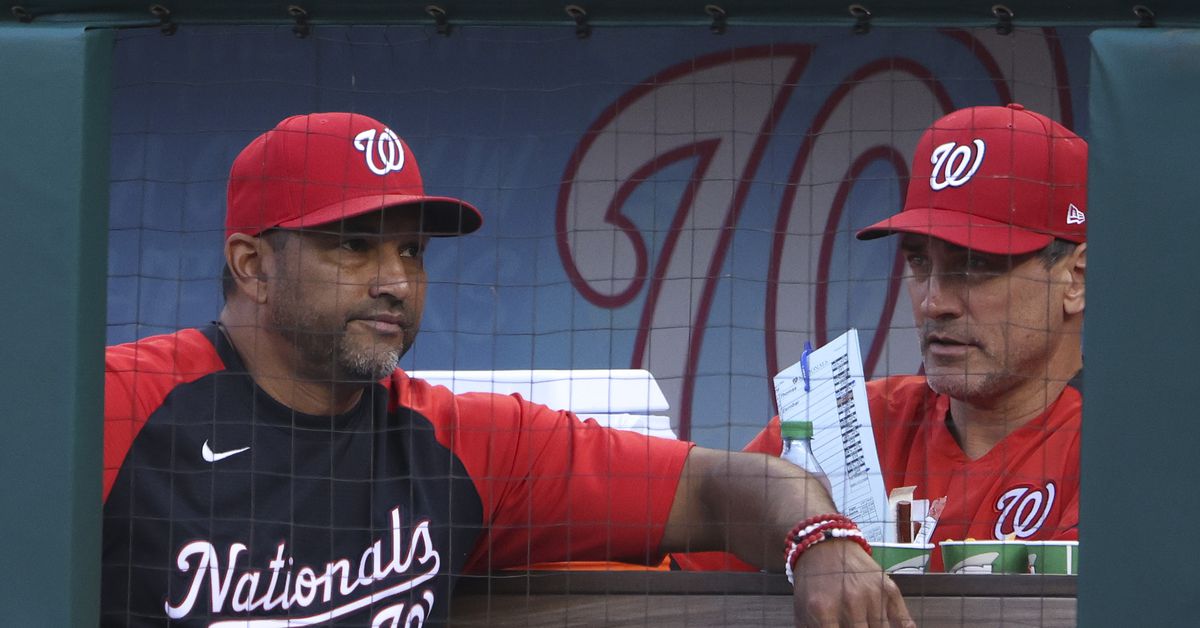 Davey Martinez is relentlessly positive. If you have watched the Washington Nationals‘manager closely over his four seasons on the bench with the Nats that’s not news.

It has not been easy for anyone in the nation’s capital in the two years since the club won the first World Series by a DC-based ballclub since 1924 in 2019, but even after a disappointing 65-97, fifth place finish in 2021, in a season which saw the team trade off their expiring contracts (and a year-plus of Trea Turner) in a deadline sell-off, the skipper found a way to stress the positives of what he saw over the final months.

“I saw some good things over the last couple months,” Martinez said after the regular season finale.

“Some of our young players played well, and I’m looking forward to 2022 and Spring Training and the future for this organization.”

Before that, Martinez knew, there were a few long months ahead of him and for everyone in the Nationals’ front office.

“So I’m excited about the future, especially with some of our young kids.”

It was easy, of course, to find positives in what one of those young kids, Juan Soto, was able to accomplish as a 22-year-old (who turned 23 in October) in his own fourth season with the Nationals.

“He is the epitome of what a great major league hitter is.” https://t.co/aJJ3lFRM3x

“Just one, he’s so young,” Martinez said, “and to do the things he’s been doing, he’s – as you can see – some of the names that pop up next to his, it’s incredible, it really is. So, I can not wait to watch him continue to do what he does and watch him grow, I mean, he’s truly one of the best young players in the game if not the best young player in the game, so it’s been a lot of fun to be here with him and I expect us to be together for a long time. ”

Just a few examples of the names that pop up next to Soto’s?

As the Nationals noted in their Season in Review, Soto, “… was the only qualified player in Major League Baseball with more walks than strikeouts”In 2021, and his,“ … .465 on-base percentage led Major League Baseball and was the highest in a full season since 2008 ([Hall of Famer] Chipper Jones, .470),“While,”… his 145 walks were the most in a full season since Barry Bonds set the Major League record for walks in a season with 232 in 2004, and the second-most by any player prior to his 23rd birthday behind HOF Ted Williams (147 in 1941). ”

So yeah, that’s some pretty heady company, but the Soto team played on down the stretch and the one he’ll be part of in 2022 will look a lot different than the Nationals’ clubs over his first three and a half years in the majors .

The roster that finished out the season, post-trade deadline, was significantly younger and less experienced, with a number of players who were acquired at the deadline getting opportunities to test themselves and show what they could do at the major league level in the last two months.

“We made some changes, as we all know, and we definitely got younger, and we got some really, really good pieces, and I’m looking forward to the future, I really am with these guys,” Martinez told reporters in his season-ending Zoom call after Game 162.

“You saw Josiah [Gray]the last few outings what he can do, Keibert [Ruiz], what he can do, Riley Adams, who did well for us, and is growing, a lot of guys. Mason Thompson, who, he’s had his struggles, but in moments he showed signs he can be really good in the bullpen for us.

“I’m truly excited. These are just part of the guys – we still got some guys in the minor leagues that we got in trades, that I really think have a future here in the big leagues with us as well, so like I said, I talked to the boys before the game, I told them we’ve got a lot of work to do this winter, to be ready in Spring Training, they got to be ready physically as if it was Opening Day, and then we can get right into the baseball skills and stuff right from the gate. But I’m excited. ”

Adding the talent they acquired at the deadline to the players who stayed put and tried to make the most of their opportunities, and mixing those talents with all the prospects in the organization from previous deals and drafts is the plan for what GM Mike Rizzo and Co . hope will be a quick reboot rather than a full-on rebuild.

“The players that we acquired today at the trade deadline, and the last couple of drafts and trade deadline acquisitions we had, will be the core of this next championship-caliber club, and that’s our goal,” Rizzo explained in the immediate aftermath of the sell-off last July.

“So, our goal is to build one of the great organizations in baseball. We’ve been that for the last 10-12 years, we plan to continue to be that, and our process is tried and true and we expect nothing but excellence. ”

“And our goal is always to do this,” Rizzo continued, flashing his 2019 ring, “to win a World Series, win a ring. I wore it today to remind myself that’s the goal. ”

Martinez is excited about the players that will be back and will be supplemented by any new additions, and all the players the team added through signings, trades, and the draft the last few years.

“We got Josh Bell, Juan Soto,” Martinez said. “We got some of our young guys, Luis [García]Carter [Kieboom] who was up here and got a lot of playing time, we got Lane Thomas, who is another guy we got in a trade who did superb. So like I said, I’m going to go home this winter and do what I always do, and try to relax a little bit, but continue to think about these guys and try to see how we can make them better coming into next year .

“So for those guys, all I can say is that they played hard, they really did, and we were in every game till the last couple innings, so I’m proud of the way they went out and played the game, and we ‘re going to get better, and we’re going to get better really quick. ”

Asked to sum up his experience in 2021 in one word, Martinez struggled.

“I’ll go home and I’ll get back to you on that one. It’s been, like I said, we had some hardships, but I saw some good things, and I’m really proud of the boys, I really am. ”