What the Eagles should do at running back 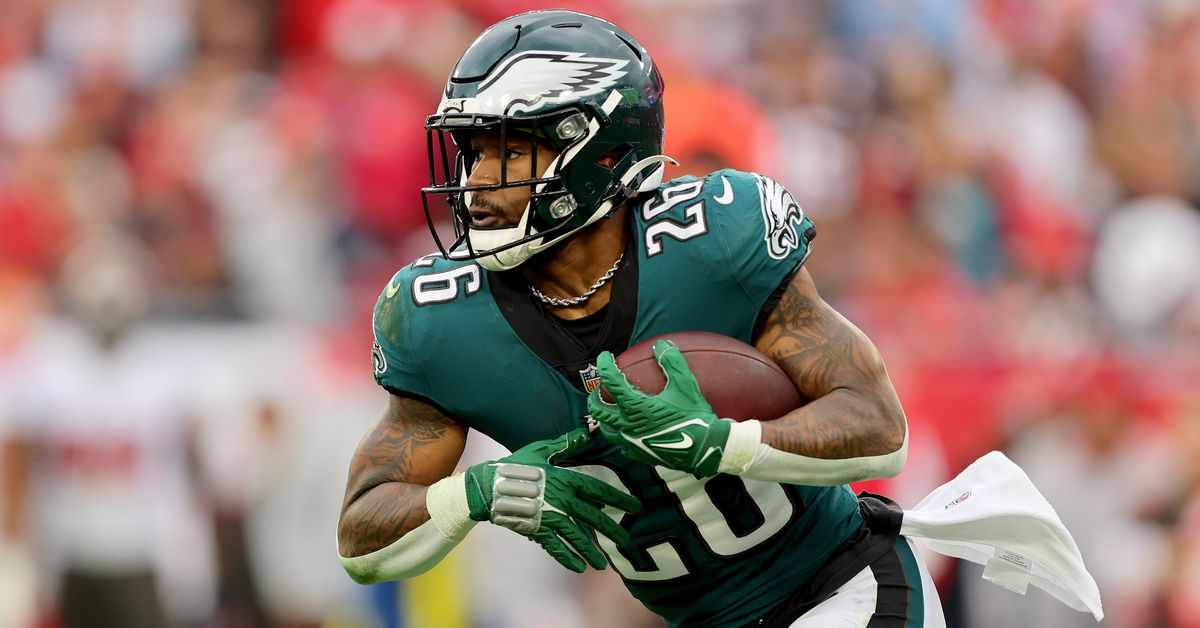 REVIEW: Coming off a disappointing 2020 campaign in some respects, there was interest in seeing how Sanders would respond in 2021. In terms of efficiency, he his best season with 5.5 yards per carry. In terms of volume, he had his worst season with just 754 total rushing yards and nary a single touchdown. Sanders’ production was limited due to the combination of 1) the Eagles inexplicably under-utilizing him early in the season, 2) multiple injuries, and 3) other running backs being trusted to rotate in. Whereas Sanders excelled as a home-run hitter in 2020, his longest run in 2021 was just 38 yards. There were 32 running backs who had at least one longer run than that last season. Sanders’ production – in terms of both volume and efficiency – as a receiver also declined for the second straight year. Pro Football Focus graded Sanders 42nd out of 64 running backs in pass protection. Sanders set a career low in fumbles with just one, which was a positive step, but he also had a couple of near fumbles that were fortunately blown dead early.

OUTLOOK: We know that Sanders is a talented runner. It could be nice to see the Eagles lean on him more; we’ve yet to see him utilized as a workhorse back. 2022 is probably a good time to do that considering he’s currently set to be a free agent after that. Sanders is currently eligible for an extension but 1) it’s not the Eagles’ modus operandi to invest big resources into the running back position and 2) being a good runner probably isn’t enough to warrant a new deal. Howie Roseman might be more willing to pay Sanders if he was proving to be a real weapon in the passing game … but, outside of his rookie season, that just hasn’t been the case. There’s an argument to be made the Eagles should be fielding trade calls on Sanders if they do not plan on re-signing him. But Philly will probably value his presence more highly than what they can get for Sanders.

REVIEW: Gainwell got off to a slow start in training camp but really came on in the preseason games. He began the season as the clear RB2 behind Sanders, making an impact as a two-minute back as early as Week 1. Despite showing promise, though, Gainwell’s usage only dropped from there (aside from garbage time). It was strange. The rookie did fumble in a couple of key spots, which did not help his case. Still, he should not have been so underutilized.

OUTLOOK: Gainwell does not obviously project to be a volume ball-carrier but he deserves more rotational carries in addition to increased targets in the passing game. Fumbles aside, good things generally happened when he touched the ball. The Eagles need to rely a little more on their RB2.

REVIEW: BoSco was the odd man out in the rotation early in the season; he did not log his first carry until after Sanders got hurt in Week 7. Sanders getting hurt twice in 2021 opened up opportunities for Scott and he took advantage. Scott did have a really bad fumble against the New York Giants in Week 12 that contributed to a disappointing loss at MetLife Stadium. On the whole, though, he was pretty solid for an RB3 type.

OUTLOOK: Scott is set to be a restricted free agent this offseason. The lowest RFA tender is worth about $ 2.43 million, which is like top 30 running back money in terms of annual value. That’s probably more than the Eagles are willing to pay him. The team could decline to tender Scott, allowing him to enter unrestricted free agency. From there, Scott could come back to the Eagles at a lower rate if he does not have any better offers out there. Maybe he returns on a one-year deal worth just over $ 1 million?

REVIEW: Howard began the season on the practice squad. Sanders’ midseason injury prompted the Eagles to elevate him to the roster twice. He made the most of his opportunities by posting 274 yards (5.4 average) and three touchdowns on 51 carries over four straight weeks. The Eagles went 3-1 in that stretch where they established their identity as a running team. Unfortunately, Howard suffered a knee injury and then a stinger injury. Probably not a coincidence his efficiency dropped after those issues, posting 3.8 yards per carry on his last 35 carries of the season. The Eagles did not trust him with a carry in their playoff loss to the Tampa Bay Buccaneers.

OUTLOOK: Howard was a pleasant surprise for a stretch in 2021. The Eagles might be able to bring him back on the cheap. But they might be best looking for an even cheaper and younger replacement. Howard is only 27, yes, but his body has logged a lot of touches (1,114 in his career) and he’s dealt with multiple injury issues since 2019. His skill set should not be impossible to find in the draft.

REVIEW: Huntley flashed some intriguing potential in training camp with some long breakaway runs. There was thought he might make the roster but missing time due to injury landed him on the practice squad instead. Despite lacking an inspiring option at kick return, the Eagles kept Huntley on the practice squad for the season. He was elevated for the Week 18 final against Dallas and instantly had the team’s second longest kick return of the year. After that, the Eagles promoted him to the roster but kept him inactive for the playoff game.

OUTLOOK: Huntley will compete to prove he belongs on the 2022 Eagles. At the very least, he should be kept around as the team’s kick returner. He probably has some juice that he can offer on offense in small doses as well.

The Eagles will not be spending significant resources on a free agent running back. If anything, they could look to add a low-cost veteran for the sake of competition. Marlon Mack and Samaje Perine are free agents with notable connections to Philly’s coaching staff.

The Eagles could look to take a running back on Day 3 and / or invest in the position through undrafted free agency. It’d be nice if they could find a tough, physical runner in the Jordan Howard mold. I really love Kenneth Walker but he’ll go higher than the Eagles are willing to take him.

While Kevin Durant requested a trade last week and the Brooklyn Nets have been amenable to dealing him away, talks have been slow...
Read more
Sports

Max Rohskopf is going to get another chance on the big stage.The one-time UFC competitor...
Read more
Load more