Home Sports BOXING Why Canelo Alvarez can not overlook Dmitry Bivol and the potential dangers...
SportsBOXING 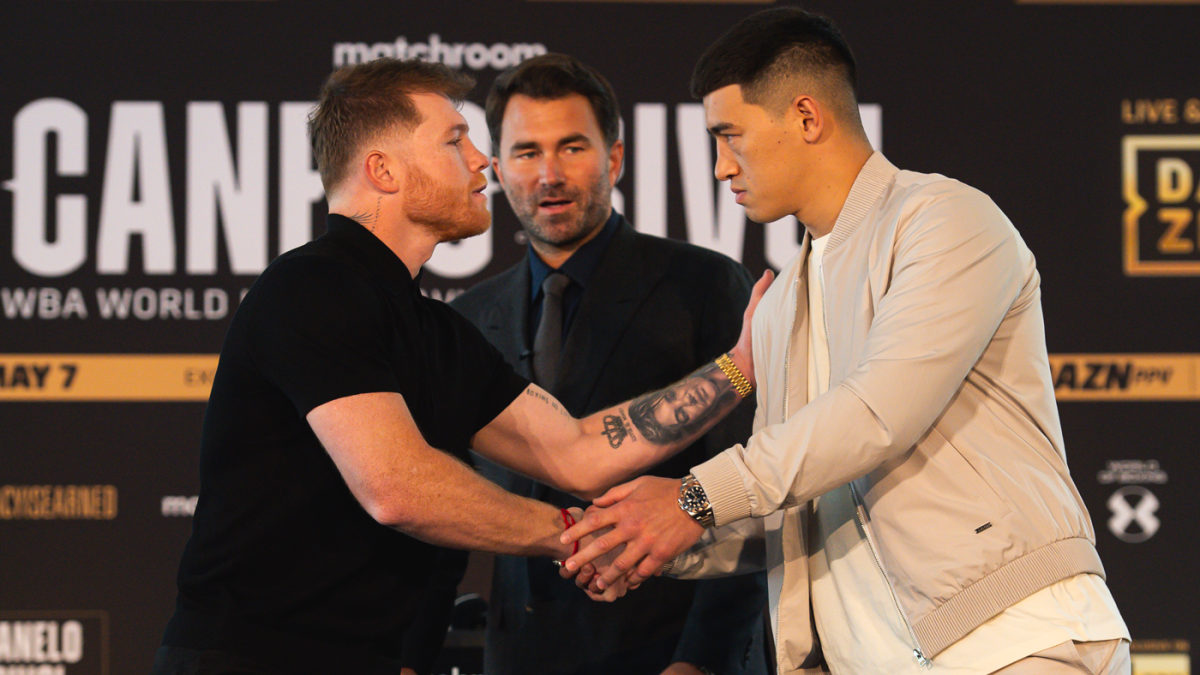 Over the past seven years, in the immediate aftermath of former pound-for-pound king Floyd Mayweather’s retirement, boxing fans have become so accustomed to Canelo Alvarez daring to be great in terms of his matchmaking that his opponents can often get lumped together.

Alvarez (57-1-2, 39 KOs), whose lone pro defeat came against Mayweather in 2013, has gone on to succeed the fighter simply known as “Money” as the most popular, richest and most critically acclaimed boxer over that span, creating his own era in the process. A big part of the Mexican icon achieving such lofty acclaim has been how well he has preserved a challenger’s mindset.

A revealing stat pointed out on social media this week by podcast host and broadcaster Dan Canobbio reminds us that the 31-year-old Alvarez will be fighting this Saturday for his opponent’s world title for the 11th time in 14 fights, a span that covers four weight divisions dating back to 2015. The only bouts not to reach that criteria were a mandatory title defense at 168 pounds (Avni Yildirim) and a pair of pay-per-view attraction events (Amir Khan, Julio Cesar Chavez Jr.).

This weekend, Alvarez is back in his familiar spot as a PPV headliner during Cinco de Mayo weekend in Las Vegas for the first time since 2019. His opponent, however, could turn out to be different than the others, only no one is talking about it.

Alvarez will move back up to 175 pounds for the first time since taking Sergey Kovalev’s WBC title in 2019 (before immediately vacating it) when he challenges Dmitry Bivol (19-0, 11 KOs) for his WBA light heavyweight belt inside T-Mobile Arena .

To casual fight fans, Bivol is just another name. The reality, however, is that this has all the makings to potentially be a trap fight for Alvarez regardless of whether he’s playing with house money by following up his history making 2021 campaign by becoming the first undisputed super middleweight champion only to move up in weight once again.

In previous years, Alvarez fights have been treated as front-page news in not just the fight game but, at times, the mainstream sports world at large. This time, however, the Bivol fight feels like it has snuck up on the boxing calendar, overshadowed in recent weeks by Tyson Fury’s return in front of 94,000 fans and a Katie Taylor-Amanda Serrano thriller billed as the biggest fight in women’s history.

The lack of sustained buzz leading into the fight has somewhat clouded the actual challenge that the 31-year-old Bivol, a native of Russia who was born in Kyrgyzstan, actually brings to the table. One has to look no further than the betting odds to see the real danger of this fight illustrated.

Bivol opened as just a +250 underdog, which is the closest thing to a pick ’em bettors will get in wagering on Alvarez in recent years. Although Bivol has swelled to as high as +400 depending upon the oddsmaker, he still has the best shot of any recent Alvarez opponent in terms of odds not named Gennadiy Golovkin or Daniel Jacobs.

The reason why that is interesting is because many observers feel Golovkin did enough to beat Alvarez in both of their PPV meetings despite some very disputed scoring. Jacobs, meanwhile, pushed Alvarez to the limit of their 2019 middleweight unification fight before being edged out by scores of 116-112 and 115-113 (twice).

Bivol, from a physical standpoint, is a much different animal than anyone Alvarez has faced considering his four-inch height advantage mixed with his dominant technical skill crafted throughout a lengthy and decorated amateur career featuring two gold medal victories at the junior world championship level.

For whatever Bivol lacks in name recognition or highlight-reel finishes, he makes up for a critical acclaim as one of the best pure boxers in the game. He’s also the much bigger fighter who will be allowed to contend at his preferred weight despite previously saying he would cut down to 168 pounds if that’s what it took to draw Alvarez.

The truth for Alvarez is that he quite literally could’ve fought anyone he wanted for his return. His critics, which remain a dwindling bunch given his astronomical success, pointed out how much money he turned down to stay at 168 pounds. In fact, Tom Brown of TGB Promotions revealed this week the exact offers Alvarez received from Al Haymon’s Premier Boxing Champions for fights against Jermall Charlo ($ 45 million), David Benavidez ($ 55 million) and even a 164-pound catchweight fight against welterweight champion Errol Spence Jr. ($ 55 million).

Alvarez, who chose a multi-fight deal instead with preferred promoter Eddie Hearn and the streaming network DAZN, has even been accused of some of outright ducking Benavidez although the choice of Bivol remains in line with his consistent (and rather lofty) of seeking history and world titles above merely glamor or financial reward.

The thing about choosing Bivol, however, is that he’s incredibly difficult to look good against given his defense and fundamentals. He has also had a string of somewhat boring title defenses against opponents either unwilling or unskilled enough to push him beyond his comfort zone, which have conveniently hidden just how good he is.

From a statistical standpoint, Bivol trails only Golovkin (10.1) in the category of jabs landed per round with 9.7, according to CompuBox. In his most recent title defense against Umar Salamov in December, 76% of Bivol’s attempted punches were jabs.

Can’t get enough boxing and MMA? Get the latest in the world of combat sports from two of the best in the business. Subscribe to Morning Kombat with Luke Thomas and Brian Campbell for the best analysis and in-depth news.

In fact, Bivol landed more punches in Round 7 of that fight alone than Salamov did for the entire 12 rounds. Bivol is also an exemplary combination puncher who is very good at beginning his offensive bursts to the body in order to bring down the higher guard of his opponents.

The thing that ultimately separates Bivol, however, is his defense. Opponents land just 5.8 total punches per round against him, which is second to Demetrius Andrade’s 5.1 and well below the CompuBox average for all fighters of 16.4. Bivol also leads all other boxers, including the likes of Vasiliy Lomachenko, Shakur Stevenson and Alvarez, with a plus / minus rating of +20.3, which subtracts a fighter’s opponents connect percentage from their own.

Bivol is also ranked first in fewest punches landed per round by his opponents at 5.4, edging out Andrade and Tyson Fury for the top spot.

Should Alvarez go on to claim yet another 175-pound world title on Saturday, there’s no telling what he will do next as he continues to zero in on passing the great Julio Cesar Chavez Sr. as the best boxer in Mexico’s great lineage of champions. But make no mistake about it, there is nothing easy about the challenge he must first pass to get there.

Alvarez will need to be just as patient as he is precise in a fight that feels increasingly more difficult as the days get closer.

Who wins Canelo vs. Bivol? And which prop is a must-back? Visit SportsLine now to see Brandon Wise’s best bets for Saturdayall from the CBS combat sports specialist who crushed his boxing picks in 2021, and find out.

Tom Olsavsky is the vice president of research and...
Read more
Sports