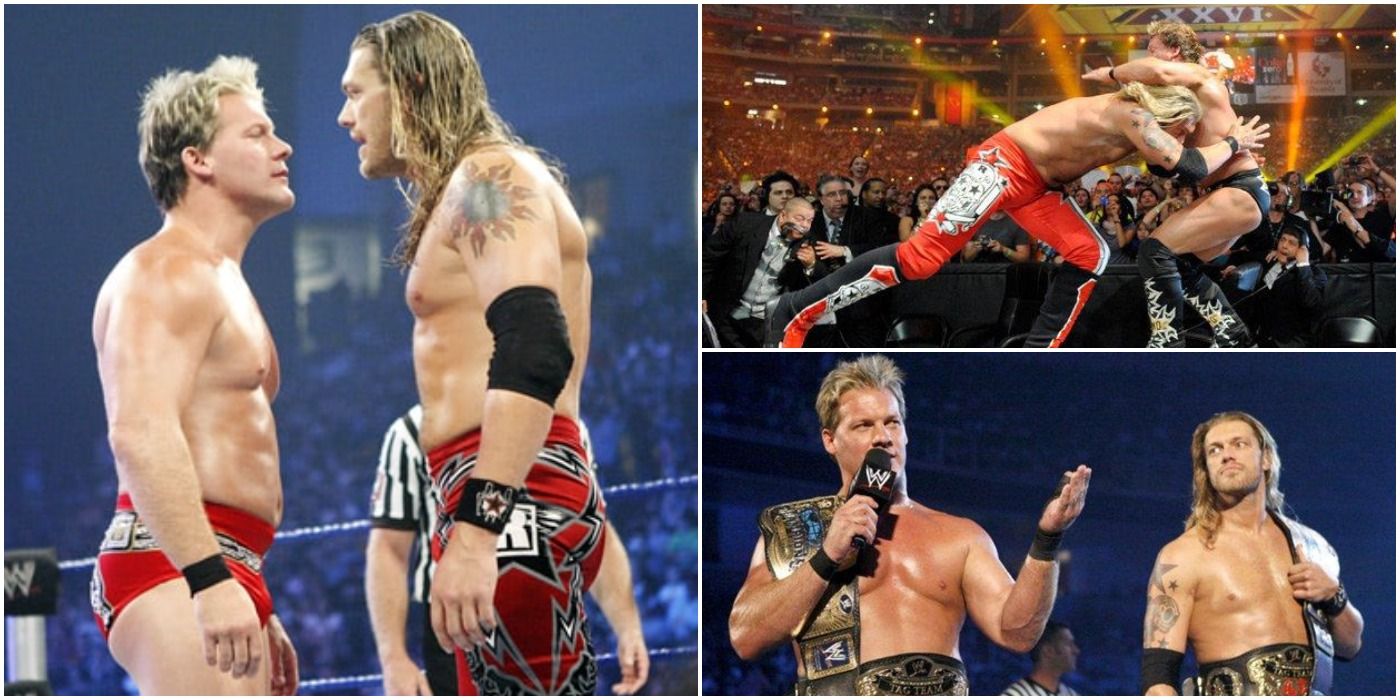 Edge and Chris Jericho are two of the biggest legends in WWE history, with longevity in their careers and a huge number of championships accumulated between the pair. In 2010, they had a rivalry that should have been an all-time classic. However, for quite a few reasons, their feud underwhelmed in several ways, making their time at odds with one another being a huge, missed opportunity and a big disappointment for WWE.

Over the previous two years, Edge and Jericho had been two of the biggest players when it came to world titles in WWE, each carrying the World Heavyweight Championship and WWE Championship respectively, each being the biggest heel on their own brands. In the summer of 2009, Jericho had been out of title contention for a few months, and Edge was coming off a few losses when challenging for belts, leaving both men outside of the main event scene. As is usually the case in WWE, the tag team division needed a boost, so WWE made the decision to add these two legitimate main eventers to the Tag Team Championship match at The Bash.

RELATED: Chris Jericho & 7 Other Wrestlers Who Have Surprisingly Only Been In One Stable

Being the two wily veterans that they are, the pair managed to defeat The Legacy and The Colóns to win the titles. This could have set up a great run, revitalizing the tag team division, but just a month later, Edge suffered from a torn Achilles tendon, ruling him out for the foreseeable future. Instead of supporting his partner, Jericho decided to insult and advise Edge in his absence, mocking him whilst replacing him with The Big Show. Jeri-Show would go on a great run as the champions, before losing the belts at the end of the year.

Edge’s Rumble Return Set Up A Feud With Jericho

In the 2010 Royal Rumble, Jericho was one of the last entrants, and after taking down some of his opposition, Edge made a stunning return as the next entry to a thunderous ovation in one of the more memorable returns of all time. He targeted Jericho straight away, whose face told a great story, and eliminated him from the match, before going on to win the whole contest himself.

In the following months, Jericho would emerge victorious in the Elimination Chamber match for the World Heavyweight Championship, stealing a victory from The Undertaker. Once he won the match, it was clear who he would be targeting. He would ambush Jericho on Raw, announcing that he would be going one on one with him at WrestleMania. One unique part of this story was that it was the first time in over five years since Edge had been a babyface, and the fans were strongly behind him. With Jericho still doing some of the better heel work of his career, it should have been a great formula, especially given their history.

The Rivalry Between Edge & Jericho Never Truly Heated Up

For whatever reason, the feud never really heated up too much. Whether it be the strength of stories elsewhere on TV or just a lack of personal animosity they created, the hatred in their feud did not reach second gear, with the feud running through several tropes on the Road to WrestleMania. It was still fine but could’ve been a lot more memorable. However, a great match would have silenced any doubts or disappointments from the rivalry.

After a match that was months in the making, with a huge return and Rumble win for Edge, the natural progression of the story was surely a big win over his former friend-turned-enemy, winning the World Heavyweight Championship. The pair wrestled a solid match, but their dislike for one another did not really come out, with it being wrestled cleanly and without much intensity. To make matters worse, Jericho cheated to keep hold of his title, which felt like a cheap way to end a WrestleMania championship match. Following the finish, Edge would stand tall by taking out Jericho, but it did not mean much considering he’d just lost.

The feud looked to carry on, hopefully with Edge winning the belt down the line, but the following week, Jack Swagger cashed in his Money in the Bank contract to win the championship, taking it out of the feud between Jericho and Edge. The pair would have a blow-off match at Extreme Rules in another solid match, but it was far from a classic. Over the next few months, Edge would turn heel again, and he and Jericho would get back on the same page anyway during a feud with The Nexus, and then Edge would turn face not long after, with his character flip-flopping. The execution and the follow-up were all a mess, and WWE ruined a chance in creating a personal, hot rivalry.

Edge is one of the best WWE wrestlers of all time, but he had quite a few storylines that were not very good, and some that were just awful.

Andrew Kelly is a writer from The Wirral, England. He is an MA Graduate from the University of Manchester, and a BA Graduate from Liverpool John Moores University, both in Creative Writing. Can be found on Twitter @ andrew_kelly0

A pair of French players are provisionally suspended pending an investigation of corruption charges against them.French players Mick Lescure and Jules Okalahave been...
Read more
GOLF