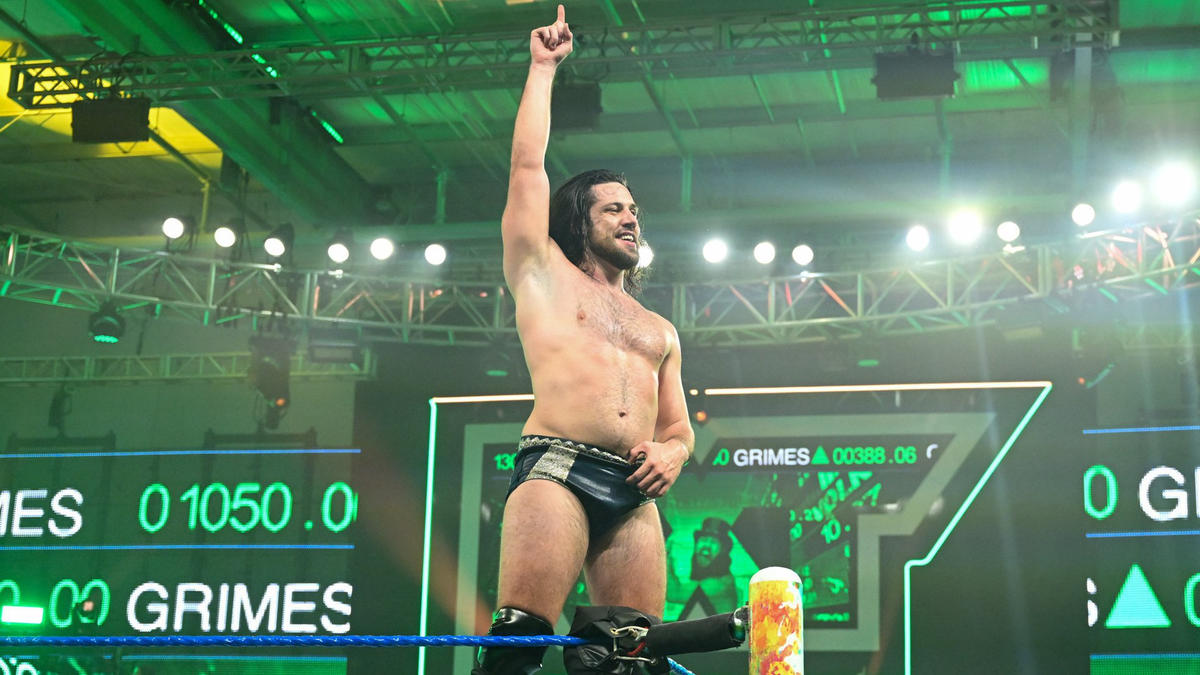 MSK’s quest for back-to-back Dusty Cups is still alive after a fast and furious showdown with Jacket Time in the opening round of the tournament. The two highflying duos flew around the ring in order to punch their ticket to the semifinals in a jaw-dropping, heart-racing battle.

After a chaotic flurry, Kushida tried to cinch in the Hoverboard Lock, but Nash Carter rammed him into the turnbuckle for an unseen tag to Wes Lee, who hit the assisted blockbuster for the pin.

Santos Escobar is furious about all the opportunities Bron Breakker has been given and his NXT Championship victory only makes Escobar sick. Catch WWE action on Peacock, WWE Network, FOX, USA Network, Sony India and more.

Santos Escobar took to the ring to explain the disgust he has for new NXT Champion Bron Breakker and all the opportunities the young titleholder has been given. It did not take long before Breakker came to the ring to respond to Escobar, goading “The Emperor” into making a challenge.

Escobar, however, left Breakker without an answer as Joaquin Wilde and Raul Mendoza attempted to jump the champion as he left the ring. The attempt backfired when the new NXT Champion knocked both attackers out of the squared circle.

Solo Sikoa survived a ruthless No Disqualifications, Falls Count Anywhere Match against Boa that left both competitors scarred as they tore apart the NXT Arena and one another.

The action started before the bell with Boa attacking Sikoa on the entrance ramp as he made his way to the ring. The two heated rivals used all manner of weapons, including Kendo sticks, chairs, trash cans and ladders, as their warpath raged backstage before finally spilling back into the arena.

Battered and bruised, Sikoa planted Boa on top of a table outside the ring and climbed to the top rope for an awe-inspiring splash that shattered the table beneath Boa, keeping the Tian Sha disciple down for the three-count.

Guru Raaj looked to get retribution for Duke Hudson’s attack last week, but he could not get out of the gates as Hudson drilled Raaj with a big boot to the head right as the bell rang. Unleashing a new aggression, Hudson decimated Raaj before hoisting him up for a monstrous Razor’s Edge and the pin.

After the match, Dante Chen appeared in the entranceway and stormed the ring to attack Hudson. The two Superstars had to be separated by referees, but Hudson slipped through their grip to hit a thunderous chop block to Chen’s rehabilitated leg.

From the start, Kay Lee Ray was champing at the bit to get her hands on Mandy Rose. The NXT Women’s Champion wisely tagged out of the match, but she could not avoid “The Forever Champion” for long as Ray tossed her to the outside before diving off the top rope to take out the entirety of Toxic Attraction.

Toxic Attraction gained the advantage and isolated Indi Hartwell in the ring, knocking Persia Pirotta off the apron to prevent a tag. As the match broke down, Ray leveled Rose with a superkick before grabbing her trusty bat and chasing Rose out of the ring and up the entrance ramp, leaving Dolin and Jayne to fend for themselves.

Back inside the ring, Pirotta caught Dolin and planted her with a sit-down facebuster to pin the NXT Women’s Tag Team Champion.

The seasoned Grizzled Young Veterans sent Andre Chase & Bodhi Hayward back to school in their Dusty Classic First-Round Match. After a hopeful start, the up-and-coming Hayward tagged in to save his mentor from James Drake & Zack Gibson unleashing a burst of punishing offense, but the inexperienced Superstar fell for a quick distraction by Gibson, which left him exposed to a pair of knees to the face from both members of GYV for the pinfall.

As GYV celebrated their victory next to the Dusty Cup, Von Wagner attacked the downtrodden duo of Chase & Hayward. An onlooking, smirking Robert Stone announced Wagner was under new management.

“Daddy’s Little Princess” was no match for The Queen of the Sky as Io Shirai made quick work of Tiffany Stratton. Shirai endured a surprising and acrobatic flurry from Stratton until she turned the tide with an open palm strike and running knees in the corner before landing a picture-perfect moonsault for the 1-2-3.

Cameron Grimes earned himself a date with Carmelo Hayes for the NXT North American Title at NXT Vengeance Day after outlasting Tony D’Angelo thanks to a little help from an angry Pete Dunne.

Locking horns for the first time ever, Grimes and D’Angelo put on a show that had the NXT Universe on the edge of their seats as the two Superstars exchanged devastating blows. With Hayes and Trick Williams watching from the rafters, Grimes and D’Angelo traded suplexes, backbreakers and superkicks before D’Angelo rolled out of the ring to avoid a Cave-In.

As D’Angelo caught his breath at the announcer’s table, Dunne appeared out of nowhere to smash a cricket bat across “The Made Man of NXT,” who rolled back into the ring and right into a Cave-In to give Grimes the victory.

Article by Justin Lui from In Sheep's Clothing Hi-Fi Part 2 on how the French singer “borrowed” from the Nigerian drum master. (Editor's note: this...
Read more
NBA